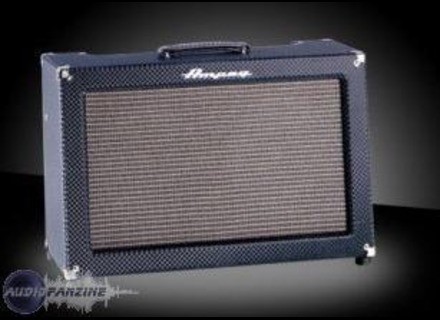 Ampeg R-212R
5
The Ampeg R 212 R Reverbrocket is a tube guitar combo amp that has two channels.  It delivers 50 watts of power and as the name states it has two 12" speakers.  It has two 1/4 inch inputs for your instrument as well as line in and line out connections.  It has parameters for treble, middle, and bass, as well as gain, reverb, and volume.  The tube configuration is pretty basic as it has two 6L6s and three 12AX7s.

Using the Ampeg R 212 R Reverbrocket isn't hard at all as the make up is pretty basic as far as combo amps go and those with any experience with other combo amps of this nature won't have any trouble deciphering what is going on here.  Everything is laid out nicely and I've never had any problems getting it to do what I want it to do.  I haven't seen a manual for the Ampeg R 212 R Reverbrocket so I can't say how helpful it would be or not.

The sound quality of the Ampeg R 212 R Reverbrocket is pretty top notch.  It has a really fat and warm sound that you would expect from a tube amp and I'm really a big fan of that type of sound.  It sounds great for both lead and rhythm guitars as well as clean or with some drive.  I usually use it with a Fender Strat or a Gibson SG for recording and these both sound great through it in their own ways.  I don't usually use effects with this amp as I find that the reverb and gain are enough for me most of the time.

I've been using the Ampeg R 212 R Reverbrocket for about a year or so for recording at the studio that I work at and it is really a great sounding amp.  While I've only used it for recording, it is more than suitable for live shows as well as it isn't too hard to bring around but of course packs a big punch.  When I think of Ampeg I of course think of bass guitar amps, but this is a fabulous guitar amp that rivals some of the best out there.  If you are looking for a great tube amp, the Ampeg R 212 R Reverbrocket is definitely one of them, but you will have to get one used as they no longer make these.

tom66's review (This content has been automatically translated from French)

A bomb! There are not 36 different sounds, actually has a y '. But which one! He has a singing and musical side, it gives a beautiful color. Originally it develops 50Watts, which gives it a huge margin in the clean sounds: the sound is crystalline even at unreasonable volumes (and the original configuration, the clear sound at high volume is one of the best that I 'I've heard tube amps from the mid-range: hot rod, classic 30, marshalls etc). I made mine in Retube 6V6, which has the effect of dropping the power 20Watt: missing the beautiful clear sound, but for the blues-rock that I am upset I have gained by the change: when I play volume repeats the crunch, it gives a wonderfully messy results with double coils of my Italia Maranello. And whatever the guitar I always comment on my packed sound.

The reverb unit was very successful, but a spring let go and I had to put the reverb of a Marshall Valvestate lying. It sounds but no more.

I use it for more than two years and I had the opportunity to play a lot of amps of this type. It is as personal opinion but I think it surpasses by far. And what a mouth he with his checkered Tolex grille and bright!

Otherwise we have to admit that it is sometimes capricious, it is rather slow to heat and it sounds not always the same, the same place and with the same settings (but the sound is beautiful every time). In short, a living amplifier. I also had a problem with taking the footswitch to change channels every turn. A small welding and it's done. Plus the history of reverb, it's still a lot, but sound like it is the discount price is then y 'savings after candles were made that it is on!