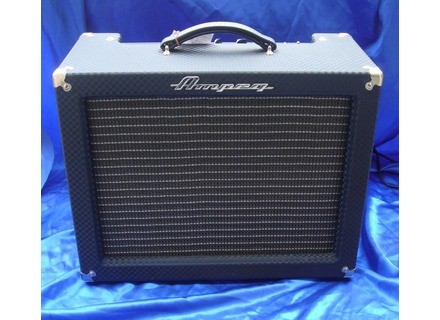 Ampeg SJ-12R
5
This is a tube amp with a power of 50W. There are two entrances: guitar and accordion (!). The settings are: bass, middle, treble, reverb and volume.

A footswitch to control reverb and a boost of about 15db with it.
No effects loop.
It weighs only 16 pounds.

This model was released less than his brother, the Superjet 12T, which includes a Tremolo.
The Superjet was launched in the 60s. It was reproduced in the late 90s.

I play it with a guitar in aluminum shaft (Electrical Guitar Company). The sound is very clear and bright. I use a Boss GE7 to increase my bass a little but it comes more than a guitar amp.
With a fuzz, it tears.

I use it for two years, as repeated on stage. I used a Fender Bassman 50 prior to 1969 with a Mesa Boogie cabinet.

This is great with this amp is to have the same power, his lamp in a combo of 16 kg.
However, I am not using the footswitch. I can not find the boost very interesting.

I had paid $ 250 on Ebay after having tried several with friends in Chicago. It cost me $ 120 more to bring the U.S. (in fact I use a transformer to plug 110/220V). I find this very reasonable price for an amp all lamps.

I do it again ten times that choice.