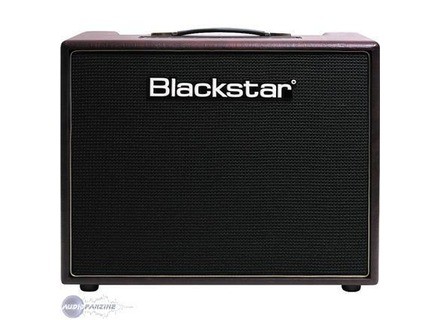 Blackstar Amplification Artisan 15
4
Wow this company keeps pumping out the goods. They are effectively design and marketed great quality and sounding amplifiers. Many touring and professional artists all over the globe are now turning towards Blackstar for their guitar amplifier needs. The have successfully taking a huge niche in the market over the last few years.

This amp is the ultimate in low wattage tube powered amps. This amp puts out some heavy tones for being a little practice amp. The pentode and triode modes are essentially a wattage cut which is almost in half which a lot of 100 watt amps will have a 50 watt cut in power. What this does is change the dynamics of the amp as well. You will be able to get a squishier tone from the triode 5 watt mode since you are cutting the power by more than half. You tone and attack will feel a little bit more spongy and saturated. You don't get any more gain at this setting as you would the 15 watt pentode mode, but you will feel the amp gets more saturated and looser in the feel. This is completely the result of the power section being reduced to a smaller wattage and in turn changes the feel of the amp. The biggest portion of a feel of an amp comes from the power section. This give you the attack in a tight setting or a looser setting. The preamp simple voices the amp but the power section is all about feel and dynamics.

At new these amps come in right at around $1899, which is a bit high for an amp at this wattage. I think this one is made in the UK where as many of the Blackstar's other amps are built in the China.

Blackstar Amplification Artisan 15
5
(Originally written by quanticman/translated from Audiofanzine FR)
This dual channel tube amp uses two different tubes in each channel. The first channel has a British sound and the second one an American sound with a more compressed response and more gain. Both channels complement each other. You can use both channels simultaneously. The result is a stunning sound with the possibility to adjust the character provided by each channel.

The amp offers two operating modes: single-ended or push-pull (with 5 or 15 watts). I personally use the 5-watt mode because the other one is much too loud for the room where I play, even with the whole band. The 15-watt mode is useful for live gigs.

No FX loop but I wouldn't use it anyway.

Settings: volume and tone controls on each channel. It's perfect for people like me who prefer to play the guitar instead of experimenting with their amp.

This amp would be perfect with an integrated reverb.

It's a boutique-style amp made in Korea. It doesn't have a PCB, everything has been hand-wired point to point.

The amp has a Celestion Vintage 30 speaker, cool!

Easy to use: just plug in and play. If you want more crunch simply increase the volume. For another sound character simply change the channel.

In spite of this simplicity you can spend hours trying to find a new sound (the tone control depends on the volume).

It's a class-A amp so you can also use it as an additional heater in winter...

The clean sound is quite amazing... It's your guitar's raw sound. I don't know if you've ever tried to play an unplugged electric guitar putting your ear against the body... With this amp you get that particular sound! It sounds crystal-clear and it blows me away every time I play it.

The amp has a huge dynamic response to faithfully replicate your playing.

The second channel produces a very nice crunch sound (think The Who Live at Leeds).

The distortion sound is wonderful but it requires too much output power so I have to use effects pedals to get distortion at lower levels in my room. I own a Blackstar HT-Drive, which has a similar sound. But the distortion of the amp is richer.

I've had this amp for over one month and I won't sell it, ever. My quest for the perfect amp has come to an end. The amp is ultra sturdy and I want to keep it my whole life.

The value for money is very good for a hand-made boutique amp.

People at Blackstar made a good and professional product.
Did you find this review helpful?yesno
»

foreign devil on the silk road's review (This content has been automatically translated from French)" I'm keeping this one!"

could not be more simple, whatever the guitar (Jazzmaster, Strat and custom telecaster fmt with mississippi queen for me) it sounds live because there are minimal components between the guitar and the hp!

this is amp is a monster "tone".
Channel 1 is the essence of the Marshall sound, with a really beautiful clean (yes!) and a Crunch I have not found on any of my previous amps.
Channel 2 is more round, some say vox, fender other way old tweed. incredible in clean, more compressed Crunch channel 1.
pure happiness even magnified with a A / B box, the 2-channel mix is ​​fabulous.

I have since 3 months, found used after the untimely death of my mini Hayden mofo. I loved Hayden, but then we change dimension. dynamics, depth and character of the sound that comes out Blackstar make this a truly incredible amp, despite is apparent simplicity, this is proof that there is less better it sounds.
I versin with the greenback really nice, but in my 2x12 with hp Tayden (a true brit brit and great), and although the sound is even better!
advice, however this amp really deserves him up with good lamps NOS, you will not regret the investment. Although ADP origin are very honorable.
I Retube mine as follows:
V1 Raytheon 12AX7 black plates 1955 for channel 1
V2 ef 806S tesla 70's for channel 2
Baldwin 12AX7 v3 1962 (sylvania) for phase inversion.
2x EL84 power tunsgram NOS: rock n roll baby!
a tesla EZ81 NOS grinder: the seat of the sound is even better, the monstrous sag, it seems to have a wall of his indestructible!

the amp is transformed, magnified, as if it were still possible. I do not divide them! I put this config with 10 lamps and hp Tayden

millezotla's review (This content has been automatically translated from French)" Pure sound!"

Blackstar Amplification Artisan 15
5
2 EL84
2 ECC83 for channel 1
EF86 1 for channel 2
1 Grinding
No effects loop.
Tolex covered with a beautiful burgundy and sound quality.
On mine, Vintage 30 HP, but you can find it with a 20w rola greenback.
I have seen many a leather handle for connection with the vintage side plates and vent, I will clearly seen in chrome.

I give my opinion hot with very little time to use. I will complete this later view.
First channel 5w, clear sound, the tone was at 13:00, ouaaa fairly acute, so I declined. What a beautiful sound, but the tone is 9 or 10 o'clock. I pushed the volume gradually, what is good. Pickup, stick a treat. At bottom, this is good. Channel 2 crunch that much sooner and it goes a little further saturation.
Mode 15W! The is something else, already, we can raise the tone, the dynamics of this amp! It's pretty fabulous. The more I turn up the volume, the more I cry of happiness, what crunch. Channel 2, ditto, crunch it faster, but with more bass than 5W.
Tests with a Greenback (G12M), the sound is softer, warmer, we can increase the tone in 5w. I think the Vintage 30 is not appropriate in this amp. I tried a little while linking two channels, a lot of possibilities.
The low input can have a clear sound over a larger stroke knob. But the best of these entries is to connect the pedals. A feast for the overdrive and fuzz distos because the sound is so pure on these inputs.

This amp is excellent! I'll probably revisit some of my views on some amps down.

Did you find this review helpful?yesno
»
Read the 5 user reviews on the Blackstar Amplification Artisan 15 »