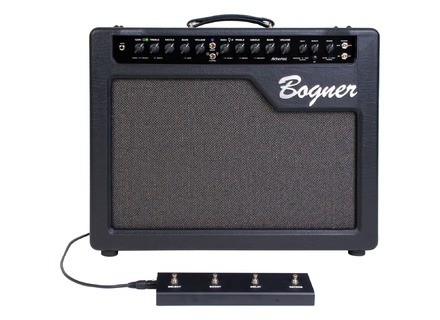 Bogner Alchemist Amp: Turning Lead Guitar into Gold Even from childhood, in his native Germany, Reinhold Bogner was already skillfully wielding his soldering iron to create his own guitar amps. After he moved to Los Angeles, his models and amp modifications began to attract famous names from the six-string world including Steve Vai, Steve Stevens, and Eddie Van Halen. So when it was announced that he was putting out an amp made in Line 6's factories that would cost less than $1500, it made a big noise. Read more…

Bogner Alchemist 212 Combo
3
Allow me first to say that I am a huge Bogner fan. I love just about every amp that I have heard from Reinhold and crew and even the Line 6 amps they partnered with sound pretty good. This amp just doesn't do it for me. For the only usable tone was the uber high gain mode which was not that good. The amp was very forgiving in its attack and presence, but the gain was really fizzy. I know that Bogner's tend to have a little fizz which is totally subjective in whether you like that or not. Even still I couldn't get past the one trick pony that makes this amp.

The amp was pretty easy to figure out. It didn't take me very long to get the best tone I could get from it, but for me the amp was very lacking overall. I never played it in a band setting so I am not sure how well it would cut in the mix, but the tone was not that pleasing to the ear.

I used a Gibson Les Paul with the amp. It was a '59 VOS which was very nice and sounded great but it just couldn't get this amp to sound the way I wanted or thought a Bogner should sound like. I understand that this is on the low end for Bogners and I believe that these amps are made in China which is a big disappointment too.

Nothing about this amp made me feel like I was using a Bogner. I love the Twin Jet's and the XTC's but this amp just blew. It felt and sounded cheap. I couldn't dial out the cheap sound or feel to it. At new these amps come in at around $1099. Not overly expensive but not worth the money either.