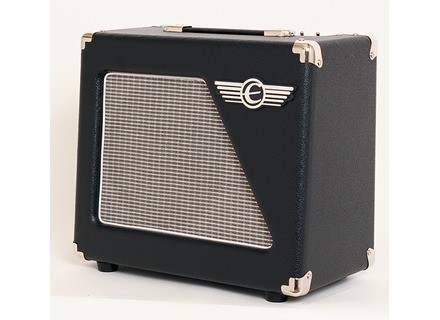 Epiphone Galaxie 10
4
Bought from Musicians Friend for $199.00. What caught my eye other than the fact that it's all tube was the cool retro look it has. Looks like it stepped right out of the '50s. Plus it's blue & I've never had a blue amp before.

O.K. Here we go(deep breath). I really like the fact that it's a tube amp. It came stock with a Celestion speaker(10") & Sovtec tubes(6L6 & 12AX7). It's rated at 10 watts but since it's tube powered it sounds much louder. It works well as a practice amp but I suppose it could do a small venue so long as the drummer can control him/herself.(Which mine cannot). The appearance is very noticable to say the least. Everyone that see's it loves it & once it gets crankin' they're suprised at how loud it actually is. Tone is pretty good with the stock tubes but I changed them out for more headroom.

Seems built well but with all tube amps it's going to need maintenence sooner or later.

For $200 you can't go wrong. I swapped the Sovtecs for a Svetlana power tube and a new style chinese preamp & couldn't be happier with the tone. Much better headroom & dynamics. Since I am a blues player, the smooth high-end rolloff was just what I was after. This is a great little amp for the money & with a Strat plugged in, it produces a really sweet tone.

Epiphone Galaxie 10
2
This is a 10 watt tube amp with a single 12AX7 pre-amp tube and a 6L6 power tube. It has a 10" speakers and is capable of putting out a fair amount of power. Unlike the later Valve Jr.'s that Epiphone produced, this amplifier runs on a different power tube and has tone controls, gain controls, and a standby switch in addition to the a power switch. It has a single channel.

This amplifier makes it easy to get a solid tone. The more you push the volume section, the greater the amount of tube warmth this amplifier puts out. This makes for some excellent tones, especially when the amplifier is pushed. Be careful not to push it too hard!

This little combo can produce a wealth of different sounds and tones. Even without using a distortion or overdrive pedal, a fair amount of breakup can be achieved, similar to an Eric Clapton-type tone. With a distortion pedal you can rock on and on in all sorts of heavy metal territory. As mentioned above, you just have to be sure not to push it too hard.

I really liked this amp for the 10 hours or so I rocked hard with it. If you haven't figured it out yet... I pushed it too hard. I tried changing the fuse, the tubes, I just couldn't get it to work again. Worst of all, it croaked out on my on-stage at my band's last show. We were playing our last show at a big club that mics all the amps, so it didn't matter how puny my amplifier may have looked propped on a chair on stage because the tone was amazing for that night. Unfortunately, it died halfway through our set and I had to scramble to set up another amp (always carry a backup!). This was really disappointing, because I really dug the tone from this amp, especially at the closeout price at which I acquired it.
Did you find this review helpful?yesno
»