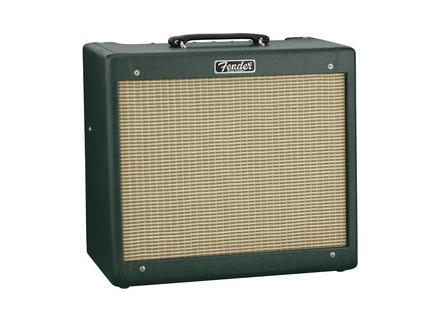 Fender Blues Junior III "Emerald Green"
4
It has a dark tone compare to a plexi or a Marshall 800 that really compliments the character of a Fender Stratocaster . Since the Strat seems to be on the thinner side of guitars the darker tone gives it a more robust tone that accept pedals really well and sustains easily.

This amp is the exact same feature wise as the regular blues jr. There are some new editions to this amp that make it stand out of the pack. first you get a cool looking forest green tolex covering and a sharp looking wheat brown grill cloth. Next you get an upgraded Eminence speaker that sound phenomenal with this amp. Then finally you get a better set up tubes that better match the prowess of this amps tone.

This amp is a cool little amp for practicing or playing small gigs. This amp is only rated at 15 watts of power so there isn't a lot to play with in this amp. You can't get huge volumes with this amp, but it does work well when you need a small amp for smaller gigs or something to practice at home with.

The amp have a genuine tone that is reminiscent of the old amplifiers from back in the 60's. This amp carries a great blossoming tone that fills the air quite well with rich warmth and a fantastic blend or the new and old features. The amp doesn't have that many newer type of features that many modern amps have but it does have a fat boost for adding a little bit of girth to the tone if you are playing with a thinner sounding guitar or your pickups might be a single coil. If you play with a Fender Stratocatser or a Fender telecaster you will probably have that fat boost on at all times die to the brightness of those guitars and the thinner side of those tones.

This may be one of the most heavily used amp that has ever been created. The Fender Blues amp is such a great little amp and the price point for the tube amp is fantastic. Many players have bought into this little amp because of the aggressive price and the just the way that it sounds. At new these amp come in right at around $529. Not a bad little price for a cool looking and upgraded speaker tubes and tone.

Fender Blues Junior III "Emerald Green"
4
Tube amp, single channel, master volume bass treble and reverb medium I think. Includes reverb, 15w power which is huge for an apartment! Do not expect the cruncher in your attic room in Paris unless your neighbors are deaf. So we can say that it is not at all versatile.

Setup is simple, the manual is not used much. A self try and adjust to taste. I will say that there is no good setting. Good sound is not as easy to find what I've read since force to use one becomes more accurate.
To cruncher and maybe more I use a TS9. Without this it is frustrating to have apartment because we can not saturate.

I fought to get it and I finally got a display model. Despite this, I think the speaker was not quite smoothly. Now I find her beautiful, very clear and precise.
However it is susceptible to the attack which is an advantage when you have a good level and it is well known to nuances in his game but becomes a disadvantage when there is a lack of precision with his right hand. A compressor solve this "problem".
The reverb is very mediocre in my opinion. Beyond 4/12 you lose a lot of accuracy and it somehow seems to saturate. A kind of slam is sometimes hard to hear when you attack. From what I've read, change with a Ruby reverb.
Also emphasize versatility 0. We must plan in my opinion at least a distortion pedal.
On to the fender clean, the sound is pretty hot on this model, although this low. By saturating you can easily reach a fatter sound. This amp is very powerful, and I find it a bit flat below a certain volume (master and 2 in volume). From 3 of the sound will round. Knowing that I play on a single strat pickups, check the minimum volume with dual microphones. I think it can be a hindrance in apartment

I use it for two years and I think it is important to adjust the power because of its sound can parraitre aggressive. I once had a bugera V5 and it is not clear plays in the same category. Beyond from 5 to 15w, the sound is much more accurate and very nice.
I had a heart stroke seeing this model and I found it warmer and rounder than the blues junior base.
I regret that there is no headphone jack for the rest I knew what to expect: a vintage amp, versatile but not very tolerant pedals with a clean fender!
€ 600 I find it expensive but still fun is waiting for you. The build quality seems good and there are no cosmetic defect. I appreciate the plate "limited edition".