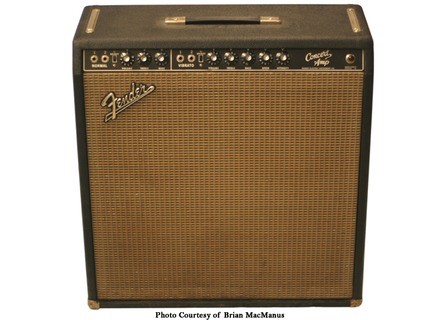 pesji's review (This content has been automatically translated from French)

These four speakers of the 12'sont Custom Design by Jensen.

It has two channels (with input jack 6.35) as usual on the Fender models from this period ie a Normal channel with volume, Bass and Treble. The second channel has for its part: volume, bass, treble and speed (vibrato) and intensity (for vibrato). The settings include a common set of presence.

it is fitted in the back of a polarity inverter and a switch and a stand-by. It also has a speaker output and additional connectors for the vibrato pedal switch.

Ultra Basic Configuration Plug and play as the Americans say. By far the best amp I ever owned. Sound of great breadth and richness in the bass that does not drool and treble this but never aggressive (big flaw recent models of the brand). The vibrato being sort of the icing on the cake as it gives a very soft and its coupled with a reverb lambes is a treat. Tremolo Jimmie Vaughan Swamp Blues Slim Harpo a real treat. A slow and clear agreements flirt fast enough on the side of Isabella Hendrix

It is perfect for my style I play in a trio of Blues and Soul of a group of 10 musicians and you hear me no problem with the combination Stratocaster Vintage Reissue 57 (mappleneck) and the Concert Amp!

I use outside of a Start Telecaster Esquire (Japan) for the slide and dobro johnson for semi acoustic gigs.

No fat saturation on this amp is the Fender Old Style 100% crystal clear sound and nice crunch when you push the amp in the trenches. In chorus the addition of a Tube Screamer life much easier: o)

I love the richness and warmth of the sound of this amp and above it quickly becomes addicted to the unique Vibrato fabulous!

I have this amp for over a year, one complaint it is heavy and large transformer 4 HP weighs ca! After having successively a Music Man RP112, a bassman export 50w and a Fender Pro Junior, a Blues Junior (great for small gigs) and finally a Vibrolux Reissue (too aggressive in the treble and too much background noise), j 'I really found the perfect amp for my style of music.

This amp being a 1963 vintage in perfect condition, price is very high (€ 2500) but the Holy Grail worth some sacrifice and for the price and scarcity of the amp not to mention that everything is welded by hand ( no circuit board) it's worth the expense!