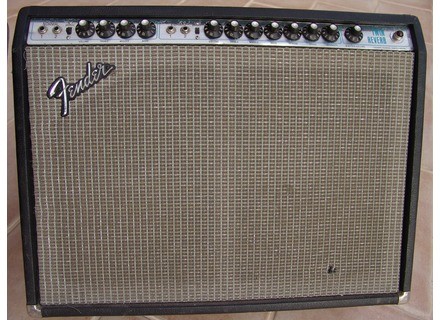 Fender Twin Reverb "Silverface" [1968-1982]
5
Fender twin reverb is one of the most highly used and recognizable Fender amps ever created. It has a great clean usable tone that is great for pretty much any kind of music. Unless you're playing metal or drop tuning hard rock music in this amplifier will work and pretty much any circumstance. It has a fantastic tone and absolute remarkable voicing that is able to take petals extremely well. This amplifier comes with two 12 inch speakers and 80 W of power. Is extremely loud and is good for any gig up to a decent size theater.


It basically has two channels even though they're not foot switchable as you would think of modern amplifier to be. Most modern amps have two channels are foot switchable and usually have one for the clean and one for the game side of the amplifier. This one is basically the reverb and tremolo and the other side is basically just a normal channel. You don't have a middle EQ knob so you can't really dial in the midsection but this amplifier was created back in those days where the low-end and high-end were the most used tones because it was in a high gain amplifier. This is it a clean amplifier and you're knot going to need too much midrange section as much as you would when you have a lot of distortion and you need to cut through the band next. So when you use this with a decent tube screamer or or overdrive pedal you're not really didn't need to beds as much as you would with the marshal amp hygiene amplifier.


These amps are pretty easy to dial in and it doesn't really take a genius to figure out. It sounds fantastic when coupled with a good overdrive pedal and delay pedal. It's a basic set up in a basic design and doesn't take a whole lot of time that dial in a decent time for pretty much any music that you're going to use it with.

I really like the tone is guitar amp when you couple with the Fender Stratocaster or telecaster guitar. Using a good overdrive pedal it in a delay pedal breed of course paddle you can get some great rock and pop tones for this amplifier. It has a natural vintage tone to it that is better than the newer reissues that sender is manufacturing today. The tone of it has a nice glassy warm feel that gives a rich vintage feeling invoicing. It's highly contagious when you get this thing cranking up to loud loud volumes.


I highly recommend this amplifier to anyone he needs good clean vintage amplifier and doesn't want to spend a whole lot of money to do it. You can find these on the used market pretty easily and even in the classifieds of some forums or even eBay. Fender made a lot of these amplifiers and you could probably been fine when used cheaper than you can buy a new reissue today. I see needs at the fires go for right around $700 in this market in the used sections of say craigslist or another classifieds. They're great amplifier and when you use it to its abilities the clean tones and nice moderate overdrive tones are some of the best in the world.
Did you find this review helpful?yesno
»

Fender Twin Reverb "Silverface" [1968-1982]
5
The Fender twin reverb amplifier is a great classic sounding amplifier they get you one of the most highly used in easily recognizable tones in all of rock 'n roll music. It's a classic feeeling and virtually one of the best clean platforms you're ever going to get an amplifier. I has a wonderful voicing for just about any style of music you will need to get in overdrive pedal in some effects if you going to get the tones you need to plan a band. This is such a good starting platform for any guitarist looking for the perfect home. It takes pedals extremely well where that be over driver a distortion, delay, phaser, flange or, chorus, or any other effect or modulation pedal. This amplifiers and he uses pedals to its advantage and really bring out the best in all of the gear that you using any any cenar ale.


This amplifier is very easy to dial-in. It's basically two channels but they're not foot switchable or not selectable in any way. This is a vintage amplifier they definitely vintage tone in the dialing in or selecting your perfect tone is nothing to be very hard. You have one of the channels just for the clean tone. Any other when you're getting get the effect for the reverb in conjunction with the normal cleaning town. It has two 12 inch speakers and it's about 80 W of power so it's pretty loud when you have a chance on a clean signal. A few runner and overdrive pedal or a boost pedal or some kind you can get this amplifier really crank out some loud great tube sounding vintage tone. This is a great amplifier for any country artist country musician all the way up to hard rock player.


The tone of this or voicing of this amplifier is phenomenal. It has a great starting point for anyone wanting to use a good overdrive pedal or any of next panel. These amplifiers take pedals so well and I can't emphasize this enough. So many amplifiers of ever played sometimes take petals very well and sometimes cannot do anything outside of what it has on its own. So if you're a multi versatile guitar player or you play a lot of covers and this is good to be a great amp for you just by the versatility and taking overdrive petals affect petals very well. This is very important for those playing a variety of different music or even if you're in a band that plays a variety of different sounds are tones or songs in this is there be a good amplifier for you.

The tone of his amplifier is a very vintage tone and has that nice sound that you would hear from some of the old records of the 60s and 70s . Don't get me wrong you can definitely play this and any modern style of music do you really hear those components in tone from the old components and tone that they would've used in these amplifiers at that time. Mini boutique guitar amplifier or amplification companies sometimes use new old stock parts which will give it a vintage feel but it's very hard to get that vintage feel for me newly built amplifier.


I recommend this amplifier to anyone is looking for a great starting point in an amp. This is a great amp and very versatile for you if you use a variety of effects or petals of some sort. I seen these amplifiers as low as $700 in the used in classified markets. The market is really saturated with these amplifiers back in those days and you can find these amplifiers pretty easily if you look. These amplifiers have such a great feel and are just pretty fun to play around with if you got a good pedal boarder rack set up.
Did you find this review helpful?yesno
»

Two independent preamps allow you to plug in multiple instruments without phase cancelling and noise. Takes pedals extremely well. One of the most reliable amps around, I’ve seen these go down stairs without anything beyond tube damage.
Because the channel preamps are independent, you cannot footswitch between them, so you’re stuck with whatever you plug into. That said, you can switch reverb and tremolo in and out on channel two.
These are incredibly heavy, so not the best amp to be running around with, but the casters are well made and make transportation a little easier.

Just incredible. Silverfaces knocked pretty hard, but if you can find an earlier one, they sound great (anything before 1972 would be killer). After CBS bought out fender, the very early ones are pretty much unmodified blackface amps. CBS later added a master volume knob, and then a master volume pullout boost. Each of these changes is a good signpost for circuit alteration and decreased desirability/change in tone.
Mine was a 1972, and sounds just incredible. Beautiful bell like cleans with tons of headroom. Not really a warm type clean, more glassy with a little bit of ice. The reverb and tremolo sound just incredible.

Silverface amps are a well kept secret that is slowly getting out. Because blackface twins are pretty expensive, early SF models make a great affordable alternative. Because they are turret handwired, they can usually be converted back to Blackface specs pretty easily by a qualified tech. They sound fantastic, and are incredibly well made and durable, not a whole lot to be said against them. Do note that for older amps, you will probably have to switch out tubes and maybe filter caps, so keep that in mind when negotiating price.

Fender Twin Reverb "Silverface" [1968-1982]
5
The Fender Twin Reverb is a tube guitar amplifier. The model I have is a silver face and was made in 1976. There are four 1/4 inputs - two for each channel. The first channel has dials for volume, bass, mid, and treble. The second channel has the same as the first channel, plus settings to control the reverb and the vibrato - reverb, speed, and intensity. There is a foot pedal to turn vibrato and reverb on and off.

The Twin Reverb has a general great tone to it. The parameters are straightforward and it is easy to manipulate the amp to get the sound you are looking for. The inherent great tone makes it very easy to get a good sound. I bought this amp used and never had a manual for it.

The Fender Twin Reverb definitley suits my style of music, as I usually go for a slightly vintage sound when I play rock or pop music. I use this mostly for guitar, but have used it for some keyboards as well. The clean tone on this amp is brilliant and rich in tone. I have a few distortion pedals I use when I want a heavier sound as there isn't much of an overdrive on this amp. If you pull out the master volume knob it gives you a slight overdrive, but sometimes doesn't give enough crunch. The vibrato and reverb effects are some of the best of its kind. The vibrato is pulsating while the reverb is quite authentic. This amp definitley lives up to the name of Fender has made for itself.

I've had my '76 Fender Twin Reverb for about six years. It is my # 1 amp and I use it both in the studio and on the stage. I got a great price on mine used, but even the median price for these used is reasonable. These amps sound great and are built to last. I love my Twin Reverb and it will continue to be my go to guitar amp for as long as it will last!
Did you find this review helpful?yesno
»
Read the 9 user reviews on the Fender Twin Reverb "Silverface" [1968-1982] »