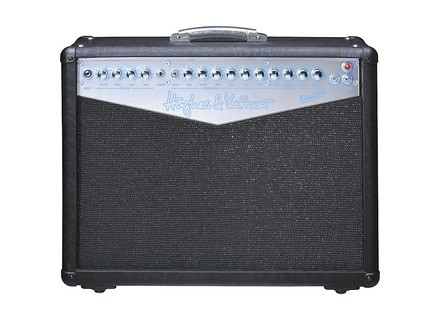 Great flexibility.
The clean channel is a legitimate clean, with a seperate volume level, and seperate three band EQ. The OD channel has a gain and master control, and a seperate three band EQ. There are two master volumes that can be selected by footswitch, giving you two volume levels for clean, and two volume levels for OD. There is a master presence, an effect loop with adjustable level, and reverb. Also, a boost button that is footswitchable. The boost only affects the OD channel and gives it a slightly more raspy crunch.

It has a ton of tones, with heavy crunch and a legitimate clean. The footswitchable dual master levels is a great feature. I wish all amps had it.

The reverb is not footswitchable.
It is very expensive for a 50W, 1x12 combo. The boost button is so subtle you can barely hear the difference. Lastly, the OD is good but doesnt have a wide range of tones and is very modern sounding.


Built like a battelship. This is the best made modern tube amplifier that I have seen in a long time.

A great all around amp. Plenty of power to finally hear yourself over that pounding drummer.

The Duotone is described as Hughes and Kettner as being a very stripped down version of the Triamp. I see where they are coming from, but I don't totally agree. Probably the strongest point of the duotone is its design. Hughes and Kettner are a German company, which means no nonsense, by the book design. Everything is made to be practical. There's a second master switch for solos, which is always a nice touch. Everything else is gravy. There's no junk on this amp that you don't want. It's bulletproof reliability. Manual is great. One thing I like about hughes and Kettner is their effects loops, which are typically very good.

The clean channel is somewhere between Fender and Vox. But really I think the best way to describe it is to say it's a Fender with a lot of headroom. Yeah, it really doesn't break up at all. If you are looking for a more traditional clean channel that has some power amp breakup, you might want to look somewhere else. I personally am not a huge fan of the cleans. I like a bit more hair. But it's still a good clean. No doubt about it.

The lead channel is where it's at. That is the big show here. In terms of gain, think hot rodded jcm800. This will give you 80's rock, 90's rock, and new rock. The voicing however, is not quite your traditional marshall. The duotone sounds like an 800 that has already went through all the studio magic. It's a bit more compressed and nice around the edges. Not as raw sounding, and more refined. This is great for guys who love that mid to high gain british tone, but they want to recreate that polished studio tone in the live environment. But for guys who love the rawness of a marshall, this won't really do that.

I think this amp fits a certain niche of players very well. The old school will probably stick to the rawer sounding amps. But for the new school who wants a more pristine sound, I think this might be the best ticket to the ride. The price is pretty fair. You are getting a high quality tube amp with great parts in it. I really like my duotone. But sometimes if I want a different flavor I will get an 800 or something.

Hughes & Kettner Duotone Combo
4
Some big names have pickup amps from Hughes and Kettner including Alex Lifeson from the band Rush and Tommy Thayer from the band Kiss. Those two gentlemen have their own signature models but they have used been great artist for this company.

This is the amp that is favored by Tommy Thayer. Tommy is best known for his contribution to the band Kiss but he also helped to form the band Black N Blue in the early 80's. This was a hair metal ban that was based out of Portland Oregon. Of course Tommy uses the head and not the combo. The combo is the exact same amp as the head but in a combo version and with 50 watts instead of 100. You get all the same great tone and features as well.

You get the same tone out of the combo a you do the head but the speaker you use will change how it is filtered a little bit. This amp is the little brother to the Triamp from Hughes and Kettner. This is a two channel amp with an extra boost option. You get a solid clean tone for one channel and even a good crunch in this channel. Next you have a distortion channel which has a option to boost for even more sustain and gain.

At new these amps come in right around $2399. Not a bad price for a boutique amp with multiple channels. Many retailers do not carry the amp an more and I believe that HUghes and Kettner will be phasing out this version or model. So the used market is going to the be the only way to go very soon if you want this amp.
Did you find this review helpful?yesno
»

Hughes & Kettner Duotone Combo
4
The Duotone combo is a 2.5 channel, tube-based amp. It runs EL34s in the power section and comes loaded with 2 Celestion Vintage30s. The output is rated at 50w. The combo is open-back so it doesn't have a lot of low-end push although it sounds tight. It can pull it off but it's probably not the best amp for metal.

The 2 channels have separate EQs, great for dialing in your tones without compromise. The OD-channel also has a switchable boost that gives you a gain and light volume boost. In the master section you have an overall reverb and presence control, a FX level control for the parallel loop and the 2 master volumes. The amp comes with a 3-button footswitch that allows you to switch the channels, od boost and 2 masters.

All-in-all, a lot of flexibility in a portable package.

At 1st, I had some problems dialing in the right tones, I was having problems leveling out the treble content between the 2 channels. In the end I was able to get it right with the presence control, running it higher then I usually would, I could dial in the right amount of treble on both channels.

I made full use of all the options, even running a rack fx unit in the loop with great results, the fx level control allowed me to dial in the right amount of FX. The Loop works well and sounds good. I even went as far as using the combo with a midi-controlled rack setup. I requested a schematic from H&K to make a cable to be able to switch the amp with a midi-switcher and got a quick response from the company. Thumbs up for that.

The clean channel was probably the big surprise of this amp. We do not associate eL34-based amps with clean tones but the Duotone has a very big and shimmering clean sound. It also took pedals very well and with a Tubescreamer in front, I could get some great bluesy tones.

The overdrive section, with it's boost, can get you a wide range of tones. I kept the gain relatively low, say AC/DC style crunch and took things to a higher level with pedals, the boost or even both. The amp doesn't have a massive low-end because of the open back but it is tight and sits well in a live mix. Running it thru a closed back cab, I discovered it actually does have plenty of bass so you could run a different cab or get the head version

I would say that the Duotone combo is a great amp. H&K often stays below the rather and does not get the respect it deserves. They have a great range of amps and the Duotone is one of the highlights.

I got this amp in a trade and wasn't expecting much but I was wrong. I gigged with it plenty untill it became victim of one or the other GAS-attack. However, it is one of few amps that I would like to get back.
Did you find this review helpful?yesno
»
Read the 5 user reviews on the Hughes & Kettner Duotone Combo »