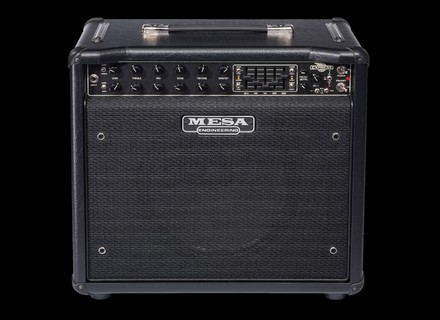 hepathus's review (This content has been automatically translated from French)" FABULOUS!"

it takes a little time to tame the beast, Eq is very sensitive, everything is clear and precise, manual in French (without mistakes!) 37 pages, the sound is very good result with a good guitar .. . comes with a footswitch for channel switching, the reverb, eq and solo mode (a boost) farewell pedals boost ... it also comes with a black fabric cover, class! it has 12 different sounds bases starting with 2 channels splitables (unfortunately not all foot), for example: the clean channel and the clean channel with the eq, then the clean channel with the preset (eq mode dug V) 3're already sounds with a channel, same with the Crunch channel, blues and burn!

we can all play with, country, jazz, blues, a sublime clean sound, rock falls in with the Crunch channel and the metal with the burn channel, nothing to throw, all sounds are perfect, I sold my fender and my vox ... I play stratovolcano, les paul and telecaster ... and I rediscovered my guitars ... if you add pedals put the delay, chorus and other modulations in the loop and the overdrive front Direct. (as true bypass)

30 years of guitars, I had time to try a lot of amp, it is very versatile, powerful, a small mark V in fact, you just take time to find its own settings ... items negative: the weight (! have the back) and the price ... but everything is relative, you can not have a Porsche for the price of a Twingo! damage and that we should make a mod or even for 4 sounds bases foot (clean, crunch, blues and burn) but ultimately 4 different sounds are rarely used in the same song ...

Johnny Crash's review (This content has been automatically translated from French)" Mesa or the world apart ... Giant!!"

Clear and effective configuration knobs you turn to a bit of c .. and the result of changes completely.
The manual (or Pablo hohohoho ... sorry ...) is in English but good treble on the treble and middle on the middle course for bass bass (which are fantastic by the way) are proposed by the combo function Learn reverb and équalo has 5 bands that my so much because it allowed me to sculpted sound I was looking for so long.
Some say that c is the low-end in Mesa but I assure you that this little beast has a very personal and distinctive pattern, this bowl has chest she knows she be naughty hear.

I'm a Roller and I enjoy the group's spring with a much more pronounced than my previous amps definition. And Lespaul std with this little device I can sound like Sir Keith or master Clapton. But anyway I wanted to have on the feet a little extra that I would call "fat and specific fat" in fact it is simple to share brutaltrashpornmégabranlettemétal he does everything else and it provides serious!!

I am just beginning to use but our relationship is already very intense.
I wanted a real mastard has loupiottes beh I have served and I think that he provided me much of SATISFACTION ...
Plus its reverb that goes the loop effect as lamps (sorry I repeat myself) but the Equalizer has been instrumental in the decision of the acquisition of this little wonder.
J would put 15 series if I had the means and the exaggeration typical example of all the good things about my new tit 'bestiolle.
Try so you will see that your review may correspond to mine.
So, play loud, play ROCK N ROLL.
See ya

gibson92's review (This content has been automatically translated from French)" The benchmark in its class .."

I had a 5.25 in HP 10 (frustrating at the distortion ...)
On stage requiring the ... Lack of safe and I had sold to pass on the fender
I was looking for an amp for me to separate myself from one or multi effects pedalboard with 12 pedals ... and play in two groups without any a bazaar (this is done with this amp)
Mesa it's never easy each tone knob is an equa
MESA is also: no breath and the sound we want to do and not copied from other sound (like amps signatures) Ritchie B and Brian M. .. or ....
The sound is good suiteLe manual fro
sounds are four possible TOP ... and we must choose only two ...
As a boost for solo
as an equa

I play everything except the big metal ....
I have a Les Paul custom black Strat B and R Gallagher (two monsters) and a half caisse.avec latter I have not yet found her while with the other 2 runs ca.
That's why the effects the bucket .. for the moment because the guitarist is still unsatisfied ...
I kept an echo line 6 DL4, a huge distortion Way to boost clear, oddly my TS9 not top ...
Here I have found .. perhaps a BB +
the distortion of the burn channel is HUGE with my Les Paul is G.MORE
As against the effects and TS 9 not in the loop as draft ....
clean sounds are the best ... and I get out of a fender rivera ... so

I had a JCM 800 84 .. a twin, a fender rivera, a randall, etc ...
That good amps but each one his ... while there I have 4 .... without the weight and breath and tinnitus
A little early for an opinion because not repeated again
I will post after
a flat anyway because a bed when a channel is going to another when you have different powers
I'll see if it's a bug
if not for me it is a small MARK 5