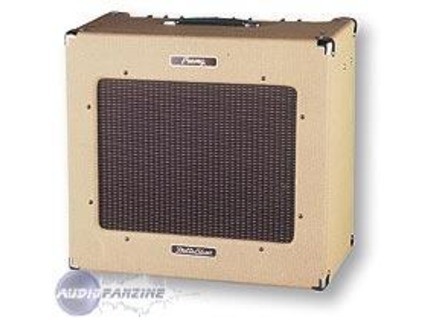 Peavey Delta Blues 115
5
The Delta Blues 115, tweed cover: For the last 10 I've used it for EVERYTHING. Gigs, recording, just playing around, rock, jazz, blues, it's dang near perfect. The guitars I use primarily are an Epiphone Sheridan and Peavey Wolfgang.

The guy at my local music store in MN (I think his name was Pat) suggested it to me. I played it, loved it and bought it for somewhere in the neighborhood of $400. Since then it's gone with me all across the country, south to Missouri and up and down both coasts, I now play it in a rock band in Philly.

Great tone. This seems to be what everyone says, but really that's it's greatest asset. Huge lows, pure highs, and the mid don't get muddy. The clean channel sounds great all the way through, and it has great gain in channel two. Tremolo and reverb both sound good, and if you need to give it more for some reason, it sounds great with a pedal in front. Oh yeah, and the dials don't go to 11, they go to 12!

My only issues are 1) it doesn't come with a footswitch, but almost no amps do, and that's a cheap purchase, and 2) the tubes are kind of fragile, though with all the traveling it's done I've only had to replace tubes a couple times, and you can by a tube guard.

Like a rock. My buddy was helping load me into a gig and dropped it 5 feet out of his van. I wouldn't recommend this as part of it's usual maintenance, but it suffered only a couple scratches to the tweed, and played as good as new that night.

Buy it, use it, love it. It'll be with you forever.

Peavey Delta Blues 115
5
I found this little guy at a local pawnshop and knew it was for me. I only paid $350, which isn't a bad price considering it is all tube. Plus, I needed a new amp and I had never owned anything but Marshall.

I love the clean channel. It is so pure but with the slight hint of dirt. Lots of headroom, this is so different than my Marshall. I couldn't get a clean sound out of that thing. Tubes make all the difference.

I play a semi hollow body guitar, which really sounds great out of this amp. The amp has some real depth in its low end.


Basically the reverb is not the type I like. I think that it comes with a spring reverb and not a hall, so you get this bouncy sound instead of a long-drawn-out reverb.

The tremolo is not the best sounding one but it is not the worst either.

The dirty channel is a little muddy. So, I don't use the overdrive. Instead, I use a tube screamer, which sounds great on the clean channel.


This amp seems to be well put together. My only complaint construction wise; is the lack of a tube guard. Other than that it seems to be solid.

I thought about buying a fender and other amps but for the $$ this is the best choice. You can't beat it. Hands down this is a bargain amp no matter what you think. The sound is amazing and with the right overdrive pedal you can have some killer tone.

Peavey Delta Blues 115
5
I got this little piece of heaven from a local music store in Sumter S.C. I gotta a hell of a deal too! I only paid 350 bucks, and the thing was brand new. I just had a tiny tear in the tweed. Big fu*king deal right? The reason I bought this amp was simply the SOUND!!!!!!!! There is only one word to describe it HEAVEN!

One 15" speaker, makes for deep bottom end, but not too bassy. It has Reverb, and Tremolo with speed and depth setting. No stand-by switch, but that isn't really needed on lower wattage amps.
I have owned marshall 50 watts, and this little 30w blows them out of the water with tone, volume and clarity. The clean channel is crisp and clear, like glass. The overdrive channel is real bluesy and also great for southern and classic rock. Three 12AX7's in the pre-amp, and four EL-84's in the power section. I hear people all the time say that solid state amps are just as good as tube amps, and that there is no difference in the tone or sound. Well, i've played all types of solid states, and the first three tube amps I ever played, hooked me! I don't give a shit what people say, MY EARS TELL ME THAT TUBES ARE BETTER!! And this little tube amp can be had for a reasonable price. I think it normally runs about 400 to 450, however if you shop around, you can find it cheaper. I can't describe in words the beautiful sound of this amp.
It also has PLENTY of head room. More then enough for even medium sized gigs. Besides, most of the time; me anyway, your amp will have a mic on it.


It has a solid state effects loop and rectifier, but even that's not a big deal. It is still all tube unless you use the tremolo and reverb.
The one I have didn't come with a tube guard, but that's only 20 bucks on ebay.

SOLID AS A ROCK!!! PERIOD. Nothing else to say.

The bottom line is this. THIS AMP IS SERIOUSLY UNDER PRICED! I used to be a Marshall fan, but every Marshall I ever owned just gave me mechanical and electrical problems. I AM NOW A DIE HARD PEAVEY FAN!!! Thank you Mr. Peavey. Keep em' commin'! I plan to buy the classic 50 next.

This is a great product. Even if you play heavy metal, just throw a pedal in front of it and there you go! I definately reccomend this amp!!!

I liked the sound, price, and great value.
This amp was richer and more robust in sound compared to these other amps. It made the Peavy's with 12's sound weak. This is a good all round blues, jazz, country amp. It had a special made Peavy Sheffield 15 inch speaker with reverb. It also had a gain control and smooth well sounding breakup or beautiful clean's depending on how you set the controls. I really loved the Tweed look on it also. I do beleave it came in black. If one really looks around it can be purchased for $350 which is a fabulous price for the sound you get. I also is a full tube amp.I purchased a fender stereo chorus that was a good price for a used amp. While I love the chorus sound I miss the deep, vibrant tones of the Peavy Delta Blues.


I purchased a fender stereo chorus that was a good price for a used amp. While I love the chorus sound I miss the deep, vibrant tones of the Peavy Delta Blues. If there is anything I don't like about it is that being a tube amp you have to let it warm up and take more precautions than with a Solid State like I own. And the fact I do not own one. I now have to get some better speakers to even get close to the sound of this little amp.

Construction appeared very good. The sound was awsome. It is rich, vibrant, very clean or smooth breakup depending on the settings. i.e. gain control.
Reverb is good.

I would fully recommend this amp for anyone playing jazz, blues, or country. It is small enough to carry and a good value at $350 ( you will have to search around) I found one at this price at a nice little music shop in Weatherford Texas just west of Ft. Worth. I am in no way affiliated with Peavy or this music shop.This is a very honest objective opinion.
Gary

This review was originally published on http://www.musicgearreview.com
Did you find this review helpful?yesno
»
Read the 19 user reviews on the Peavey Delta Blues 115 »