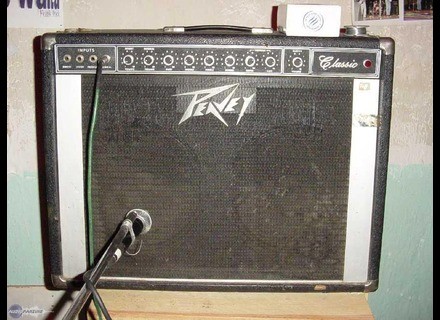 Peavey Classic 212 Combo
4
Peavey is one of those companies that have really been a huge part of the modern rock world. They have build an integrated part of the new sound of rock music in that last 20 years. They specialize in high gain inexpensive amps for the basic consumer to be able to afford. They have been able to some how keep their prices low and build great amplifiers.

This is the Vt series amp that was first introduced in the late 70's I believe. This used what was called hybrid technology. They would use a transistor preamp stage rather than having preamp tubes as you would see in most amps. The they would have power tubes in the power section. Which allowed them to lower costs but also build amps that would sound almost as close to a all tube amp.

This is basic EQ setup with these amps. There really isn't anything different then most other amps or even other Peavey amp. Like all Peavey's their amps are extremely easy to figure out. The only thing that I don't like is all the inputs in the front of the amp. There are four inputs and it get kind of messy in the front of the amp. You can have this amp up in running in no time. These are like most Peavey's a plug in and play amp. That means that you really don't need an instruction manual to figure out how to dial in a decent tone out of this thing.

The tone of these amps are pretty decent. They certainly are brighter to y ears than a 5150 or a Rockmaster preamp. I find that the distortion is a little bit thinner in tone and robust. Not that, that is a bad thing but just a different taste or voicing within the amp. There just isn't that hug juicy kind of gain that I am so familiar with when it comes to Peavey amps. I like all Peavey amps with a good Gibson Les Paul or another guitar that has a humbucker installed. I find that the frequencies that make Peavey who they are comes out better when playing a guitar with a humbucker installed. I suggest letting this thing cool down for a while after playing since it will explode otherwise. These amps were notorious for over heating and to why they installed cooling fans in the later models.

These amps have long been discontinued and the used market is the only way to go. I have recently seen these amp for around $300+. That is a steady value for an amp this old and with this technology. So these amps hold a decent value to them and you will get pretty much your money back if you buy and do not like it. I would recommend picking one of these up if you can find it somewhere under $200 you need to jump on it. This is a nice jamming or practicing amp.

Mannnu's review (This content has been automatically translated from French)

Very easy to use. ... You turn the knobs Tres gand choice of

If I fell in love with this amp is a cause sonnorit.Le its sound is very hot in the clear as disto.C is when pushed hard enough he makes clear his mieux.En the treble is quite prcis held that the bass is round and easily obtained chaleureuses.On blues.Si jazz tones you push the preamp you can get a natural saturation is more or less fat I am ... is used extensively in clean or with a slight saturation for small "crunch" or so with my overdrive pedal lamp has a big enough rock distortion ... In any case it sounds very rich and a speck particullier is l. ..

I use this amp for 5 years and I think I will keep as long as its possible.Son has nothing to do with Classics recents.Ce I like most is his originalitson grain, its warmth and versatility of a very clear sound ultra fat through all the beaches intermdiaires ...

KyssBlitz's review (This content has been automatically translated from French)

Trs simple, each button is clearly named according to its usefulness.
This gives good sound not easily, readily obtained from trs good sound!

I think he can do anything you ask, with its great lights, and with his pitit transo.
I play with a Start, and boss pedals ood-2, ds-2, and 5-dunlop cry baby 95 ..
every amp I've tried (including Marshall and line6) struck me as bland trs a cot of this old and honorable monster.
The distortion is fat in the trs ... bright and treble are slammin trs.
Personally I dtest slamming the treble too, so if I use bright, it's only the rhythm, because of the bright low cot is really powerful for the other hard rock and heavy metal.

I use it for 2 years and I have no regrets. A remake? plutt twice that!