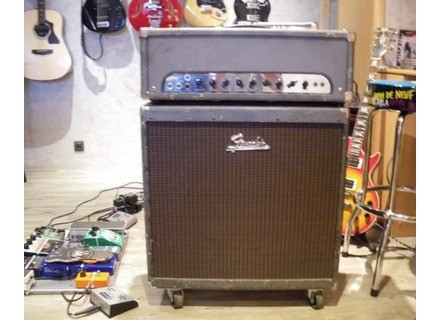 Peavey Classic 50 115 (Discontinued)
3
This is a 50 watt two channel amp that is geared towards the old school rock and country tones. This is generally a clean amp with a mild overdrive for channel one. For channel two you get a little bit more gain on tap but the voicing has is limited to the sweat classic rock tones. Not really a high gain amp even though it does have some good distortion on channel two. This is going to be an amp that you couple with pedals and effects to compliment your playing style.

This is basically the same amp as the 30 watt version only in a higher wattage. All the same features and tone are there. However, you will get a tighter low end from the speaker since in this amp they are using a 15 inch speaker instead of a 12 inch. So the low end will be better suited for Fender Strat players.

You will get the same tone as the other version of this amp but the respoonse from the speaker will be slightly different. the tone will have more of a low end focus since the speaker is a 15 inch instead of the 12 standard speakers.The tone from this amp is not really my cup of tea. The is geared toward the classic rock player who needs a good Fender tweed style amp, but wants more versatility. The amp is versatile for that kid of player. Having the boost switch is stretching in terms of classic Fender style EQing. Also having another channel is going to be a bit much for some old guys who this amp is marketed towards. However, if you need that versatility and the price is an issue then this would be a good amp.

The clean tone is a pretty decent clean tone. You can crank the volume up more and it will get a mild overdrive tone. When you engage channel two there you will get some good distortion much like a tubescreamer would get in front of an already overdriven Fender classic amp.

I would recommend this amp to anyone who needs a good two channel tweed amp and doesn't want to spend too much to get it. This is a good amp that will give you solid creamy rich classic rock tones all day long. For me this isn't my favorite amp from Peavey, but it is a decent amp. You will get a very usable clean tone and a solid distortion tone fit for classic rock, country, and pop music.