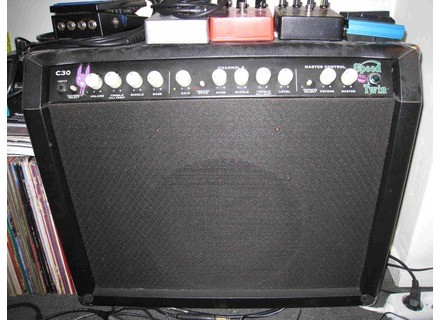 The EQ is active (ie if its not for all is zero), when there is sound ... ouch!
Indeed, there is a Marshall-y sound (see Gildesuez opinion), especially on the bass side, that I find really&nbsp; Marshall vintage typed : the famous boom, boom on the edge of the explosion of HP you love or hate!
I would say that although low saturated soiled, are relatively "clear" but very present, the medium brings the rage of saturation when the treble end and dosage sculpt the sound (a little way control "presence") .
Where I am amazed is that I found reminiscent of the Hendrix sound.
This amp is really surprising and certainly deserved more attention to its release it has never had.
Collector?

As described above, this amp, bristling with valves, delivers vintage sounds to perfection, but with a level of gain available, however impressive, making it probably a bit more modern in spirit.
A good surprise.

Purchased under a "stocking" store, this amp that I didn't see in the first place, however, aroused my curiosity.
After a pretty conclusive test, I bought it and I continued to explore it at home (maybe even more surprises to come ...).
FYI, the same store was also stocking a Mesa Boogie 5-25 (Celestion 12 ") that I had seen in the first place and have not bought after testing ...
Last info for who cares, I have a total of 6 all tubes amps.

See the feature of Speed ​​Twin C50 ... it's almost the same!
HP 15 "Celestion, big bass, clear sound and sharp grain distortion Marshall
Developed by Trace Elliot with the ingestion of at Marshall in order to have the combo Fender / Marshall...the best of both world!

9.99 / 10 because of a microphone mute when changing channel ... insignificant in the long run for the qualities of this machine!
The combo Fender / Marshall for bars, clubs and concert halls of all kinds!
Size / weight / volume / sound perfect!
Terrible distortion of the boost for the lead (as a third channel!)
The terrible Pull Bright on each channel
THE spring reverb ...
Marshall Footswitch 2 channels.
All styles, all your favorite settings in 10 seconds with 3 channels to toe!

ALL you can without breaking your back!
The distortion with a definition and a truly amazing grain and crisp audio and sharp lens.
Whatever your guitar, you the branches and you let go this amp ...

Bought new in 2002 or 2003 at Pigalle (The tube amp)
The only amp that I tried had a distortion that was not "bleed" the roots guitars and agreements without complicated settings and dissonant ...!
A perfect definition!
The clear sound for '60s funk and rock, all the distortion you want and power without break your back ... RARE!