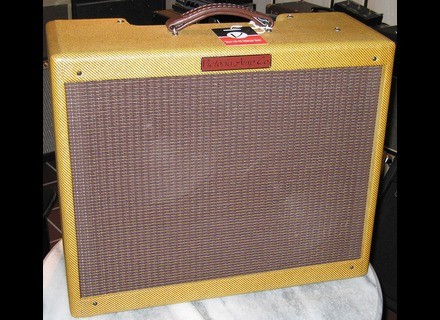 Victoria Amplifier Double Deluxe
5
The Victoria Amplifier Double Deluxe is a guitar combination amplifier from a little known company that makes top tier amps. When I first saw this amp I thought it was a Fender tweed amp or something, but upon closer look I noticed the 'Victoria' emblem. This amp was brought in by a client, so I didn't have too much time to be aware of the characteristics at the time, but the amp does have two sets of 1/4" inputs for either a bright or norm channel. It is actually two amps in one, hence the name 'Double Deluxe,' and depending on if you're using one or two of them, the amp can deliver either 30 or 40 watts of power and also has 12 inch Jensen speakers. We were using the normal channel and I haven't heard what the difference would be between the bright and norm channel. The amp has seven tubes in total, with four 6V6 tubes, along with a 12AX7, a 12AY7, and a 5AR4, which is really a fine collection of tubes.

There isn't all that much that you need to know in terms of background information on using the Victoria Amplifier Double Deluxe. It only has a few knobs, two of which are for volume for each of the two parallel amps. It also has a general tone knob for both of the channels. That's all there is to the amp, so while perhaps useful to have so you can quickly glance at the specs, a manual isn't necessary.

The Victoria Amplifier Double Deluxe is definitely one of the best sounding amps that I've heard in recent memory. It's got a certain fullness to it that just sounds alive. The tubes give it a thick sound that is capable of a good amount of crunch as you get louder. The two amps together here really give it a great blend and make it an absolutely stellar tube amplifier. It will excel in just about any situation where you would want to use a tube amplifier, which for me is always when I'm recording guitars. This was pretty much the go to amp for the whole session, so we used a variety of effects and guitars, but we stuck mostly with this amp cause it really sounds that good...

Victoria Amplifier's Double Deluxe guitar amp is up there with some of the best that I've used. That said, it's going to cost you a pretty penny if you can afford it, so I'd probably only recommend this to a professional unless you're pretty serious and have a few thousand dollars to spend on an amp. This is pretty much the all around perfect tube amp.
Did you find this review helpful?yesno
»