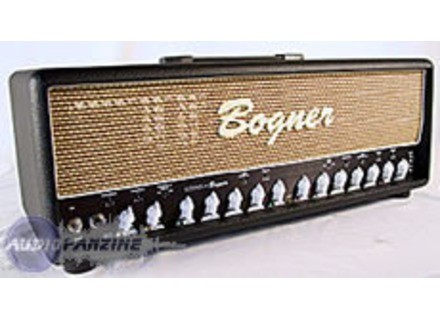 • Individual line-out controls for each channel (standard one common control)

• Metal Grill (not available on 20thA)

Bogner Ecstasy XTC 101B Head
5
The Bogner Ecstasy 101b is a brilliant 3 channels of just about every tone you could need. 100 watts of el34 bliss, the 101b has more features than many other amps on the market. The front panel is adorned with two separate excursion controls, a second assignable presence control, an assignable boost and pre-eq selection for each channel, and switches to change the gain structure and to engage the legendary plexi mode. Around back the amp has both half power and an OLD/NEW switch to further refine the playability and dynamic feel of the amp. The amp also has an effects loop and footswitch.

The Bogner Ecstasy sounds fantastic at bedroom and gigging volumes. The build quality is extraordinary and the amp is beautiful to look at. The amount of options that Bogner have provided to shape your tone is unparalleled. You really have the best of all worlds with so many channel independent functions.

The green (clean) channel is very easy to dial in and possesses a fullness that sounds finished like a recorded guitar track from a good record. It's not the most gorgeous clean channel you'll play but it feels nimble and appropriately so for a channel switcher in this price point. The blue channel is simply breathtaking. Any sound from jangly vox-esque rock to modded marshall snarl the plentiful tone shaping controls allow for some wild distinct tones to be had. The plexi mode in this channel handles liquid lead passages with sheer finesse. The red channel be ran relatively docile or wound up to near fuzz like tonalities. I found the red channel with medium high gain to have an exceptionally Hi Fi sound to it. Very finished. Very expensive sounding.

The Bogner Ecstasy 101b is a world class channel switcher with scarce competition in the market. It is considered one of the finest amps manufactured in the world and with great reasoning. I tested a Bogner Goldfinger that I could dial in comparable tones with. If you only need two channels, the GF 45 does a wonderful impression of the 101b's blue channel. However, for the sheer amount of features and the availability of 3 impressive channels, the 101b is absolutely worth its $3000+ price point. The 101b can be found for between $2100-2400 commonly on the used market. Great Investment.
Did you find this review helpful?yesno
»

Here you have anything but your basic three channel amp. You have a three channel amp with a bunch of switches and convoluted layout. Tweaking this amp is a nightmare. I used to fight with this amp all the time throughout band practice. I could never get the right sound out of it. All of the switches proved useless. I even had the Class A/AB switch option, which was pretty useless as well. Just thinking about eq-ing this amp gives me an instant headache. I did like the mute on the footswitch, though. And the blue LED is a really nice color. The switching was fast and accurate.

How it sounds depends on what channel you are on. The clean channel is really bad. Just awful. The notes don't bloom or sustain, they just clunk flatly on the neck. The clean sound was the worst part of this amp. The second, mid gain, channel sounded the best. It sounded like the best JCM800 you've ever heard. Some people have claimed that this channel is worth the price alone. I understand what they are saying, but not for me. The third, high gain, channel is a little odd. It is darker than the blue mid gain channel. So much so that it almost seems like you have cotton in your ears. Trying to tweak this channel was a frustrating task. You could hear that there was a good amp in there somewhere, but I could never coax it out.

This was my dream amp. I mean that. I had literally dreamed about this amp and how awesome it was going to be. Then I got it and was so disappointed. Like I said, the blue channel was fantastic, but the clean channel was bad and red channel was mediocre. It was not what I had been dreaming of. I tried to make the amp work. I wanted so hard to love it. No matter how hard I tried to embrace the amp, it kept pushing me away.

I honestly believe that if they did away with all the switches, it would probably make the amp sound better. I think that was part of the over all congestion of the clean and red channels.

One other problem I had with the amp is that my amp had the metal grill option. While in use, the hard plastic Bogner logo actually vibrated causing a loud audible buzzing sound. That was a little annoying.

If this is your dream amp like it was mine, I would suggest you try to play one since. I've played a few other since then and I still have a similar opinion of the amp. I wouldn't want you to have the same disappointment I had.
Did you find this review helpful?yesno
»

Bogner Ecstasy XTC 101B Head
5
Bogner amplifier's is one of my absolute favorite amplifier manufacturers. They've built some of the best sounding most high-quality amplifiers in the industry. Their flagship amplifier has to be the ecstasy 101b amplifier. It is extremely versatile amplifier because of its clean, overdrive, and high gain channels. This amplifier has a load of versatility within in each of the three channels.


I love this amplifier pretty much on every channel. The clean channel is pretty good but not fender like. It does lack a little bit in its brilliance and clarity. The blue channel is where things start to get cooking. It has a nice medium to high gain tone that is good for classic rock playing and early Van Halen type tones. This is also the channel that you would probably want to stay on if you do a lot of cover songs in a band setting. The third channel which is the red channel and high gain channel which comes to be more compressed and saturated sounding. It has a lot more gain than the other two channels and has a good old punchy thick tone. It's a great tone for modern music and has a great fell and warmth to it.


I highly recommend this amplifier to anyone who has the money to buy it. It's an exceptional amplifier if you can afford the big ticket price of $3400. That is a pretty expensive price for most people but this is a professionals guitar amplifier. So if you have the means I highly recommend picking this up because it has such a great feeling and great tone. The tone of this amplifier is leaning more towards the Marshall style or British style of amplifiers. So keep that in mind when looking at this amplifier.

Bogner Ecstasy XTC 101B Head
4
The Bogner Ecstasy 101B is an all tube 120W head packed with features. The 101 came as two versions the "A" and the "B". The latest being equipped with EL34 output power tubes.

3 Channel head, although channels 2 and 3 share the same EQ knobs, with the difference that the switches such as "Excursion", "Brightness", are independent for all of them. This makes the tonal possibilities of the amp almost endless.

Included is the 7 function footswitch, which controls the boosts for all channels and the On/Off switch for the Loop.

The Ecstasy 101B has other tone shaping options such as "Half power", "Class A/AB", "New/Old" on the back panel, as well as the send and return jacks for the effects loop.

Last but not least channel 2 or 3 can be assigned "Plexi mode" basically a plexiglass Marshall amp lives inside this amplifier.

The Bogner Ecstasy is so packed with features, knobs and switches it can be quite confusing and overwhelming at first. It is not an easy amplifier to set up, but the tonal reward when done so is well worth it.
It is not a beginner amp by any means, the manual available on the Bogner website is clear and helpful although there are tons of tricks on setting this beast up.

The build quality is up there with all the boutique makers, and I have not dealt with customer support from Bogner.

First Channel (Green Channel): Can go from pristine cleans when set up correctly to classic rock when used with the boost. The clean channel's circuit is based off a vintage Fender, and the tip to getting a good sound is:

- Volume on 10, and use the Gain knob to control the output volume.
- Mids on 4 with treble and bass knobs adjusted to taste.
- Brightness switch on B1

There is no other way around it, but once done correctly the amp sounds gorgeous.

Second Channel (Blue Channel): This is the Bogner trademark sound right here, unique signature sound worth the price of admission. This channel can do it all. Needs to be heard to be believed. Boosted it can nail the 80's hard rock tones. If you need more gain...

Third Channel (Red Channel): More compressed and liquid than the Blue Channel, very good soloing channel but lacks a bit of low end tightness when needed. Seems less voiced for rhythm and more for leads. Lots of sustain and harmonics of course.

Plexi Mode: A nice addition to an already great amplifier, the Plexi mode behaves just like an old Marshall Plexiglass, it needs to be turned up loud to achieve greatness. Anyone who has played a vintage Marshall knows what I mean.

Cons: The Red channel could be improved (In fact it was in the 20th Anniversary Ecstasy) to sound tighter and have more low end, for those Metal moments.

Overall this amplifier will do everything well, from Fender, to Marshall... while adding that addictive Bogner voicing that is so unique and special!

I would buy it again if the 20th version were not available. If you have the cash I suggest checking that one out first, as it carries the best features of this amp and then some...

Did you find this review helpful?yesno
»
Read the 7 user reviews on the Bogner Ecstasy XTC 101B Head »