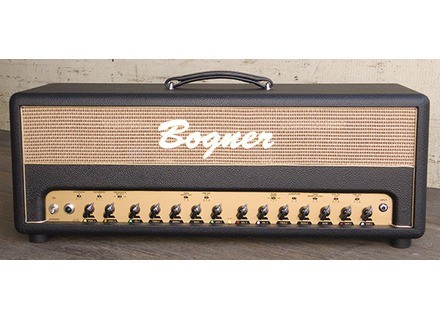 Bogner Ecstasy 20TH Anniversary
5
This is a 100W tube head, driven by a quartet of matched EL34's, which differs from the original stock 20thA model as that one is 6L6 based.

The amp offers your standard input for the instrument, but from there, offers an amazingly complex and numerous myriad of tonal shaping and signal processing options. The amp can be run at 1/2 power, the amp can change its internal circuitry to afford Class A or Class AB operations. The head also has several modifications to the circuit routing to allow for vintage voicings to modern. Furthermore, the bass response can be altered via excursion switching, and each channel can have a boost added to it.

Overall, the complexity and sheer number of options with this amp are unrivaled in any other single amp head I know of. The entire spectrum of sounds and tones created are 100% completely useable and highly attractive to discerning tone seekers.

It goes so far beyond suiting my needs that if I could only have ONE amp, this would be it.

The entire spectrum is highly attractive and useable, the clean is a tad bit darker with this EL34 model than the 6L6 model - however, with a pending installation of Gold Lion EL34's, I believe this darker tones in the clean circuit will be slightly enhanced to offer more clarity and shimmer.

I can get this amp to do percussive, loud cleans, through to break-up blues, through to the ever-sought-after "plexi" style tones, right up to heavily aggressive high-gain tones.

My fave area to play in is the Blue Channel (Crunch/Dirt/Plexi) and the Red Channel (high gain). Amazing amount of terrain to work with in both of these channels.

As some of you may or may not know, after a lengthy wait of about 2.5 months after I placed my original order in, the rig finally arrived late last week and I was stoked to see it arrive safely. As promised, here are some thoughts on this amp and cabinet as a fairly up to date review of things I've come to realize and have experienced with this amp. Please note, I understand "honeymoon phases" but have had enough amps come and go through my hands that this rarely seems to be the case anymore. Sure, it's a novelty, but all in all I am fairly objective when it comes to all things gear related. I know what I like, what I'm looking for, and whether or not the gear delivers it... So here we go.

I'll start with the only problem I've experienced thus far:
Upon unpacking the unit and the footswitch, the footswitch cable end that goes into the back of the amp seemed testy. Loose connections, poor connections within the plug end, not sure. I thought it might be because the cord was wrapped so tightly during packing - and that it would remedy itself once it loosened up - wishful thinking on my part. In the meantime, I contacted Charley and he was super friendly, accomodating and helpful. Nevertheless, even though the invite to pack it up and have a new one sent out immediately was offered, it didn't need to happen. Whatever was the issue seemingly worked itself out. Wishful thinking paid off - everything is working primo as it stands right now. Problem, if there was one, is solved.

Aesthetics:
The amp head is daunting to say the least. A lot of micro switches with coded descriptions line the front of the plexi-like faceplate. Furthermore, the knobs are all over the place, and when ya think there ought to be one, there's two, and where there should be two or more, there's one. But after a few hours - it all makes total sense. The tolex is tight - head, cabinet, corners, bottom, everywhere. And the piping is perfectly cut and adhered. No issues whatsoever with this cosmetics of this amp. I had to remove the backplate to access the glass upon its arrival - I always re-seat my every tube after delivery... This backplate was so solidly packed into the rear of the head, screws were almost redundant. Tight fit - perfect fit. Inside the head, spotless, neat and tidy. And ya, the glass needed to be pushed in to re-align each tube and respective socket. Back to the front panel - each knob has perfect, stiff resistance; and the LEDs are all extremely bright and clear. The rear panel is loaded with options - well laid out and easy to understand. Mine has the A/AB switch as well. Overall, the head is about 29.75" in length (width?? whatever...you know what I'm talking about). it looks super vintagey, wide and low. Very elaborate looking amp head. As far as boutique amp rigs go, this thing looks the part and definitely has the details to prove it.

Playability:
I was going to break this down into each channel, all three. And then there's the Bright Switches, the Modern/Vintage, the PreEQ, and everything else. Suffice it to say, too much to type. What I will say is the stuff that really stuck out in my mind and to my ears. Channel one is awesome in its clarity and percussiveness. It's not as chimey as one might expect, but then again, I got the EL34 model, not the 6L6 model. It is, however, bell like, and in the higher volume levels - definitely swirling and rich. It's a sound you'd hear some of the classic clean channel players going apeshit on - think anywhere along the lines of Steve Hackett to Clapton to, yes, even that country clarity that albeit I loathe country music, it's got the qualities to be that clear and biting. Perfect channel, and not one I'd relegate to only punching pedals through - it's too nice as is. Channel two is exactly as I had hoped for - perfect crunch and yes, albeit I didn't buy this amp to get 'plexi' sounds, it does 'em perfectly when EQ'd to do so. It's got a quick decay in the lower to mid volumes, but really hammers in the higher volumes. For studio or bedroom levels, add a nice neutral DD and Channel 2 is a star. Channel 3, classic beautiful rich gain territory. All things one would expect from this pretty expensive and sought after rig - the green, blue and red channels deliver a near infinite amount of tones - all of which are above average if not amazing. So onto the things that really stuck out:
- the footswitch has a standby button. Smart thinking, I can swap out guitars without that pain-in-the-ass noise.
- the newly afforded BOOST switch for the channels is something that really needs discussion. I don't know what normal BOOSTS do, but I typically don't like 'em. They sound as though someone added noise, harshness and stupid mids to the signal. Not the 20thA XTC. The boost is rich and when breaking into solo territory on ANY channel, it's a real welcome option to hit. It's just perfect - and there's no other way to describe it - this is a BOOST I will certainly use a lot. It sounds awesome...!!
- the functionality of the switches, obtuse at first glance, all make perfect sense and ease of use when actually playing. Ya might think they were cutting corners or doing things 'weird' in the Bogner sweatshop when reading the manual or looking at the 'you can add this but it subtracts that' style of layout and use, but it really makes sense. The stuff that can be added is definitely worthy of adding, the stuff that gets cut out or neutralized when the aforementioned stuff is added, is, rightly so, useless. So this to me represented a lot of hours or thought and years of refinement. It just simply kicks ass.
- the microswitches all make a huge difference but not in the sense of some 'huge differences' in other amps that go from 'usable' to 'useless' when using the entire spectrum of 'switches'. Not in the case of the 20thA XTC - they all make a sonic and tonal change that's audible, and these changes all sound very, very good and usable. I hope you're following me here.
- Modern/Vintage, no lies. It is exactly as it states, your ears won't believe it.
- Excursion. Here's one I thought was a dollup of useless bullshit... Wrong. How the hell these buggers figured out how to allow more bass response and physical release and sag of the cones is beyond me. But it works. One can go from that tight Ska like punch to the wall shuddering thunder of rock in the flick of a switch or two.
- the 4x12 loaded with V30's. To think that prior to getting this amp, I was leery of a cab filled with those noisy, mid peaky, brash V30's that I actually was considering loading it with either Golds or a mix of something more smooth. I was told to try it before I changed anything... Well, hats off YET AGAIN to Bogner to not just pouring bullshit into the direction of the general populous - they really DID match the head to the sound of V30's. They're not broken in yet, but they sound better in this set up than any of the cab and head combos I've had it the past - ALL OF THEM!! So whatever they did do, they did so with the V30's in mind because they sound smooth, syrupy, warm and hard all at the same time - and NOT noisy and abrasive. Well f*ckin' done guys!!
- In summary, the thing that sticks out in my head the most is that it's really REALLY hard to make things sound bad with this amp. I've got and had a lot of amps, and usually, at the nether reaching ends of their sonic spectrums and capabilities, they're a bit dodgy. In the case of this amp, it's 100% usable from the lightest and softest and cleanest of side A, all the way over to the bass-cranked-mid-strong-hi-gain side of B. It does it all, perfectly.

I was told by a few of my friends around the globe that their particular tonequest stopped with the 20thA XTC. Some had 101B's and they said they preferred the 20thA. I never listened. I thought ya ya, whatever - it can't be THAT good. Well, bastards were right...I may have egg in my face for not believing them, but I don't care, I've got one of the best sounding amps in the world right now about 12 feet from me as I type this email on my DAW Mac. And now? It's time to play some more...