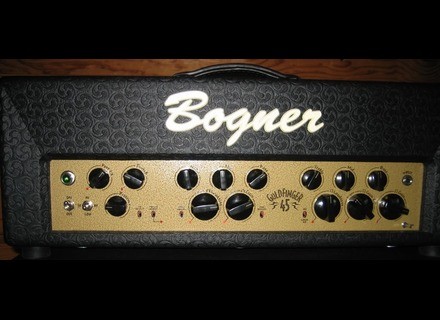 bapman76's review (This content has been automatically translated from French)" Excellent!"

Switch Power + Half High and Low power for 4 different power levels between 9 and 45 watts.

- Setup a little more complicated than a simple amp, given the number of options available.
- Manuel clear but not easy for a non-English speaking.
- As it sounds against whatever you do! (Except volume to zero! Hihi)

Let's go back in the thick of it!
Already, one branch, it sounds ... without touching anything then we like it or not, it's matter of taste.
Personally, I am still amazed by the Clean. It's really what I wanted to have when changing gear and then I'm not disappointed.
The range is huge, warm sound of a slamming his property, there is everything you want (or else be very difficult).
I stayed three shot over before you even switch on the 2nd channel!
In addition to traditional gain, 3 band eq and volume, we have two switches Bright, one before and just after preamp. The two pledged, it slap a lot, a little too well. The most dominant post is placed, the other is more subtle.
In any case, there way to find what you love without any problems.
The second channel now. Two modes: "69" or "80", the first typed plexi vintage and second approaching the JCM800.
Having never really tested real plexi or JCM800, I am forced to believe Mr BOGNER ... but hey who cares as long as it sounds!
Indeed, with the mode "69" is a sound with gain "moderate" (we agree on the moderate is not a fender crunch either !!!). Very rich, perfect with a Les Paul or something. Personally, I love Duesenberg Starplayer Wink.
Agreements for the top of the handle in rhythm, it fulfills the sound space without being searched. With Luke and microphones a little smoother this is the least we tend to lose low I think (but hey I still have to explore the beast).
For cons, I tested with an MXR MC401 Boost input and climbing fast in sounds good leads provided, I love it!!
For mode "80" is more modern. we're going the right crunch to saturated sending without problem, I found most of its type that I had with the X88R without going to big lead but much more airy, more defined I think.
I love the two but unfortunately, it's two modes are not controllable at the foot. Besides the "Poc" that occurs by switching from one to another, it would be unmanageable.
In short my heart between the two scales, with a slight preference for the still "69" (we re not! Laughing). To see ...

The functions of loops Pre and Post are friendly. Without plugging in, they act as boost, choose series or parallel for the second.
Everything you need, and accessible to the footswitch!!
The reverb is great, frankly, we want to leave it the way all the time!

For me that was just a Rack config, I find this amp responds really well.
It was a really different feeling.
The nuances emerge, the guitars more clearly express their character.
A short head tried without moderation.
Against very typical for vintage, if you want a modern sound with big metal saturation to go your way.

18 of 18 people found this review helpful