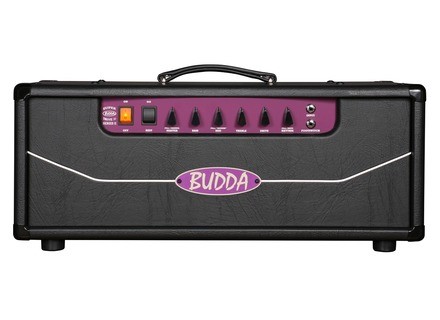 Budda Superdrive 30 Series II Head
4
The Budda superdrive 30 is a fantastic el84 rock amp that covers a lot of sonic real estate while maintaining a sense of simplicity with it's no-nonsense front panel. The amp features two channels that share a single EQ. The amp keeps the front clean by incorporating push/pull functionality to trigger channel selection, a mid scoop, and a bright switch. The amp sports and effects loop but no onboard reverb. The black Tolex grill and purple faceplate pair well and give the amp a very distinct look that is instantly identifiable. Very enjoyable amp to looks at as well play.

The simple control layout is a breath of relief from other feature packed amplifiers. The tradeoff typically with an amp like this is the compromise of versatility in exchange for easy to dial in sounds. The retention of dynamic feel makes the trade more comfortable with the SD30, responding excellently to pick attack and your guitar's volume control. The amp is very loud and keeps it's clarity at higher volumes as well.

I played through the Budda SD30 with a Gibson SG standard. Mesa 4x12. No effects.

The cleans of the SD30 are very articulate and the bright switch makes the amp have more chime with darker sounding Gibson guitars. I thoroughly enjoyed the natural breakup of the amp when pushing the master volume. Very vintage and cool. The high gain sounds on this amp are not particularly impressive but are fairly enjoyable when the amp is at higher volumes. I feel the amp could benefit from a boost. The voice of the SD30 reminds me of the Mesa Boogie Electradyne, but not nearly as dark as that amp.

The Budda Superdrive 30 is a great, simple amp. An amp that feels like an homage to the classic el84 designs of the past. The versatility of the amp never feels fully compromised but you may be disappointed in the amp if you play more aggressive styles of music. The Budda is priced fairly, but with the sheer amount of Soldano Avengers and Hot Rods on the used market--you might find better value elsewhere.
Did you find this review helpful?yesno
»

Budda Superdrive 30 Series II Head
5
This is all a head lamp equipped with lamps EL84 power tubes groove and electro harmonix 12AX7 preamp different type. Also note the presence of a 5U4 rectifier tube.
Two channels sharing the same setting section, an effects loop, a slave out of his knob level and the other stuff that is standard on all heads. Footswitch included.

The head gives an impression of standard finish. The look is a little surprising, vinyl is very soft, high-quality electronics assembly quality is. The choice of lamp surprises but will watch from his latest rationale for this procedure.

Note that Buddha has a real team of marketing genius that require all their heads SuperDrive, so one could think they sound like. But no. The SuperDrive 30 is typed rather rock while the 45 is basically metal. The 80 has a different grain, gain and development. Like what ...

(8) it breaks no bar chair is just right. But the price is a killer for the gear of this caliber!

The head wants to set up and intuitive to fathom. But it&#39;s just not the case. For the reason that it has an infinite number of sounds and guitar branchéee and your touch will still greatly influence the overall result. So, we must often go tridouiller between two pieces if you want the best fan out.

The merged équalo is also a problem.

Potentiometer for adding crunch in the clean is well thought out, but gives a little more complicated as the end. Especially regarding the differences in volume between channel one and two.

By-cons, the stroke of knobs is accurate and all we want to change quickly changed.

The head offers a staggering range of sounds.

To understand this head, he must explain the concept. First we have a head that is very dependent on gear connected. She then extreme sensitivity to touch. Even with the crunch channel gain to knock, if I stroke my notes, it will be clean.

Channel 1
To clean, it is possible to mix the channel with the crunch channel two. This not only increases the volume (although slightly higher on channel 1 on both), but also adds to the possibilities of large channel sound, because, of course, even with the volume pot thoroughly, it will not same grain, or as much gain as the channel 2. The sounds of this channel varies between a clean voxien a little darker, but nonetheless, still merits the designation bright and warm, rich throughout its range. When you push the blender and we play with the gain, you can get sounds with a little crunch inside, perfect for the noodling and blues, and then attack sounds like 1959 or bluesbraker slp. I note also a difference depending on how you play.

Channel 2
The sound begins with a very low crunch, which bustles well into the bass, without seeming chemical. Here, you feel perfectly intake lamp grinder, often absent on competing products. So, it produces a consistent sound that carpet, when the gain goes up, will begin to scrape (positively) in the treble and midrange have a tendency to thicken. Basically, you can go from a sound like "screaming vox no" to that of a head Crate Blue Voodoo (with a little less gain and more balance). In between, there are sounds british-reminiscent of some great old Marshall despite having one leg of their own.

Note also how grain tends to compress when you go up the gain on that channel. This is not a defect, on the contrary, it contributes to the side multi-use "of the craft. But suddenly, I do that almost always plays on the beginning of crunch, just sublime in its articulation and its width. And then, I insist, it stands up with the best of high end.

I was also surprised by the amount of available gain, I even find that there are too many and not exploits beyond the middle. Roma him, with his TV could go further and obtain gaineux sounds good too. Note that when you plug another guitar while developing sound changes. With the warrior I had a medium a little more tortured, with the Gibson CS, I had a more equilibria although very rich in bass, with the TV sound, thick and deep enough. A KILLER SERIES! No matter what you hook up, it takes the characteristic of the instrument and send it to you in your face.

Overall, EL84 push will not sound better run its course, it is better to play with preamp. The 30w are super exploitable, even if it is already too powerful for the games apart. In house or locally, it is perfect as it develops clear already from "2" when you&#39;re live, we put it on "5" and it means more. In short, it is powerful enough for everyday applications.

I use it for two months now in a multi-head set. I love the flexibility of sound, its great sound culture and the fact that we can exploit in reasonable volumes.

I tried almost everything you can buy before I buy it (Bogner, VHT, Twintone, Egnater, Two Rock, engl, Matamp, Laney, Marshall, Vox, Suhr, Reusserzehn, Mesa, Randall, Madison, Crate , Splawn, Krank, Soldano, Rivera, Bad Cat, Matchless and abridge ... because he has-there-yet). I hesitated also between it and a VHT (sorry Fryett) UL. In the end she won the game for its excellent sound and a real friendly prices. It is true that many other brands we sway their heads for custom are totally unreasonable on the grounds that it is American and that Americans are the coolest.

I did it import from the USA, European version directly (as possible). The representative in Poland wanted almost a thousand euros more. BOOOOOOOOOOOOOOO

Little Quack purchase, let go of the fuse for ignition due to a very tight tolerance calculated. I created a topic in the forum section at address (very easily and with minimal cost) to this problem.

(9) highly recommended, this sounds budda offers professional quality at a budget of just 300 euros more expensive than a Bugera. A serious study.

Edit: try a guitar with this amp, the Gretsch White Falcon. Looks like they were built to meet, what is abused can attack with different styles like this pair.