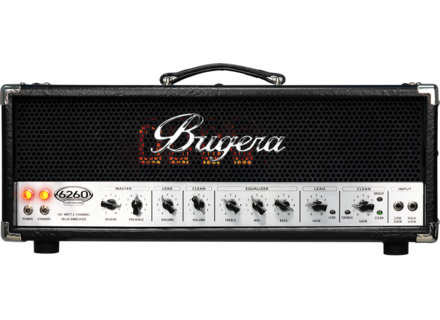 seinthomas's review (This content has been automatically translated from French)" Unbeatable quality / price!"

Bugera 6260 Infinium
5
I will not do too much technical detail of the beast, full of sites will do that better than me.
Rapidly head while 120w lamp (a lamp pre-amp less compared to 6262), two channels sharing a classical equation 3 bands, reverb and loop effect can be activated via the pedal, and the presence control is enough important live / repeat.
Infinium management system lamps, in time to see if it's really more for the time in 3 months I can not say. Nothing frightening in the table but it is also for simplicity I chose this head.

The configuration could not be more simple, here it is efficiency rather than tinkering excessively. It happens to have 90% of the search in less than 5 minutes the watch in hand. the remaining 10% are refined over the repeated and beer we drink

Clear manual for a beginner to a confirmed this lack of information, particularly concerning the positioning of V1, ...., V5. I had to call customer service to have them.

This is pure meat, very incisive, subject to huge gain, distortion tight grain.
It can be very dry and focused on mediums like heavy and dug the equalizer to a wide enough to fill a lot of style rendering.
Mainly played with a Gibson in EMG81 I do not exceed 3.5 on the gain knob.
The Cab used greatly affects the rendering for the hardcore I play a cab Hughes & Kettner mounted Celestion Rocket 50 which grows a little grain and increases overall to thrash a Marshall cab mounted G12T75 emerges more mix and less runny, the difference is obvious.
colleague played on a 6505 with the 6505 cab, the mix of the two is perfect.
Tried with a few rehearsals for Strato blues / rock, to really clean channel potential, the crunch is very good as well and go far in the gain. People were quite surprised that channel besides, who can really go a slight crunch to a significant saturation with excellent sound reproduction. The digital reverb is not too bad, but compared to my 8240 marshall is really worse. Beyond 5 rendering is synthetic. A small dose so.

Only downside: soufflerie.com
The noisegate is the friend of the head, at least when you are in configuration repeats or live. Besides, you can play a volume apart, but the result is really poor. You have to push at least 2.5 the master to "liberate" the sound. And this volume is already the neighbors knock on the door screaming foul. So for people who are wondering, yes it is possible, but for quality sound at low volume attenuator essential.

a little over 3 months with this head therefore has to his credit thirty repeats and two concerts.
RAS for short-term reliability! the delivery against I had two lamps that were microphonic preamp, my Bugera replaced in their entirety without flinching and without return head home. Rather nice I must admit.

Before this amp I had a head H & K 100w transistor coupled to a Guyatone Metal monster that filled his role well, but limited power. After 6.5 to master it would compress the sound, loss of dynamic Grain draft. With Bugera Exit such concerns, much more dynamic, no loss in function of the Masters graour lamps Palm Mute is still something else let's face it (even though I keep my H & K backup

The value for money is just hallucinnant I play next to the 6505's colleague and frankly it does not have to blush a bit. After quite a concert guitarist came to tell me that "burger" sounded good when even chopping enc ***: D

I hope this helps you in your quest for the sound! Good one guys!