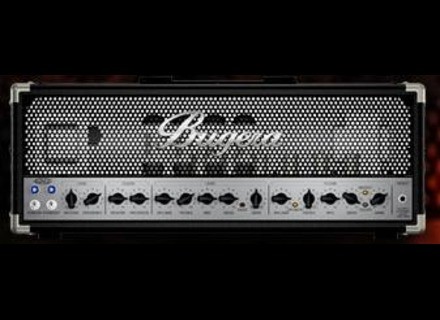 6262, Tube Guitar Amp Head from Bugera in the Modern series.

All user reviews for the Bugera 6262

Average Score:4.8( 4.8/5 based on 4 reviews )
Value For Money : Excellent
Not satisfied with those reviews?
Our members also liked:

Djaystar's review (This content has been automatically translated from French)" Excellent"

Bugera 6262
5
It's a head tube amp (6L6 or EL34) with a power of 120W.
2 channels, a clear and lead. The channel may also become clear crunch with a button front and it's a negative points that it is not switchable on the pedals. For the cons levels SETTINGS is a joy, each channel is completely independent of whether it's equal, the presence, gain, reverb is adjusted each sound as you want it's great.
The volume pot is accurate, they respond very well may be just adjusting (to his taste, of course!)
Level connectivity, a stereo speaker output from this is simple:
1 input
A preamp out
An effects loop (send - return)
1 outlet baffle left
1 outlet baffle right
The switch comes with plugs into DIN plug.

Setup is extremely simple, barely plugged in, it itches a bit and have good sound! The manual is useless! is a simple and effective head!

I played on my Peavey Bandit 112 before then necessarily all on this amp suits me but it must be said loud and clear: STOP BUYING THE BRAND AND PREFER TO PAY THE QUALITY! this amp is exactly that! he has big rivals next to him despite its low price!

I play mostly hardcore punk limit, because it is very versatile I managed to find the sound I wanted without any problems. Sounds at once heavy but keeps a certain brilliance rock'n roll, I think the lights are there for much .......

My guitar is a CORT that a little over ten years (even in good years to Cort wood) with EMG HZ pickups like the bridge and 2 single Seymour Duncan for the rest.

I use the HZ essentiellment lead but when I want to do a little quiet, clear sound is excellent with Duncan. Small flat, do not expect too much from the reverb on that side is not really terrible.

Since August I use it I really struggled not to trim. I am trying to build him a nice flight case to transport it without too much damage.

Complete all that I would return later.

Excellent value for money and I would do this choice, I'll even look more ready this brand!

We need to hurry in a Aquer before it undergoes the law of supply and demand!

johncobalt's review (This content has been automatically translated from French)

Bugera 6262
5
The description is widely commented on by previous opinions, avoid duplication

That arch-easy! two channels with EQ very effective. You can find the sound immediately. Not need a manual, unless you do not know head and matching cabinet (at Ohm) In this case DO NOTHING WITHOUT YOU READ THE INSTRUCTIONS! You may damage your amp

It is a very versatile amp, it will sound good pop-rock sound that big patch ... It can range from a vintage sound in Van Halen, to a heavy metal very well today. And if we lower the channel gain crunch, it's been a very good vintage blues sound. But where it beats all its competitors is the grain ... A true grain lamp. Nothing is emulated, nothing is imitated. It's bold, it's hot drool just what is needed is clear just where it should and it does justice to the guitar. Indeed I have always found that big amp disto ended up doing very concise and cover completely the personality of the guitar. I get to keep this record in the grain mix. Very hard to do when you have to prune frequencies! Most amps "entry level" / "medium range" merely boost certain frequency ranges to make a big sound "artificial" ... we remove the low and high frequencies, and it was something less than a stomp to 50 € ... Here, these mediums are warm and clean, the treble does not "scream" not even using the Presence and the grain is present on all frequencies .... it's alive, what! Sound, very organic pet. I heard it on the head to 1 600 € ... There's even some brands that are no better than 2000 € ...

I've had several weeks, I am delighted. I tried the Custom Audio Electronics, Carvin, Laboga, Peavy, EVH, Soldano, Mesa Boogie, Orange, Marshall, Blackstar ... In short I want a all-tube amp for a while ... For more than a Bugera, it is necessary to € 1500 more ... which makes it unbeatable ... True, it will never happen to the ankle of a Road King or an OD-100 ... But in a mix, after equalization and mastering, I challenged anyone to make a difference. I made the cover of Whitesnake and Winger (CAE OD-100 for both! Lol) and frankly even listening, the notable difference is that it's not Reb Beach playing ... Other than that ...

Petit added a few months later:
One thing should put a flea in his ear to our skeptical friends: there is very little chance. It sold a ton during the Christmas holidays .... and everyone keeps them! There's one or two good combos leboncoin.fr on a 6262 right here ... and that's it!

If it's as crappy as you think, why people keep them? to meditate

sugarSG's review (This content has been automatically translated from French)

Head 120W all-tube guitar amp. Regarding connectivity, the amp has an effects loop. After all there is more banal: a 2-channel equalizer per channel = - a clean channel that has a crunch mode and function Bright.
- A lead channel.
The head does not have built-in effects apart from the Reverb.

As I said above, the configuration could not be simpler and does not require reading the manual (in all languages ​​useful).
The sound can be adjusted very quickly and we get good sound in a few minutes.
The supplied footswitch allows you to navigate between the two channels of the amp and also controls the reverb and effects loop. The only downside on the footswitch, the sound clear and the crunch can not be controlled separately. We must first choose the amp footswitch selects the sound or light crunch (same for Bright function).
Both equalizer can refine the sound. As against the clear sound is a little dry despite a setting closer. The presence to play with the gain for a more or less warm. The lead can be changed quite a bit with the equalizer and a lot of sounds are possible.

I do not really particular style, for cons I love the sounds fat and warm clean. I plug in a Gibson SG Reissue 61 and an Ibanez Ergodyne.
As for the clear sound with Gibson, the sound is quite "flashy" and the clean crunch very easily. The sound was clear the weakness of the amp. on the other hand in the crunch you get a pretty rock n 'roll and the grain is sufficiently precise and drool just right. One recognizes the grain typical of the SG. Then we can dig the sound with a Big Muff to make everything a little more fat but pay attention to feedback for those who do not like.
As far as the Lead channel on the heavy tackles. The compression is felt immediately and the sound of British rock is unthinkable that channel. The sound is pretty metal type and spits right away, the sound approaches a Hughes and a Peavy pushing the presence and gain. Gibson makes the grain drooling but there is very precise and accurate. For those who want bold sound in the style of an Orange one must have recourse to the Big Muff but watch their ears. You can also get a sound very thrash metal obscuring the middle of the equalizer.

I use it for a short week and I can say it's a great metal amp typed. The bluesy sounds are quite difficult to get clear sound and no heat from an Orange or even a Marshall (JCM 800 Ancinnes of time). By playing against the Deftones, Tool's basically if you want a relatively compressed with a fairly neutral grain this amp will delight you.
The price / quality ratio is very good and the amp is quite affordable.

pierrotscorps's review (This content has been automatically translated from French)

Use could not be more simple
two separate channels with gain medium bass treble and volume on each channel preamp
presence and reverb on each channel separ
Note that the reverb, callable at the foot, is indpendante on each channel so if you want it not on the lead you take it off and if you want to clean you put it when you return to lead it there will be not and when you pass by it will be clean
I is not read the manual because it is not my amp but I tried one of ericslide

Finally I would be curious to try again by changing all the lights to see if the preamp is radically changing the original as it is mounted with
1 x 12AX7
1 x 12AX7B
4 x 12AX7C
I do not know the manufacturer
I put eight crunch because the clean channel is not great (but hey it is not appealable as of pdalier ..)

First of all I would say to dtracteurs this brand as it is distributed by prtexte Berhinger go down the amp and this without having tried to go just to try it
I recall that the head 498 is a reseller of a country abroad that I do not name (it is not to make the pub and the more I think it is better to try before you buy So to motivate his shop in the corner to make it back)
I also remember that for a hundred euro supplmentaire you can have the combo with the only diffrence is the knob of dispostion
if you squint a 5150 do not buy this amp because it is not the copy is a less CHRE BUGERA BUGERA with her that my faith is exploitable trs
as you'll understand I had a 5150 before blowing a lot and "feedback" as well by the breath of the lightweight channel lead the rest is nickel
I prcise also that I did not buy this amp because I invested a few scrapes and we do everything but it is not impossible in the future that I paid so I took over the music as a group because I will not ericslide 3500 in a head amp that is manufactured with components that come from (I know I will not say something stupid )....
I put 9 / 10
report quality and unbeatable price at suprieur ValveKing amps peavey home (yet) running in these prices as
a look that leaves no indiffrant and then if the word you BUGERA ESG There's two screws to remove
try run