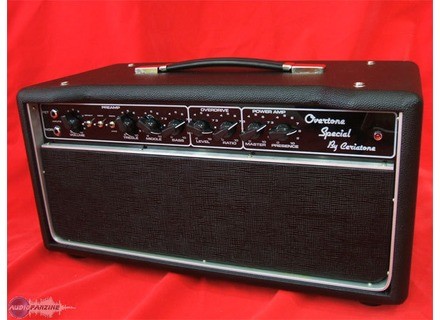 suzannev's review (This content has been automatically translated from French)

CeriaTone Overtone Special
5
Amp lamps 50W (43W to measure) with 3 x 12AX7 pre-amp and 2 x 6L6S power (100w version has two additional power tubes).
Architectural drawing (probably the closest) amplifiers designed by Howard Alexander Dumble amps who made custom for artists such as Santana, Robben Ford or Larry Carlton. So, quality components, with full respect of the grain of the guitar, a pre-amp boost Snap foot. You understood, here is the preamp which is highlighted (after all it is he who gives the "color" of the amp, the power part is rather difficult to do except cruncher with the volume to max .

Two inputs, a NOR (badly) for single or double coils, a FET (Field Effect Transistor) for the acoustic (piezo) if so, strange as it may seem.

No manual is issued, the community is active (and www.ceriatoneforum.com www.geargas.com) as passionate. It provides, submits and implements changes to the hardware itself (which can be bought in kit yourself, for a lower price of course). It is the only positive point less, you really go fishing for info. He deserves this!

It is easy to get a good sound, starting with the clear. That said, the settings are many, sometimes subtle, interacting significantly with each other. What takes the most time is to understand the philosophy of Dumble and passion of those who want to walk in his footsteps. They propose a standard configuration (but it varies with time and experience gained by its manufacturer and the majority of feature requests from users), the amplifiers can also be customized on request.
An example is a button-Trim OD located on the back (for convenience of connection), it is actually a button for "volume" acting directly on the power tube V2 and adds or not the Overdrive (V1 is the preamp lamp designed to amplify the sound and the lamp V3 phase inversion)!
Another example is the proposal that Nik made me use a switch innoccupé to install a switch to half power, which I gladly accepted (no additional cost).

Regarding the settings a bit particular, engagement of the PreAmp Boost bypasses the EQ section but the previous switches remain operational. "Deep" plays on the media. "Jazz / Rock" plays on the gain and low mids (at least in the way Jazz). Ratio is an independent volume for the overdrive. For the rest, no decoding to be done.

To note, between the lamps, points of tests of bias power tubes. A small volume pot allows, inside, adjust the bias. The device does not change for any lamp (medium, proper voltage, etc..) But leaves some room for testing, the risk of the owner (within the beast, you touch voltages fatal ...).

Last but not least, Nik is a great guy! American attitudes therefore effective and without embellishment: he appreciates the clear and prompt decisions, but knows how to take the time to answer questions.

Like many other models of the brand is an amp for passionate, who asked to be discovered over time and its "running". Without being elitist, it provides an element of mystery that makes the man / guitar / amp very personal and special. Handmade, amended at the request, his wealth gives him all her interest in the long term. It is not Plug and Play which is likely to be bored.

With its beautiful clean tones, it is obviously to jazz, rock, reggae, folk even taking FET, and blues as well understood.
Difficult to "break" the power amp for Rock / Hard and beyond. That said, it pedals very well cash in front of the loop. The latter can be enhanced by a special plug (C-ulator or Klein-ulator choice) to better manage the volumes, the loss of high frequencies (Treble Bleed).

With regard to the crunch, I still have a little trouble because this amp challenges the guitarist and his game he can rediscover his uncompromising instrument with any requirement that implies.

Having removed my Stratocaster for mods, I tested it with another guitar (pickups and split single / double coil), it sounds like she never rang. But each roll is paid cash. I still can not say what settings I prefer because I am far from having fully discovered. In any case, as one moves from clean to Boost preamp or overdrive, the sound of the guitar is still there, recognizable and faithful, without any artifice.

I use it for a week and I love his versatility. However, for good rock music, it would take a "clone" Marshall of the same brand. Regarding crunch, I would have perhaps preferred a Brown Note making them softer, like the Cream of the Cream knob Can of Benrod, but the price is double!
I have not tried many styles but I&#39;ve listened a lot. I am also much documented. And I&#39;ve been thinking about the sound I want to approach it without wanting to look like ...

I remake that choice without a doubt, the quality / price (1200 € amp complete with plug-mounted effects loop Klein-ulator and shipping) is one of the most interesting market (think still costs customs obviously, about 20% of value), compared to its competitors (Zendrive, Ethos Overdrive, Brown Note DLite 22/33/44, Two-Rock Emerald Pro Fuchs Overdrive Supreme). Also note that some pedals are in the same spirit (Bludotone, Glaswerk Overdrive Deluxe Bruno Super 100, HAO Rumble Menatone Howie).

This amp is more like a treasure and we must treasure every requirement, humility and patience to find out.

02/07/10 ADD: I confirm that the receiver accepts pedals very well, and before the preamp in the loop. To adjust the levels in the loop, the addition of the Klein-ulator is a plus because it helps manage the levels of input, output, so the loss of volume and treble through the presence of two switches "Bright ". Without pedals, this module provides a bit of what the Cream Can from Benrod can make itself, without overdrive, ie sound a bit polished, softer, without losing its sharpness.


20 of 20 people found this review helpful