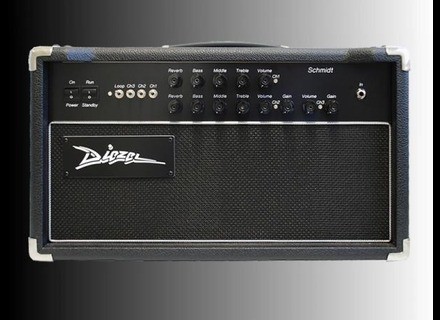 Diezel Schmidt
5
Diezel amps first became known in the industry in the mid 90s when they started showing up in the back lines of many big name metal players. Now they are most known for their super high end high gain amps. This amp has more of an old school feel to it but it still has tons of tone. This is one of their smaller amps but it is still pretty complex. This amp has 3 channels controlled by 2 sets of eq controls. There is a set of master controls that control the gain and the volume. There are two independent preamps. The first one being a clean channel the seccond one being a dirty channel. The last channel is a super high gain channel but shares settings with the dirty channel. The guts of the amp are built around 5 12XZ7 tubes with a 30 watt Class A power section that has a couple EL34's. You can swap out the EL34's for 6L6s is like. The Schmidt can also run on 5881, 6L6, 6V6, KT66, KT88, EL34, and 6550 power tubes.

Although these heads may look pretty small compared to other Diezel amps they are still pretty heavy. This one is around 50 pounds. This is mostly due to the Class A power section that the amp has. It looks a lot like the old Mesa MK heads which were pretty small.

This is the most important part of any amp. The clean tones are huge on this amp once you dial in a bit of reverb. It is very easy to get a good clean tone from this amp. The clean tones just have the slightly hint of breakup. I like this in a clean tone as it makes it sound more organic. If you crank the clean channel you can even get a usable distortion tone. You can get a nice loose stoner or doom metal tone with the clean channel cranked and maybe a bit of drive on it. The eq controls are super responsive on this amp. The overdrive and dirty tones are what Diezels are known for. With the EL34's that this amp comes with stock you get more of the classic British overdrive sound. All the tones have a smooth quality to them. You can turn up the treble without it becoming harsh and painful. The overdrive channel has a nice clean tone to it as well as it cleans up very well with an adjustment to the volume knob on your guitar. Lead tones are nice and smooth like a high gain amp but they still have a bit of bite to them and crunch.

While this amp may not be a fire breathing monster like other Diezel amps it can still hold its own and it does it with a more vintage British vibe. It has a looser less compressed feel to it which is nice. If you want a good rocking high end amp but want it to have more of a classic feel the Diezel Schmidt is a good option if you can afford it.

Diezel Creates US Branch, And More

Published on 01/08/09
Diezel Amplification has announced the creation of Diezel USA, due to "increasing product demand and heightened consumer awareness," according to the company.

See all 35 photos of Diezel Schmidt »