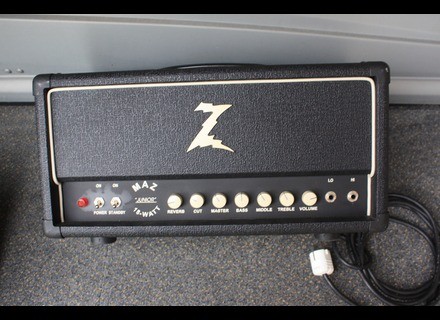 Dr. Z Amplification MAZ 18 Jr. Reverb Head
5
These amplifiers are quickly becoming one of my all time favorite clean amps. Dr. Z has such a great classic rock tone and what they are all about it pure tone. They have a solid tone and many artists are using them on their records and live touring stages. This amp is very popular with the country players. It has a great tone for guys you like to chick pick and get that chimy clean moderately broken up overdrive sound. These amps prides themselves on being somewhat versatile but more user friendly tone machines. These amps are great for just about any style of music other than metal. This amp is thr same as the combo but just in a head version. You get the same great features and tone as the combo but without the speakers.

This amp sounds very big and that may be one of their selling points. Their amps aren't a hole lot of power but have a brilliance of volume and girth that make them sound incredible. The tone of this amp is pretty good. It has a nice blend of the power tubes and preamp valves. This is an amp that will take pedals very well. It has a nice effects loop to allow its user to insert delays and chorus sound into the effects loop and still keep the same preamp tone. For not being a whole lot of power it still packs a big punch in volume and tone.

These amps have a familiar control knob called "cut" which you may have seen on another amp called the Vox Ac30. This allows you to dial in some of that class grind. The "cut" knob may be the most useful and versatile tone shaping tool on any guitar amp. Throughout its range, it produces a large variety of sounds to satisfy players using all guitars for most every style of music. The "cut" knob is best used after the EQ is all set; turn it up for extra edge, turn it down for a more vintage sound.


At new these amps come in right at around $1650. That is a great price for an amp that sound this good. There is no up charge or down charge for this combo in this grill cloth custom change. Some other colors and options to charge more but not this one. It is a very usable gigging amp and will treat its owner quite well. I would recommend this amp to anyone who used to like s a good clean tone that can get a solid chimey and sustaining overdrive tone.

boobyz's review (This content has been automatically translated from French)" Dr. Mazette"

Dr. Z Amplification MAZ 18 Jr. Reverb Head
4
This small head is 18w, with a great range of lights and a circuit point by point.
The reverb is powered by a separate transformer is quite class.
Two EL84 power for two ECC83 in V1 V2, an AT7 for reverb and the rest 12AX7 and finally, the icing on the cake, a GZ34 in grinder (I put a TAD STR)
Mine in the "loop", but I do not use it too much because the pedals sound better when you attack the guitar input on the amp.
The look is really nice, it's well made, sturdy, what U.S.

When you open the beast, we see the good work, it is quite airy, and there are many capas orange logotée DRZ, Orange drop actually selected.
Equipped with a power supply cable of very large section, it gives confidence immediately.

This is a single channel with a three equa tape, cut very useful (presence inverted), a master who keeps the AC niaque amplifier and a flight of reverb.
Weaknesses:
Medium correction is fairly ineffective, say very subtle.
The reverb hums when riding too bad because this is a really fabulous reverb.
Strengths:
The cut that allows the calm side of the amp bright enough and fit the selected hp.
The relationship between volume and master allows multiple combinations, clear sound jazzy or slamming to crunch incisive or fatter (Think of the first agreement of Experts)
Even when it is nasty this amp, I suggest some further mods to make it more docile.

In my opinion, all these orange drop, this is not good (except for country)
So I put a small variegated TAD instead, I add a switch that changes the value of the input capacity and I did inflate the values ​​of the loop and some capas having a decisive role on bass.
Then I tested several hp.
The Heritage G12H = open, creamy, big bass, treble present, medium flat
G12H Anniv = The more closed, more tight or frequency, its very "caramel"
Its round alnico blue = warm, with plenty of medium compression and a nice treble.
Each hp brings the amp in another direction, I confess to a preference for the G12H anniv
These mods make the amp more mellow, but without losing the personality of this very interesting little amp which sends very strong.
I lost a little effect against "3D" which is very present on the receiver base.

Power is perfect for group play, we can grow, cruncher, the booster pedals with good shops that are really highlighted.
it is a circuit 2XEL84 enough ringworm (via I advise TAD "mullardisées" and two GE V1/V2 that will add fat)
The choice of hp remains crucial, however it is quite easy to modify (PTP)
This is a very good amp, fairly typical, it is not a big Marshall or a Twin, he's really a very personal, but rather adictif.
Without being super versatile as a MARK V is an amp that allows you to vary the pleasures playing with the trio vol / gain / cut.
Provide (in my opinion) some mods to calm his side "ringworm", unless you want that kind of sound (excellent with the rest Tele or stratum)
For LP, it is better to look at the side of Marshall clones, but I manage to enjoy playing "jazzy" above, as anything!
In any case, a small head very endearing, especially with a boost Lovepedal in the gums (the COT50 miracles in this amp)
For those who love the bright equa with a fairly flat, in fact its quite the fashion for the modern blues.