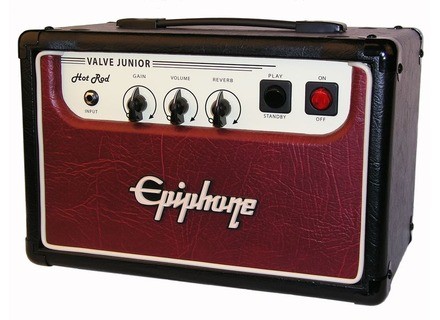 Epiphone Valve Junior Hot Rod Head
4
The Valve Jr. Hot Rod is a factory upgraded model of the original Valve Junior Epiphone put out a few years ago. Most players were modifying their stock Valve Juniors, so I guess Epiphone decided, shoot we'll make even more money off of this great idea we had.

The original had a only a power switch and a volume knob, the hot rod has a gain and reverb knob as well as a standby.

I was a fan of the old Valve Jr. and I had sold mine, so with a bit of seller's remorse this upgraded model was an easy sell. It set me back $200 online.

It's simple and well if guitarists were to be honest, they have way too many knobs on their amps as well as how many gigs does the Average Joe play a year where he needs 100 watts of tube power?

Since it is easy on the budget, I'm more carefree about this amp. I can leave it in my car, let a friend borrow etc.

I really like the way it sounds through a 4x12 cab. The tiny thing can really drive a 4x12.

If I designed the amp, I'd have gotten rid of the lackluster reverb and added a tone knob instead.

Well built. It isn't high quality. Hi-Fi audiofile guys would gawk at the electronics, but it's built for guitar players to have a cheap tube amp.

Another fun amp. It takes pedals well and can drive most cabs with multiple outs for 4, 8 and 16ohm cabs. Would make a great backup if not number one gigging amp.

mymoustache47's review (This content has been automatically translated from French)" unconditional"

I play Blues, the Chicago, with Reverend He is comfortable in the sounds a little fat and the guitar is versatile enough to go from the amp tone.

I for one week, he is super nice and simple. I had almost everything except the Vox and Marshall, although my Watkins Dominator is what Jim Marshall pumped for Bluesbraeker ...
From secondhand, € 180 with 12-inch cabinet, all in a "lollipop", it has nothing at that price my lil 'lady.

Personally I only use very little fireworks with my amp distortion or an overdrive a boost and possibly a delay reverb associated:
So its clear we have a pure sound quite round but with a color of its own I think it's an amp for a specific style such as blues and rock at all for my part I am quite well it is presented sound and precise enough slamming and especially hot enough accuentuant mediums rather well and this even at low volume as you go up the lamp comes gradually and the feeling of presence responds well (I play on lag roxanne 500 guibson les paul supreme American American Deluxe Stratocaster and more)
By saturating it remains quite disappointed when still remain even in the same style registry so well for me while keeping his sound specific but I think it will not please the most demanding sound level
For me it lacks precision in the register
The lamp has reverb is pretty saturated in clear changes a bit I would explain but it is always useful
Try anyway because he asks to be very exploitable seen what it offers in comparison to his colleagues of the same class (I think a vox bleackheart and other)

From its five W's surprising power for the apartment is cool neighbors are thrilled we'd love a cruise or something like that to pass a 1 Watt, for example it helps even more.
For the sound I already stated above
When you put it honestly effects must settle all this takes time as well but it's worth because the cash though because it seems a natural view

Frankly to try and purchase in general sold his cab 1X12 epiphone between 170 and 300 overall and close to 400 all nine
For a lonely and I in the apartments ca serious matter I truly believe that repeated and live in it should be enough if somewhat above the tank but when even that sends strong
Good compromised anyway because all that remains lamp 5 w do everything correct and the price and I got it it's worth going to look
Now I have seen further notice and changing two or three things you can apparently make a beast even more exploitable and interresting in its origin without artifice with just a scratch to see (I would give you notice when I do The changes I will explain with small video on my youtube (magixfingers91100 in research) not modify and change)
Stay tuned for new adventures.
I'll wait to use it anyway but I do not regret this purchase at all
Contact me if you have questions or other
Musically
Magix Fingers
Did you find this review helpful?yesno
»

framby's review (This content has been automatically translated from French)" Epi-phone?"

Epiphone Valve Junior Hot Rod Head
4
Everything is said in the previous review:

With three buttons on the grill difficult to get any easier ...
Presence of a stand-by for the preheating of the lamps. Not found on other amps of this price.

Tests in the cab with eminence shop open and semi equipped with a Les Paul P90
As on previous opinions on the lack of roundness and gloss, really too focused in the medium - medium high.
The definition is pretty nice even by cruncher lamps (the lamp finally!) A good shot.
The reverb seems nonexistent. After 11h at knob it only appears to cause an effect ... emetic.
The dynamics of the sound is good but not excellent ... Half shade ...

First try at home with a small cab 4x8 Blackstar "and a Jaguar (j'étofferai paragraph as and a measure of usage):
The dull side of the amp goes well with the sound (very) bright Jaguar and gives a result rather well balanced! The cab (closed) gives him a comfortable seat in the lower spectrum without being too (much better than the Epiphone cab) and it's a beautiful clear sound that comes out of the beast!
Going up the gain it through good crunch to a small overdrive limit.
By adding a small overdrive pedal (just a bit to boost the level) saturation appears well and keeps a beautiful beast definition.
On sounds very saturated the bottom of the spectrum loses some precision and brightness decreases. At the same time, he has not had an amp head to the Black-Death-grind-Xcore swisscheddar-metal.

Used for a few hours my opinion is not necessarily the best.
But having tried several heads (between 250 and 500 roros) this little Epi, 120 € in a supermarket promo music, though filled his office and report quality / price is more than interesting.

At that price no frills, one branch, we play. Well enough to work at home (we keep the stack Hiwatt to the Stade de France).
Did you find this review helpful?yesno
»
Read the 6 user reviews on the Epiphone Valve Junior Hot Rod Head »