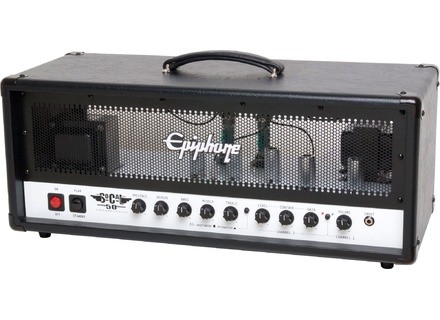 Phoenix-63's review (This content has been automatically translated from French)

The settings are: Presence, Reverb, Bass, Middle, Trebble, independent or interactive EQ, then the Crunch channel, a gain adjustment and contour. Each channel has a level of knob, but no master general ...

The configuration could not be simpler, for one can be against it time to get to shoot something independent EQ's drinking ...

Easily obtained a good sound, I personally have started testing the various "presets" proposed in the manual that provides a good basis, but I quickly found a sound that is perfect for my game and that both clear that saturated ...

The manual is very clear, somewhat succinct (for people who have never used any of the lamp), but we really need to not ...

This amp is perfect for my style of music (Rock Experimental, Blues, Rock 70'...)

I play with a Gibson SG junior reissue, and sometimes I add a Behringer VT 999 for solos, but in my opinion, this amp was designed for the P90.

This gives very nice clean sounds, not crystal (with my guitar but I will soon play with them telecaster) but still well-defined focus, however, the headroom is rather limited, do not expect to play with Pantera .. .

I use it for a month, I know it's not, but my instinct would have told Auvergne before the exchange if I had this amp, so it's good stuff, it seems solid, j ''ve tested a lot of amps before this one prestige, of course I can not compare it with an Orange or a Fender Hot Rod, but in a different style this little amp € 320 is doing pretty good . For all guitarists who want to cut down still have fun while on a 2 lamp body, dark, and, if you're really poor, then wedge a vintage Harley Benton G212 below, it goes pretty good ...

With my experience a month, I would definitely do it again this election ...

syle's review (This content has been automatically translated from French)

- Power: 50 watts in pentode mode and 25 watts in triode (switchable)

- Rglages:
* Found in order, the following potentiomtres: clear channel Volume, Gain, Contour and Level Canal saturated Treeble, Medium, Bass, Presence and Rverb, 9 knobs.
* 2 switches in faade: one for the channel change, the other two types of CASC provides operation of the equalizer (indpendant or interactive).
* 2 switches (On / Off and Standby) in faade
* 1 Switch Pentode 50 watts / 25 watts Triode

Everything is very simple to use.
Indpendants two channels, while simple, like the vast majority of guitar amps ...
Rglages level, the trs qualizer is effective, it will need a little refining rglages to find your sound, but it was quickly at home! So no problem in handling particular.

Just a BMOL: indpendant EQ mode takes a little practice to get something good ... In fact, for my part, I remain interraction mode (same function as other amps).

The manual is in English only, and to be honnte, I did not read. It is doing well without trs. However, some examples of SETTING THE INTERESTED base that can be for any Premire grip.

I tried this amp with a lot of guitars diffrent (Start RI 62 &#39;Lite Ash Telecaster, SG Standard, two Washburn, a G400) and pass it with all these nickel chrome scratch, respecting tr s trs out their grain and their respective characters.

Canal clean:
It is thundering!
At 50 watts, it is both round and slamming, trs hot Fenderien strangely in the mind. Full of dynamic ... happiness!
Mode 25 watts, has softened a bit and still win in heat. It&#39;s been a little more thinking that gives an example Laney VC30.
Otherwise, a lot of headroom: cruncher to clear the channel, trs trs have to play hard!

Distortion channel Epiphone announces that it is a head "high gain" ... and we are away! It is clearly oriented blues / rock. The gain will seek ct of ACDC or Aerosmith, but no more. As against this channel lead Ragit trs well when he puts an overdrive pedals in the pif to boost the gain, and we arrive in the area of ​​hard rock with no problem.
For the mtal ... Well it is not for a. It remains possible with a well-sr pedals adquate, especially as the clean channel offers a good basis trs.
At 50 watts, the grain normment recalls that of a JCM800. Granular rpeux wish, not compress very dynamic. Trs Marshallian, really!
Mode 25 watts, tightens the grain a bit to be more crmeux, softer, trs always hot and even more dynamic.
The Contour knob, ddi lead channel, plays on the rendering of mdiums Fawn quite drastically. At the top of the race, we are in a sound british Marshallian trs. Beginners in the race, there is a more modern sound amricain ... and between the two ... is in between. Personally, I do not m&#39;tendrai the above, since I had always leaves the outline of del 2 / 3, which is my gots.

The Presence knob fits perfectly and allow you to rle rgler prcisment the agressivit of the attack.

Reverb
It has a standard frankly, actually ...
knob noon, the effect is stronger ausi that donf on my Hughes and Kettner. In the middle one is dj in the world of surf-music! So we should not push too much, otherwise the sound becomes unintelligible. But reasonable rates, it is nice trs

Power:
It sends svrement ... And as expected, the 25 watt mode plays a lot on the grain of the amp, but the power diffrence is negligible.
The clean channel can be exploit relatively low volume (so to play the house), but the lead channel, it is not even worth thinking about. Or, must juggle the gain and level (the gain is lowered in order to raise the level a reasonable rate), but then will obtain no more than a little crunch (very enjoyable incidentally).
But hey, we can certainly always find a way to average, but this is clearly not an apartment amp.
on the other hand, in a group, you never run out of power, even in the mode 25 watts!

I use this amp for a few days, but intensively.
I tried many amps before choosing this one, and the price not really a n&#39;tait CRITERIA. If I had found an amp I got more for two or three times as much, I would have to buy patient.
L clear that both saturated my grain I was looking for.
Clear, warm and dynamic hyper-clear sound, and trs Marshallian saturation. On the lead channel pentode mode, I RPET, we are really in the world of JCM800.
For cons, I RPET is not an amp for apartment because the power comes quickly trs. It would have to have a t INTERESTED gnral Master Volume amp to make the home more usable.
I would also have AIM a bit more gain, but nothing serious as it loves to be a boost overdrive.

In the end, I love this amp. That&#39;s exactly what I wanted.
The rate is down around 320, and report qualitprix level, it&#39;s almost supernatural ... I can not understand why they sell this amp so cheap ... but good for us!

In short, an amp I would highly recommend ...