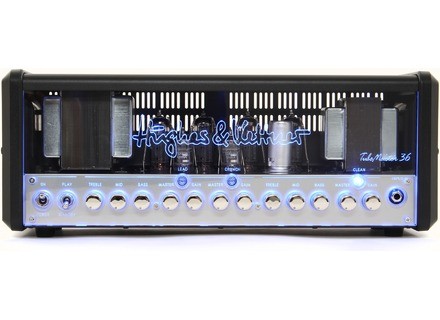 Hughes & Kettner TubeMeister 36 Head
3
I am considering buying a used Hughes & Kettner Tube Meister 36. I am not able to get the effects loop to work. I have a cable running from the output on the chorus pedal to the send on the amp and a cable from the return on the amp to the input on the chorus pedal. I get sound with the pedal off, however, when I activate the pedal I get nothing. Any thought?
Did you find this review helpful?yesno
»

Disappointment, I thought we could save the south through its presets: that's true but it only saves Reverb On / Off, Effects On / off loop, power level (0-1-5-18-36 ) and channel: the problem is that we do and neither stores nor EQ ESPECIALLY gain and master channel!
Suddenly the MIDI pedalboard has little interest.

That said, this is a great amp, very convenient to play at all levels through the power attenuator. The clean sound is very clear, transparent, the crunch channel is very very good (in two seconds with a Telecaster was the sound of Keith Richards), The lead channel is perhaps the worst of the three: it scales well gain , but the sound is a bit messy and a bit passe partout (far mesa boogie on this channel). Personally I use it mostly clear and crunch, and after owning a Laney VC30, a peavey Classic blues a great field marshall tube and HIWATT head, it is much better than them in the definition, accurate, transparent sound with a beautiful grain on the crunch channel. I use it with a 1X12 cabinet house, mounted vintage 30 then Celestion G12H30 of: the G12H30 was a warm and deep sound: ideal if you play classic rock, funk, hard rock (I well said hard rock, not metal).
I repeat group with a drummer who hits too hard: I put 5 watts, with the master bottom: its much warmer than 36 watts master 2 (yes heat lamps is like that it is obtained)
DI side, the red box is a Personal Reference but in test sound and recording, it has the same shortcomings of all other DI with or without HP simulation: it's dry and unpleasant in the upper medium): none such as a good mic for transplanting ...

As mentioned above much more convenient and versatile than city-amps above. I hesitated with the Laney IRT studio head: at her there's no picture (the laney will be better for the metal)
An expensive new, but it's worth it (as it were) hair, the only negative is too partial integration of the south.

rb.muzik's review (This content has been automatically translated from French)" Zi Ultimate Amp!"

Hughes & Kettner TubeMeister 36 Head
5
This amp is very versatile because of its (his) power (s), it goes up to 36w lamp! And has an attenuator (switch on the back) which allows up to 18, 5 or 1w as needed (domestic, rehearsal, concert) and even cut off the speaker output, useful for example to use the integrated DI (of excellent quality, needless to develop for those who know the Red Box) and save at any time ... I used to play particular headset through a table without disturbing the neighbors in the middle of the night, the HP simulation is excellent.

It has three channels: Clean, Crunch and Lead. These last two are sharing the same three band EQ but each with its Master and Gain.

Connection level, we have of course an instrument input, a speaker output 8-16ohms, the famous DI out for recording or connected to the sound system, an effects loop, two footswitch inputs, one (s) activate the reverb and / or the effects loop, the other to change the channel.
It is also regretteable the head delivered in its quality cover is free of footswitch ... to buy more, shame!
Twelve o'clock and 7-pin socket to store and move from one setting to another (the possibilities are endless).

I already have an excellent combo version of 18w (HP 10 ") very portable (only 9.4 kg).
36w version we have the following improvements: a Master / Gain section dedicated to each channel (version 18w Crunch and Lead channel is the share), a MIDI connection and a power of 36w ... where 18w stops, the 36 going very well, ie large scenes / rooms, outdoors where you need live sound of the amp.
For small clubs, I keep the combo.

Three channels therefore possible to pass from a brilliant but wish modular thanks to effective corrections EQ and Gain clean (cranked it "cruncherai" almost ...) to a Crunch equally adaptable to a Lead edge if desired, ideal for a solo.
Any lamp (3x 12AX7 preamp in and 4x EL84 Power) is for me THE sound.
It is extremely versatile even though it sounds terribly for the style of music I prefer to know rather Blues-Rock 60's-70's ... for sure, however, that satisfies the fans of extreme close sounds (although in Lead, the gain in depth ...).

The Reverb is excellent (and not "spring" because it is digital), more present on the clean channel, perfect!

It sounds with simple and double, Fender or Gibson, no problem.

I plug it into a 2x12 DVMark of 16 Ohms (13.5 kg great too) and I do not think finding better, even much more expensive! The price / quality ratio is perfect for me. I can only recommend it. In addition, a colleague guitarist bought immediately after hearing me play with! I do not really need to tell him more ...

I think we can hardly do better, yet I searched but I have not found ...

fed62's review (This content has been automatically translated from French)" awesome!"

Hughes & Kettner TubeMeister 36 Head
5
we are all on the lamps, 4 EL84 and 12AX7 3.
for there is a power attenuator that allows you to vary 36w / 18w / 5w / 1w and 0w which corresponds to the output integrated red box (or how to play quietly without bothering anyone plugging a mixer).
attention to the uneducated, the t ^ te is not THAT 36w, 36w it is at LAMPS! which equates to approximately 70w.
connectivity noon for fans, red box output, effects loop, output hp 8/16 ohms.

who already have a head trilogy, is the use of loud bang simple.il must dwell a little on to find equalize THE son.En Indeed, in Hughes slightest movement of a knob (bass / middle / treble) has much influence over others.
for the manual, I do not know, I do not need to read it.

I play almost all styles of Vigier, lag and fender.
This head fits all momentum.
a flat for the lead channel, choose well your guitar pickups!
I have emg active and DiMarzio Evolution .... it is runny.
Seymour is the best level of output means.
otherwise do not get too much gain.
for reverb, I would have preferred the knob on the front.
I play because after 2 * 12 hp on dedicated test in 1 * 10 and 1 * 12 we realize that it does not do him homage

I tried blackstar, orange, engl ..... is this one who comes out the best in sound and more connectique.de she has a unique look!
a bit expensive ... even qd € 800.
I got in NULOOP (now closed) to 700 €, which is already a bit more reasonable.
I would do this choice without problems, it is the most complete TubeMeister.

Did you find this review helpful?yesno
»
Read the 8 user reviews on the Hughes & Kettner TubeMeister 36 Head »