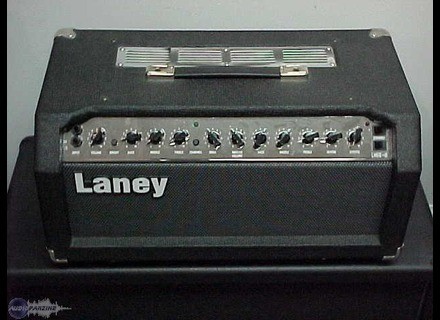 easyphaee's review (This content has been automatically translated from French)

The head is equipped with multiple outputs to connect a subwoofer. The good point here Laney above, you can go out into 4 Ohms, 8 Ohms, 16 Ohms or 2X8 and 2x16 Ohms Ohms in the case of a configuration of two boxes.

Two channels a clear and full, a spring reverb and the ability to insert an effects loop. A three-band equalizer for each channel, with an option "bright" on the clean channel that gives more potatoes in the mediums, is recovered from the attack.

There are two pedals to go with Switch LANEY head a single switch that changes the channel, (one I) and another that handles the reverb in addition to the two channels.

FYI I play on a 4X12 cabinet HH electronic cash that very well.

Configuration is simple enough question, we have therefore reduced the modeling complexity.

The buttons (or knobs):
Clear Channel: Volume, Bass, Mid, High. Not forgetting the little button that I recall Bright boosts the mids.

A reverb knob, and another for the effects loop.

Each knob is graduated from 0 to 10.
It's pretty simple, intuitive connection and volume behind the front.

Do you get a good sound easily: YES only if you like the sound laney: hot.
This amp sounds you plug a guitar and you turn the volume it works!
The rest is the fit.

Bought used I never had the manual in their hands.

I am a singer guitarist and I write. The problem is that I made of rock, metal, pop and electronic music. I needed something so versatile, I always managed to get sounds that stuck to the composition and style.

I play with a Southwestern Stratta, original pickups.
I also have a Hammer with a double DiMarzio, and I also play on an epiphone half cash.

I play without effects, and I am using the reverb ever.

FYI: the band Opeth plays Laney (after they have the PRS that go too).

Let's talk SOUND:
It's hot (it's normal lights) descend very low bass in the clear as distortion. The sharp rise very high (too much for my taste). The mediums are hot too low for my taste.
The distortion obviously reacts to what guitar you plug in, it's going to crunch the disto greasy. The big greasy disto chouilla a lack of precision and returns a lot of harm. The treble is well off but the mediums are low. One could say that it is a head that goes for the metal: very good dug in the medium and many sharp, except that it lacks potato.

for potato:'ll see Engl, (I know it's not the same price).

Having tried several different amps it remains my favorite.
Matter of taste but of course the vox marshall via the combo mesa boogie fender twin and there is no photo is my favorite.
.
I think these amps hyper aggressive, and I wanted something sweet.

This is an amp that has a personality while remaining fairly neutral.

The equalizer is low in my opinion, the medium is very "low-medium". EQ is the kind of beautiful that we turn in any direction the sound moves very little.
Because of the low EQ is that I do 7.

I use it for three years.
What I like most is his warm sound.
What I like least is that the soft EQ not really change the sound.
I spent some time trying other amps as I said above.

The value for money is still amazing. I would do this choice.