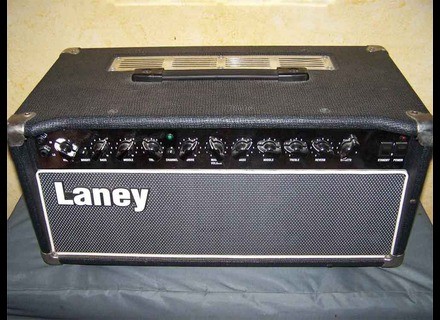 Crusher's review (This content has been automatically translated from French)

Laney LH50R
5
- Tte All tube (when I say everything is all lamps lamps, no transistor and other junk on the audio signal (eg JCM900) except for the op amp effects loop)
- 4 lamps 12AX7 preamp and 2-type power tubes like 6L6
- 2 channels, one clean and one lead foot switchable and facade
- 1 effects loop switchable and adjustable foot
- An integrated reverb

- Configuration issue that is res head well endowed with its 2 channels, its effects loop and reverb, only BMOL, the effects loop is parralle and I would prfr a series of
- Rglage question, not really complicated with EQ per channel plus a bright switch on the light you can easily find a good sound as clear as in lead
- Manual issue, I really wonder if it is useful but hey it has the merit to exist and be complete enough

So the most important chapter for the notice:
"How the beast sounds"
bf so I'll explain that I studied the diagram of the head and I know a lot of the stuff lamps perspective electronics, which will explain my opinion on the sound.

- The channel clear: first case is a clear channel with 3 band EQ (bass, mid, treble), a switch "bright boost" and a rglage gain, no rglage volume. a sound point of view we are dealing with a very clear channel typ "fenderien" which according rglages can rvler very very creamy or snapping, with the switch "bright boost "it goes in crystal clear tones. almost impossible to do so by pushing cruncher or gain within its limits, in a clear channel can play in the registry blues, funk, etc. .... arpges writ very versatile and quality.

- Lead channel: While primarily a lead channel with gain and master volume plus 3 band EQ.
a sound point of view and that is that the study of the head of the scheme reinforces my opinion and I'll tease them from the wrath of dfenseurs lgnde "JCM800".
This channel sounds very "JCM800" to gain more (when I say it is little JCM800 prs 95%).
in fact when we look at the diagram of the head, we are dealing with a clear channel (a few components prs) of fender deluxe reverb and it's lead channel nin liked nor less than one channel JCM800 (with a difference on the EQ and more like if the head is mounted with EL34 instead of 6L6) plus adding an additional stage of gain from the first triode of the channel clear, succinct a JCM800 with vitamins.
short a sound point of view a very versatile head can reach all tyles music trsractive mediator of the attack and guitar volume, in short a head " plug and play, and a 50W power despite its very in your face "and capable of covering a 100W JCM900 and asthma.

except to mention the effects loop and reverb.
for the effects loop with level adjustment, I'd say she deserves to exist as both PARALLEL and not series, I think she eats a little signal.
reverb when it comes to typa "spring" is adjustable in intensity and I think is good quality.

Without hesitating one of the best heads I've tried or owns one that seeks to head a simple, powerful and versatile.
even when it was the right one of the best clear channel I heard about a head and a lead channel certainly very typ "jc800" (and I still say it) but it just will delight seeking such sonnorits while having a great clean channel, which is far from being the case on a JCM800.
more powerful sound and reactivation of the head is an asset.
wholesale head very "ROCK'N'ROLL".
if ctait again ...... without hesitating