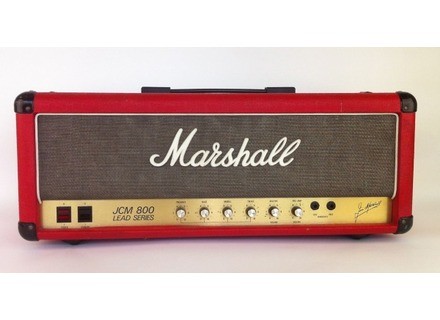 Marshall 2204 JCM800 Master Volume Lead [1981-1989]
4
The Marshall JCM800 50w head is the smaller of the two iconic original single channel 800s. They have been used by many noted rock and metal players both in stick and modded form. It has a very simple layout of controls that includes 2 volumes, bass, middle, treble and presence. Players would sometimes mod these for more gain or effects but the amp in it's stock form is a firebreather, rest assured. It is loaded with EL34s in the power section and puts out 50 watts. Pretty simple, it's worked for the best of the best and that was validation enough for me. No reverb or effects with this one but you can get pedals to that job or just let 'er rip as is!

Getting a good sound out of this rig is simple in some respects, difficult in others. There aren't many controls to work with so if you're looking for super flexibility you won't find it here. The controls have a narrower range than many modern high gainers and that can be difficult to deal with if you are used to modern amps. Also, these are fairly loud amps, and need the volume to get the saturated tones that many expect. The point here is that these aren't really the mega high gain rig, so in that respect it is harder to dial in. However if you have one of these amps in a good loud environment with a band, prepare for some fun.

This amp was THE tone of the eighties, to put it simply. They have that classic Brit sizzle on the top end with a focused mids and nice crunchy lows. Since it's single channel there isn't much to say about it's clean tones but you can get away with use of the guitar volume knob for passable cleans. This amp lives for classic crunchy rock and early metal tones. Used with a Les Paul gets KILLER rhythm sounds and a nice thick lead tone with fat in all the right places... Switching over to a superstrat or Strat thins out the tone but brings that awesome high end sizzle RIGHT to the fore for LA style lead tones galore! These amps also take well to being boosted with a TS9 or BOSS SD1 to bring the gain up to even closer to modern levels. Very cool.

All in all I think this amp is a pretty fantastic way to get those killer eighties tones in the real deal package. Sure it doesn't have the versatility or tweaking functions of some modern rigs, but when you get 'er cranked in the right setting it flat out KILLS. whether you're playing hard rock or more modern stuff with the amp boosted you can't go wrong if you need that slice of British fury. These can be had used for under a grand if you look which is an awesome deal. Many were modded too over time so look for one of them if you desire more gain. Happy hunting!

Marshall 2204 JCM800 Master Volume Lead [1981-1989]
5
The Marshall JCM 800 amplifier it's basically reissues version of one of the greatest amplifiers that Marshall is ever come up with. This is a master volume amplifier that is 50 W of power. So basically you have two power tubes rather than four power tubes. The overall volume is really cut that much coming from 100 W amplifier. But what you do you get it you get a little bit more manageable volume with a slightly bit saggy I feel in the attack of the amplifier.


The look at this amplifier is really classic in itself. They have stayed true to the original look and cosmetic appearance from the originals from the early and late 70s and 80s. I found the reissues of these Marshall JCM 800 amplifiers tend to have a little bit more gain on tap. It could've been the one that I was playing compared to the many JCM 800 that I have played from the 80s but it just seemed to have a little bit more gain and a little bit more usable frequencies without having to modify or use an overdrive boost or pedal of any kind. All around this is a classic amplifier and a great head for any gigging or recording musician.


You can find these heads for right around $1000 or so on the used market which is the best way to go for these. At new you're looking at right around $2200. So just allow someone else to take the hit on the new price and get this one for just about half the price of the new amplifier. That would be my recommendation because this amplifiers a great one and there are so many out there to be had used. This I one of my all time favorite amps that has ever been created. I love it so much that i keep buying them from all era's for their great foundation for hard rock music.
Did you find this review helpful?yesno
»

Marshall 2204 JCM800 Master Volume Lead [1981-1989]
4
The JCM800 is one of the most famous amps Marshall has ever made. The 2204 version was the 50 watt version of the famous 2203 that was used on so many recordings in the 80s. They came in two different versions -- the vertical input and the horizontal input. Unlike the 2203s, there was no difference in filtering between the vertical input and horizontal input models. One thing worth noting is that most of the models that made it over here came with 6550s installed instead of the EL34s that the UK guys had. The 6550s lead to more headroom and a clearer sound, where as the EL34s give that famous crunch and midrange that Marshall is more widely known for.

This is one of those amplifiers where it's hard to get a bad sound. Regardless as to whether you have 6550 or EL34 tubes installed, the amp sounds great no matter where the knobs are. Built like a tank, the amp has proven its reliability over time and is still used today. The knobs are clearly labeled with nearly zero chance of user error. The lack of an effects loop somewhat dates it, and it's probably this amp's biggest flaw. That said, it's also one of the reasons why this amp delivers great tone. The clean design allows the 2204 to show its true sound without having to go through messy loop circuitry that could potentially color the overall characteristics of the amp.

Plugging straight in, you can get an awesome AC/DC style crunch. Boosting the amp with an overdrive pedal and giving it some volume, you can get some of the famous tones that were prevalent during the 80s. Don't expect a super gain monster amp; this was built in the early 80s, after all. It also doesn't have a real tight low end. What it does have is some wonderful Marshall high midrange that cuts through any mix and lets you be heard in a live setting. The amp is fairly unforgiving, so if you're a sloppy player, it'll show.

Overall, this amp is a period piece that is surprisingly relevant to today's music. Despite being built in the early 80s, the amp is still being used in today's recordings, touring on the road with famous musicians and being a foundation for many of the amps built today. It set the bar way back when, and it's still a standard today. However, it is showing its age a little. Being a single channel amp, having no effects loop, having a "looser" low end and lacking gain compared to today's amps, it is definitely not for everyone. Still, I feel it's one of those amps that should be in any serious musician's arsenal. Many famous amp modifiers have extended this amp's life and made them fire breathing monsters. Those looking to fix any "faults" the amp has should look into getting it modded. Those looking to start modding amps should also look at this amp as it's incredibly easy to modify. It's a great starting point for someone looking to gain some electronic knowledge regarding amp circuitry.

custom6665's review (This content has been automatically translated from French)

Sounds perfectly fine with all guitars, its domain is the rock, metal and all types of music that requires the distortion ...

Perfect for rock amp, 50 watts are more than sufficient for all purposes. This model has been re-edited so it is hard to find !!
Did you find this review helpful?yesno
»
Read the 7 user reviews on the Marshall 2204 JCM800 Master Volume Lead [1981-1989] »