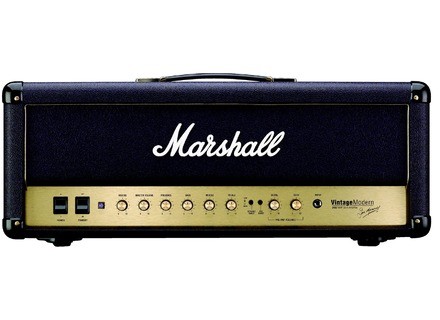 Marshall Vintage Modern 2466H
3
I can honestly say I don't know what Marshall was thinking with this amplifier. From the first look at this amplifier it has a purple tolex cover within some black which is not very appealing cosmetically. The amp is pretty easy to dial-in but I don't really find the tone to be that much of a take on the new modern sounding amps. It could be the Kt 66 output power tubes which I've never been a fan of or it could just be the circuitry itself. This is really an amp that I cannot jive with very easily and even though I did spend a lot of time with it I just couldn't find the sweet spot that highlights my playing within this amplifier.

At the new prices you can find these amplifiers for right around $1600. That's not a bad price for new one but certainly isn't something that I would buy. I can't stress this enough. This is not a modern sounding Marshall amplifier doesn't sound like anything new that is coming out the music scene today. If you needed new modern Marshall tone then I would look towards the JVM Marshall amplifiers or even some of the new boutique amplifier such as Splawn amplification.

Marshall Vintage Modern 2466H
4
Marshall released a few new amplifiers in the past few years, and this is one of them. Like its name, it's a mix between old and new. The amplifier is a single channel amp that features four KT66 power tubes for 100 watts of power, four 12AX7 preamp tubes, two gain pots, a detail knob, a body knob, a mid boost switch, digital reverb and a serial effects loop.

Marshall really crammed a lot into this amplifier, and it shows. Despite it being a single channel amplifier, it's very versatile. The dual gain pots can allow you to dial in more unique and interesting gain tones than a single gain pot. The body and detail knobs can also further help taylor the sound you hear in your head to what's coming out of your speakers. Keep in mind, however, that this isn't a high gain monster like the JVM. This is a more midgain kind of amplifier. If you're looking for higher gain, you'll want to boost this thing with some sort of tubescreamer.

The sounds on the Vintage Modern are pretty good, but they can be a touch hit or miss. For once, the controls on this are somewhat sensitive. It takes some time to dial in a good sound. However, once you do, you'll find it sounds more open and organic than, say, the JVM. For that great 80s metal tone, throw a tubescreamer in front of the amplifier. That'll really kick the thing into overdrive and deliver some absolutely huge tones, especially once you start adding the reverb. The loop on this, despite being a solid state loop, is actually a pretty good loop. It's fairly transparent, and it seems to work with most gear out there.

If you find the JVM to be a bit too compressed or too complex, this is probably one of the amps you're looking for. It's similar to a JCM800 but way more versatile. Keep in mind that it's not exactly the same as the standard Marshall tone thanks to the KT66 tubes, but I find it to be a mix between a modern modded Marshall and a JCM800. It's a really cool amp that, while being a bit touchy with the EQ, is worth checking out.

Marshall Vintage Modern 2466H
5
The Marshall 2466 Vintage Modern head is a 100 watt tube head that was introduced by Marshall to capitalize on the "modified Marshall" craze being spearheaded by guys like Dave Friedman, Rick Onslow, Scott Splawn and many others.The specs are as follows:

It's a very simple amp upon first inspection. The front panel looks a lot like the traditional Marshall JMP/JCM 800 layout, but with a couple major changes. On the far right there is the Body and Detail controls which control your two different gain frequencies, low and high. There is also a Dynamic Range switch which allows you to switch from a lower gain, looser sound to a higher gain sound that is a little bit tighter in my experience. Though it's basically a single channel amp, there is still a lot of flexibility if you use the guitar's volume control and amp's various gain adjusters to hone your sound. There is also an effects loop on the back and a plate reverb on the front panel.

Getting a good tone out of the Marshall Vintage Modern (2466) is really quite easy. I found that was very dynamic and responsive to the type of guitar, type of pickup, picking attack, and use of the volume control. Since there is no "clean" channel on this amp, the best you're going to get is by using a combination of the low range modes, low settings on the body and detail controls and use of your guitar's volume control and picking dynamics. However, most people don't buy Marshall type amps for cleans, myself included, so that's not a huge dealbreaker in my eyes.

Really, the biggest thing about setting up this amp is remembering one key word... "balance." Make sure to set the controls to a happy medium between super high gain and lower gain if you want the best of both worlds. However, if you are looking for a single sound (IE: classic plexi, super high gain 800) just set the amp up to your taste and enjoy the dulcet tones!

I tried this guitar with numerous Les Pauls mainly, as I wanted to get a feel for it when playing seventies and eighties hard rock and see how it would handle tones ala Van Halen, Whitesnake, Dio, et al. Because of this, I spent most of my time in the high dynamic range mode with the body and detail controls to taste (I tended to leave the body control around noon, and the detail was set to about 1 or 2 oclock.) I was using this amp through a Vintage 30 loaded 4x12, which is a great sounding speaker compliment for this amp's tonal range.

The tones I liked best were those higher gain settings that were very similar to the tones of guys like Doug Aldrich or John Sykes. Very full and thick sounding, not too grainy, but with enough of that top end Marshall-y "sizzle" to give the tone that classic burning quality for riffs and leads. For that set of tones, the only amp I've played that was comparable was the Splawn Quick Rod. Everything else Marshall makes falls flat on its face when compared to this amp for raunchy British aggression, in my opinion.

All in all I was very impressed with this amp. I was recommend to try it by a friend of mine who works at the local Marshall dealer. I was very skeptical, since I normally *loathe* new Marshall amplifiers. However, this one was a pleasant surprise! The vintage and modern tones were both there in spades, and I really dug both tones. Though I spent more time with the more modern riff rock tone, I did mess around with the lower range cleaner tones and was impressed with those as well for a smoky blues/classic rock vibe.

For the $1,200 or so price point they hit new, it's an absolute no-brainer to me. They're a great sounding hard rock amp. Users of the classic Marshalls will be happy that it's so similar to their favourite JMP or 800 in terms of controls, and modern users should enjoy the fact that this amp doesn't take endless tweaking to get sounding great. Probably the only new Marshall I would recommend right now is this one. If you want that classic Marshall rock tone, this is the one to get!

Marshall Vintage Modern 2466H
5
100-watt amp with 4 all-tube preamp and 12 AX7 in 4 KT 66 power. basic equation bass treble acute, especially if the particular setting of this amp the body and detail. It acts on the body with the preamp gain for low frequencies and lower midrange, and treble detail and upper midrange. Effects loop channel two low and high fashion.

Configuration using simple but sharp enough, because it takes time to find the right setting. This amp can give all sounds vintage to modern to rock, and they are very very good, but the one fois.Le manual received with the head was that of the JCM 800, a small factory error, but not serious the manual should not be used much.

I play blues rock and hard rock to the former (clapton, bonamassa, ac / dc, guns n'roses, aerosmith ...) I play it with Gibson Les Paul Standard with Seymour Duncan Slash micro and BFG in BB3 P90.Je am a follower of his greasy, and I must say that I am more than satisfied with my head. I said that I use it for my basic sound, and I have a pedalboard quality to inflate my sound (Xotic AC booster, wampler plexidrive, blackstar ht dual overdrive for ...) My basic sound mode is set so low mode "vintage" Plexi typed! the body at 12 h and 15 H detail, I manage my clear sound with the old knobs from scratch, when I'm back, that is the limit of the crunch and the attack did the rest, if I arpeggios a little dirty, I'm going soft, and if instead I want to do well cruncher I press the right hand ... This is the most dynamic amp I've tested .. . I do not use it the way high, so modern, that sounds like a JCM 800 boosted too aggressive for my taste.

I've had it a year, I tested a bunch of amp before buying (and hugues Triamp Ketner, marshall jcm 800, jcm 900, jcm 2000 DSL TSL JVM, Orange AD30, blackstar HT came, peavey classic 50 ...) it is much better than these amps ... for my taste. For the price. I remake that choice without hesitation!!
this amp is a very special and just made for the blues hard rock to pop ... possibly ... but especially for the metal ...

Did you find this review helpful?yesno
»
Read the 6 user reviews on the Marshall Vintage Modern 2466H »