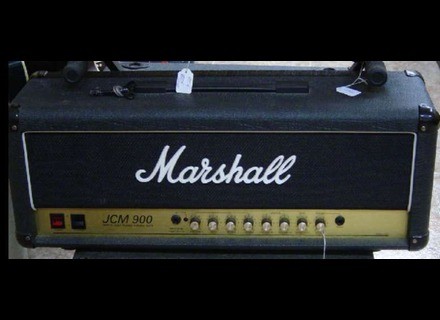 Marshall 2500 SL-X JCM900 Master Volume [1993-1999]
5
I bought this amp at a local music store (String Pros) along with a Laney slanted 4x10 cabinet . The dealer was selling this particular package on consignment for someone and I only paid $550 dollars for the whole package .

All the warmth and power that is a Marshall ... the crystal clearness of the amp even at high gain settings .

The weight of this beast ... the head alone is heavier than my old Fender Blues Blues Deville 2x12 combo .

I've gigged and practised with it for 2 years now and have had no problems with it . It stands up to beer circles and cigarette burns beautifully .

I have no idea what this amp costs new , but I have gotten my $550 worth out of it . Behind putting SRV pickups in my Fender strat , this is the second best musical purchase I have ever made .

This amp just rules, seriously talk about great tone! I play in a Black/Death Metal band and this has provided me with an amazing sound.

Honestly there isnt much about this that I dont like, it has everything that I was looking for in an Amplifier!

This was made to Marshall Perfection, seriously it has taken a beating and still sounds amazing!
After 7 years of owning this, gigging out and tons of use one of the knobs had the gold piece fall off. Other than that this thing has been a tank!!!!

I would gladly purchase more of these, Marshall is a great name, and I didnt realize exactly why until i purchased this. I will be buying more from them in the future!

Maxcreed's review (This content has been automatically translated from French)

The gain has two voicings DIFFERENT!

Well the knobs is not the Marshall super prcis but that's it!

It tears the slip!
If you like big fat rock hard, it hits hard head. Unlike Previous notice, I do not think of any draft, as he must make good tubes too, is not dead with lamps that one can judge the quality of a amp!

It sounds rock'n'roll trs pushed thanks mga the amount of available gain, never from a spin as some hi-gain head (front, for example)!
Otherwise, despite a ton of gain, this amp is just east of the same rock, no compression of a modern oriental metal amp, it is much more ar = short c ' Got a question of!

The sound is like a JCM800 2203, which would boost a little at mut Soldano (APRS to what is said. Certainly, because the tubes are food continues to limit the effects of breath, as the heads of high-end).

Voil good head trs simple and effective mdiums note that the tags are and you have a sound that never gets into screaming, all is well equilibrated with low but not too much prsentent (IDAL for group play), of which mdiums trs well out of the grain can (yum) and acute not too bad (be careful not not push them too however, remains the same when Marshall rcent enough)!

Unlike my confrre below, I find a shame not to use that power Tagus as it sounds beautifully!

APRS is a good single channel so do not complain either that there is no 15 DIFFERENT sounds etc. ... It commme complain about not being able to do heavy metal with a fender hot rod!

Ah yes, little BMOL is a JCM900 so even if it has nothing do with a dual reverb level design, in terms of manufacturing quality is not terrible terrible (like all Marshall from the 90's), then not be afraid to experience one day a failure or a shit!
But hey, put this hand dtail (all of the same trs important), it is a good amp trs!

fendermaiden's review (This content has been automatically translated from French)

It is easy to find a good sound, but dificil in both channels with a common equa.
The gain of the lead is enough to get to the hard FM and old school heavy metal.

The sound is the hard-marshall, less than a JCM800 surment fishing because of the system of diode but it's still chiad Sonq the EU emerge.

I use it in the studio for repeated 4 hours a week, I play old school Thrash, the gain is just the lead.

Otherwise there fishing davant marshall sound anything other than the series transistor of the brand, and it seems less than the JCM800 series.

So I play it 4 hours a week is a good amp trs rock, I like that big a sin as the marshall gives, I like less the scope of equa common, however.

TRS is a good amp for a rock band, hard rock.