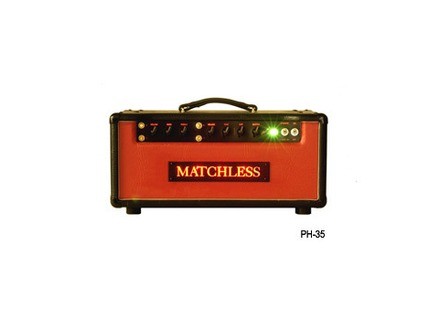 This was released after Bad Cat released their Wild Cat, which appears, at least on paper to be the same design. If you are familiar with the Matchless HC-30, this is the same basic design. If you are not familiar with the HC-30, let me explain. You have two "channels", one on the left and one on the right. You could only access them using an AB box, however I believe they now offer an internal switching option. How this affects the sound, I do not know. The one channel has a volume, bass, and treble knob whereas the second channel only has a volume and a tone knob. The tone knob is a six position switch, each position has different preset equalizations. This can be limiting. There is a global Cut and Master knob. The Master knob can be defeated by putting it out. The Cut knob works like a low pass filter, removing low end. The speaker phase switch is kind of neat. It allows you to reverse the phase of your speakers for a different sound.

If you love the HC-30 but find it a little thin and bright, you need to try this amp. If you find the HC-30 a lot thin and a lot bright, you should probably look somewhere else. Really, what you are getting is a beefier sounding HC-30. It has the same distinctive Matchless HC tone, just with the larger sound of the bigger bottled EL34's that you would expect.

Do not let the 35 watts fool you, this will be louder than some 100 watt heads. And, to achieve the best sound, it needs to be LOUD. With all Matchless amps, the amp thickens up as it is cranked. These amps are designed to be played with a band. Whatever thinness and brightness remains after cranking it allows the amp to cut through and breathe in the mix like few amps do.

If you have never played a Matchless, it's hard to describe the tone. You normally hear "glassy" and "three dimensional", and as true as they are, it doesn't make sense until you play one.

I have owned a few Matchless amps over the years. Matchless amps are not for everyone and I think I'm one of those people. I keep trying anyway. They really do not sound like any other amps I have ever heard and I have heard a lot of them. If they work for your style of playing, you will never want another amp. I thought this amp was sonically the best Matchless I had heard. This is comparing it to an HC-85 and Superchief.

There are limitations to the design, but if the amp works for you, those limitations will be meaningless. They are heavy amps, but again, if it's your sound, it won't matter. Their built quality is amazing and they are nearly works of art.