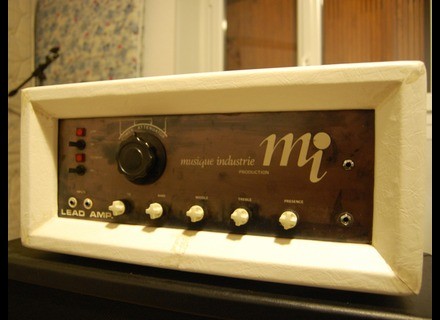 Mi - Musique Industrie MI 60
5
Single-channel all-tube amp
60 W
Two guitar inputs or low power / standby,
Equalization of the simplest bass / mid / treble quite effective presence of a knob that changes a lot depending on what the deal is used as the guitar.
A very large four rotator positions corresponding to powerbrake the amp: just great!
Outputs: two 8 ohm outputs for HP.
No effects loop Preamp output not no slave output, no reverb .... OSEF

So ... How to say ...
Branches and you you play and that's it!
This is obviously a rare ... how could I look for as many years before finding this stuff!
It is sufficient to itself!

It is absolutely not neutral, it has an undeniable character very close to that obtained with the old OR50.
The sound can range from clear to fuzz indomitable but always with great articulation in relation to the attack and the notes played.
Electrically speaking, it is extremely simple but a formidable efficaité.

Couplet with its original speaker, the sound is really very wide. The hp mounted in 2x15 "not a huge performance which keeps a rather smooth with graou ... all is especially the easy with a strat and a telecaster with then it's just monstrous.
The duo is also known to show quite civilized with double coils of my exploring and I must say I love the thickness of what comes out of this marriage a bit against nature.
Add to that a little analog delay and an FL9 and it's magic.
4x12 Celestion V30 on there that's another story .... a lot of bite and grip to the head of more than 40 years ... but why I bought a mesa boogie in fact?
The only complaint a little breath ... but normal!