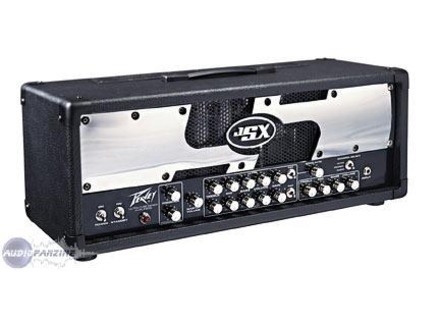 Peavey JSX Head
4
The Peavey JSX is a 120 watt all tube head that was designed in collaboration with famed rock guitarist Joe Satriani and the engineers at Peavey. It is a three channel amplifier with clean, crunch and ultra channels which allows for great versatility overall. Each channel has its own controls for gain, volume and EQ adjustment. There's also a separate section that contains a master volume, an onboard noise gate and additional EQ controls. It's powered by a quad of 6L6s giving a nice variety of different tones.

Getting a good tone out of this rig is pretty easy for sure. Like many other Peavey amps it has a very easy to use and great interface. I particularly like how the controls react to one another. Most Peavey amps don't contain too much of one particular frequency which comes in handy for dialing in a wide variety of pleasing tones. It has a nice low end heft that works well for modern music, balanced and true midrange and a nice sparkly top end that sits very well in a mix by itself or with other musicians.

This amp is a reasonably versatile amp for being touted as a more modern high gain head. The clean channel has a nice and natural sound that is very tight and percussive. It can be a little flat at times but that's a fairly minor issue if the amp is dialed in right. The crunch channel goes for classic and clear hot tossed type rock tones that work well for everything from classic rock to more modern crunch tones. Channel three or ultra goes for those higher octane and more compressed type of tones that have been steadily more popular in modern rock and metal music as of late. This channel can do really extreme rhythm tones well and sustained and high gain lead tones too.

All in all I think the Peavey JSX is a great and surprisingly versatile head. They aren't made any more but you can pick them up for about $700 on average which definitely is a great deal for this amp. If you are looking for a high gain and versatile head for under a grand, give one of these a serious look.
Did you find this review helpful?yesno
»

Peavey JSX Head
5
This is a great amp, 3-channel ultra-versatile and easy to use:

- Clean: very clean and neutral nickel for all styles. Even at high noise level remains clean clean, it does not saturate.
- Crunch: from light bluesy overdrive to his big ROCK! + Switch = fat boost in the midrange.
- Ultra: saturation even further: very BIG sound, accurate, not dirty. you can use this channel to a multitude of sounds for metal: HIGHHIGHHIGH GAIN! + Switch fat.

with a pedal you get well found the tone of the largest hedrix .. bbking ... paul-gilbert Malmsteem .. .. for nothing just black keys amp ^ ^
short j have not found better to do everything

15 people did not find this review helpful

Peavey JSX Head
4
It has a 120w head in EL34 or 6L6 (your choice!) Preamp with 4 lamps. A three equa-band channel with volume, gain switch + a "fat" for crunch and lead channel, a master general, resonance and presence, and finally a noise gate with a single setting, and very very inuitif music. Bug comprehensive, no complaints on the design.

It finds its way quickly among the 3 channel amp. You can adjust this little world in every sense, since a channel volume and master general.

The noise gate is pretty devoid of setting, but very well done, so that even at the bottom, it is very musical, even for a soloist. For extreme settings like "cut" "djent", it could not do so. But as it is not my musical register, I'll let you rely on other review here.

I bought this amp by correspondence, Satch fan of waking up a little late, I did not try to store the time when it was produced.

The clean channel is strange, it is like no other. It is dynamic (highly reactive play and types of microphones, perhaps more than the saturated channels) lens. Not cold, it does not heat the vintage. I do not know what to think of the time, except with a pedal overdrive or distortion, we understand the uniqueness of the channel ... Sounds balanced immediately, as if playing with a lead channel of the amp.

The crunch channel is my favorite. Saturation for light and bluesy, it will not. But with the gain fully ... we are in the classic-rock with a grain a little more modern. It does fuzze ever, it remains clear and articulate. So you will not get any vintage sound of this channel, but it offers a serious alternative to a lead channel, offering more heat and fat. This channel alone is sufficient to lead a game in a directory rock hard rock.

The lead channel is the channel the most modern. If I put the gain crunch to bottom, the gain of the lead channel remains 5/6, and that is enough. Smoother, more right, it seems a little more metal, less rock than the crunch channel. It has the same qualities: always open grain, defined and articulated.

What strikes me about this amp, a general way, it is the precision of sound. No harmonics too (or less), it is really difficult to put a bend beside, whatever the rate-distortion or volume of the amp. We feel that this is a soloist who designed it! You can clearly hear what is being played, whatever happens, even in the lowest registers.

For Me, I cut the resonance, but if you like heavy, this amp can do so without worry. I rarely have such a low reserve on an amp, even on a Powerball!

I do not have much to complain about this amp. If it is it is not one that I needed. I find this amp overall more "metal" (the heavy stuff to the extreme candy today) that rock, and despite the extraordinary precision of sound, I would like to find out more amps, I do not grain that I had in mind the commander.

The only real downside of this head is its weight. But already, remove the metal panels of the front a bit lighter overall load. It is less good, but if you move with the head, lower back you say thank you!

In short, although I finally pass my way, I confirm that I have read here on the quality of the amp, having played on various Marshall (plexi 69 at the Silver Jubilee up my trusty 800), Rivera , Engl, Brunetti, The Valve, Mesa, Fender, etc.. There is always a fear with Peavey because of their inputs ranges (also very good value for money) and we forget that the brand has still provided the first model siganture Van Halen, Satriani then, the rather demanding guy!

krma's review (This content has been automatically translated from French)

Peavey JSX Head
5
I totally agree with other opinions dj posts. It is clear that the channel IMMEDIATE directed my choice to the JSX, not too typ amazing dynamic, it becomes almost superfluous to change both the micro and flatterers prcis rglages are, even with a dble humbucker "acute". As for the Distortion channel ... a killing. The game on mdiums covers virtually the whole range of so-called modern sound, still retain the typical small grain that we all admire in Mister Satch (even if it does not always apparent distortion of the JSX but hey, even if it sometimes goes by the Marshall before attacking the clean channel of the JSX (which I also tried to output from pramp JMP-1), the diffrence is I was so minimal that it seems superfluous.
1580 euros, if you find more complete and compelling for less, let me know

Simpler, you die but you're not crippled.

Did you find this review helpful?yesno
»
Read the 7 user reviews on the Peavey JSX Head »

Published on 01/15/09
Peavey has announved that the Peavey/Joe Satriani Press Conference, scheduled for Friday at 1 p.m. during the NAMM convention, has been cancelled.