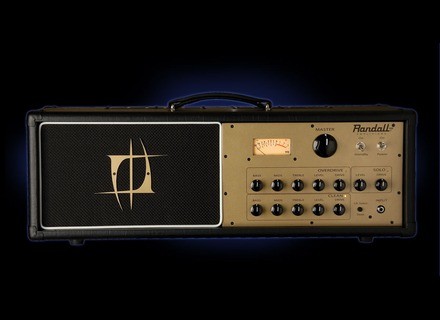 Randall NB King 100
3
Randall in connection with Peter King and Nuno Bettencourt set out to capture a new amp for Nuno. This is not an amp that goes back to the tones of Portnograffitti days or even Extreme 1, but more of a newer sound. This amp has a very distinct look to it. It doesn't look like anything that you have ever seen before. All of the control are on the right side of the amp instead of going from one side to the other. In addition to that You have a giant master volume knob that is about three times the size of the normal control knobs.

The tone of this amp is nothing spectacular. It sound like a Marshall with a Rat pedal in front of it. I find the tone of it not that pleasant to hear. The gain is thick and up front but it just lacks something that is not explainable. When You hear it there is a tonal quality that just sounds strange to my ears.

You basically get a clean channel and a distortion channel and the optional solo boost. You have almost three channels because the solo boost has a gain control knob so you can set that where you want and it's like having a shared EQ third channel. This is an ok amp for the price but its not anything that jumps out at you. The VU meter that shows you power and voltage is a nice touch on the front of the amp. I have always like that on the front of electronics and thought that would be cool to see on a guitar amplifier and now it has happened.

At new these amps come in right at around $1500. Nt a bad price for this amp but not the best amp i the world either. For this price you could own a used Splawn Quickrod which is head and shoulders tone wise above this amp. You won't sound like Nuno with this amp. If you want to sound like him on Extreme's second album then go get an ADA MP1. If you want to sound like him on the first album buy a used Marshall JCM800 and slap a Boss SD-1 in front or a Rat distortion pedal.