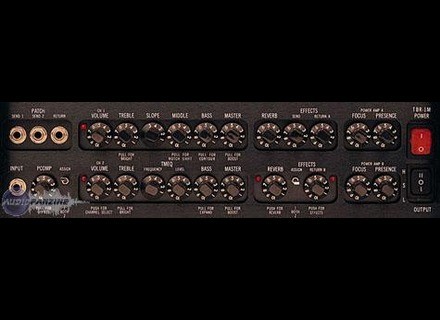 there should be at least one in my collection of amps and besides that this thing is(with or without the name)owe-inspiring(tell you later why).paid 600 australian dollars for it(sweeeet)!!!

I'm sure that senor Rivera wanted to put the end to all new models of amplifiers anywere.he must've gotten sick of all marketing schemes that were aimed at us(buyers)in order to make us want to buy some more amps so he came up with THE MOTHER OF ALL AMPS so no child anywhere in the world would ever have to go through the anguish of choosing what kind of amp it wanted to play.reason i'm saying this is the fact that this head will do almost anything you can think of(soundwise anyway).Fender,Marshall,Hiwatt,Orange,Vox,Ampeg(?),Boogie(?)...you name a sound and it's in there somewhere.Pentode or triode mode,stereo(true stereo with 2 amps),reverb,couple of sends,variable speaker impedance switches, variable output switch(half the power and more combinations that i just have no time mentioning)...you crank this thing up and it ooozes thick(or thin if that's the way you like it)sounds with sustain 'till tommorrow (clean or dirty).and to think that this is actually tamer of the 2 tbr models.makes you wonder how wild is the high gain model. trust me the heaviest of heavies would have plenty of distortion with this,as rivera puts it,more classic distortion sounds.what the hell does the high gain do? makes you bleed from your ears? it is a disneyland of bloody sounds and combinations but (for most people anyway)this is what brings us to the next section of the review.

(read this in shaky voice)the problem with todays youth is that they don't have patience while figuring out stuff.(OK! stop now!)this is one hell of a complicated amp with tons of pots and it can get pretty messy and even though you know the sound is somewhere around the corner it sometimes can elude you for a long time because as soon as you touch one button,then another and another you're gone somewhere away from it and, unless you actually wrote down some of the settings, chances of finding that interesting(or lets say Marshall for example)sound are pretty slim. in other words you actually have to know what is the structure of the sound that you seek(as opposed to turning the preamp to 10 and all the tone pots to 12o'clock and hoping for the best, while adjusting the master).many was the times when i whished that rivera would post some sample combinations on their site(instant stevie or gibbo...you get the jist)and i'm sure i'm not the only one(if i had a dollar for every time somebody told me they thought rivera was overated 'cose they couldn't dial in a good sound on the amp,i'd have at least couple of dollars now). i guess the problem is that we really are used to having 4 buttons to play with and everything else is throwing sonic pearls to swines. our loss, i guess. add+accountant man wins-we will be buying others,more simple ones.

this thing is (at least)25 kg heavy and it's built for a rack system(all metal). because of that weight i tend to use it mostly at home but even there i knocked it around the coridors a little and it seemed fine.however you knock any of those pots of and there'll be some bills to pay.not that the parts are rare or anything but being such a complexed amp by the time techie opens it up and dismantels all the layers of it (at the rate of 70 $ an hour)...you figure it out.

dispite of all the complexity and weight which are downers in most peoples eyes, once you're familiar with this head(which means that you've spend couple of evenings wheeping into it after you weren't able to get anything good to came out of it and you thought you've spend a respectable amount of money on a valve radio shack experiment)it will open your eyes as to how limited other amps of yours(and quite frankly,you too) are, and that's when you'll start delving propertly into the secret of the sounds. maybe that will take you from the stage of trying to pick as many notes in as short posible time to one where you'll actually start playing with some testicles(webmaster said we were not to use rude language)and i mean that-with guitar in your hands.