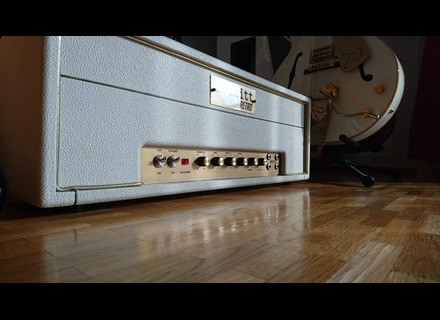 This is a 50w head, reissue of the plexi JMP 50w, wants himself to be as near as possible to the original. The onboard tubes are EL34 JJ Tesla, in A-grade, specially sorted and paired by an American specialist. The box is made in birch multiply, and is hand covered by the manufacturer. The board is a PTP type, and the transformers are custom versions of Heybdboer (I will re-confirm that. Not completely sure anymore).

This model has two options from the three possible. The white tolex, because it's beautiful. The PPIMV master on the back. And it would have been possible, to have an effect loop added, and a switch to select region voltage.

The appearance of the beast is classic and does not surprise in good nor in bad. The color "white vintage" appears a little greenish in the sun, where I expected a little yellowish. But it goes well with my Vintage Sound Amp Deluxe Reverb, which is also in these tones.

The assembling quality offers no grounds for criticism; If, maybe the knobs, which seem to me to be identical to those used on the Marshall plexis of that time (with a little friction in their rotation). Similarly, I will note that tolex has some marks related to incontinent american flies. But the problem is already settled.

The order was simple, given the lack of options. Lets note, however, that I was very surprised by the manner of being of Mr. Heidbreeder; Who, by his figures of phrases in his writings, reminded me of a scammer from the Ivory Coast. It's a thing that has turfed me all along our contacts (did I gave away a dollar to a scammer, yes ... no?).

One thing that disappointed me was the fact that I wanted to make my second transfer, the final one, by the bank. It was very important, because I wanted to hide the final price of the amp to my fiancee ; Who would certainly have blamed me for investing money during a marriage preparation. And I had received confirmation from Mr. Heidbreeder that this was in order. And then ... no. Finally, 4 months later, at the time of doing the last payment, no more bank account. Leaving me with a pre-paid amount and the obligation to open a Paypal account. -&gt; SHIT! I hate Paypal and, more commonly, anything that attracts or surrounds EBay. I still prefer to pay the russian mafia, than to give 10 cents to EBay ... and then, I found myself in a situation where I had to rape myself, and open a Paypal account ... extremely disappointed on this point.

We will also note that the delivery time was scheduled to be four months after the payment. And was rather close to 7 months. But be aware that this is a habit of all small US welder companies. Imho, as soon as the products are a bit well made and of higher quality, the deadlines are almost never respected. Whatever you order at Fargen, VSA, Sota ... I always had the product delivered with at least 2 to 3 months late. It must be an "american thing".

This head is EXTREMELY flexible to use. The clean is very good, both for a marshall inspired amp, and also compared to a wider range of amps. The dynamic is extreme with this head, and you can play in clean and crunch with the same setting, and just set the levels with the strength of the wrist. This is a constant thing on very good heads, but it is clearly present here in greater quantity than elsewhere (1987X included).

Not possessing the original vintage version of this exact head, I cannot express myself definitively on what I am going to write; But I own the 19959SLP of 1974 ... and the sound of the Rockitt seems resolutely more vintage, but also, more flexible in the intonations that you will be able to reach. On these "old" heads, there are two sets of inputs (low and high power) and two different voicings per column of inputs. The two knobs that define the gain of each of those columns, have another effect on the sound. The column on the left is more gritty and cool, and the column on the right and so much more boxy and hot, which allows to define EXACTLY how the sound you want to creat will be created. We can therefore patch the two columns between them, going back through one entrance or the other; And each of these big messes, will offer other sounds. And it is amazing. Because we touch as much Hendrix, Steppenwolf, ZZ-Top or Creedence and Clearwater sounds, as things already already on the more modern side of the gain section (Kiss, ACDC, 70's rock). We can attack sweet things, rich in introspection, or, on the contrary, go in a fulminant drive, with all the horses launched. The amp is a chameleon, perfectly anchored in its time period. That, even the old 1959SLP does not offer it to me. It is more limited in its uses.

Let us note the presence of a complete equalization section "low, medium, high," which has a rather limited effectiveness, but still audible, and a presence knob, rather effective.

The last really strong point of the head comes from the back pannel. The Master PPIMV, and its small rotary knob, are of extraordinary efficiency. Allowing this amp to play in a flat, with a better sound and dynamic ability, than what a Marshall JTM1 Anniversary would offer. Naturally, the more we reduce the sound, the more we influence the dynamics, which then becomes, even then, very honorable. And once you hit 1/3 at the master (repeat volume), the head begins to unveil more of its superb capacities. But to play in groups, live, or at home, this head does the job.


End statement :
The Rockitt Retro 50 is an excellent head, which will delight fans of the "Marshall sound". He will be a good partner for those searching a good sunday practice amp for the old sounds we love, or as tool of creation, for a working artist. So it suits both amateurs and pros. You will just have to find one; Which should not be easy in Europe. In France, with the system of import and VAT ; the price of this amp is very close to the Marshall 1974X, which does not have a master volume, which is not welded in point to point, and which does not have colorful tolex to offer. But in Switzerland, where VAT is at 8% and where the cost of the product is not calculated in the same way (and where Marshalls are more expensive than anywhere else); There, this head becomes a real alternative.
Did you find this review helpful?yesno
»