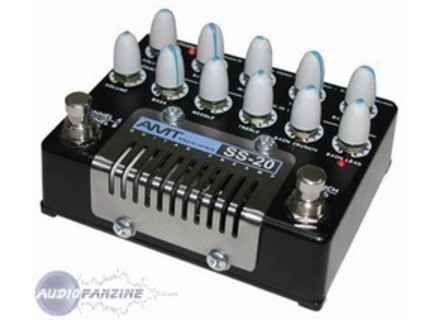 Amt Electronics SS-20 Guitar Preamp
5
This is a great little unit that will get you a solid rock guitar amp tone in a pint size box. Not to mention how portable this thing it is fantastic. It is very smooth and rich in its tone that makes notes just jump off your guitar neck.

The thing that is great is that it sounds extremely natural and articulates the notes very well. If you are on a gig where you don't have a amp or you have to use the house amp which is usually garbage then I would bring this thing along and plug straight into the mixing console. It is portable and on a last minute notice you can grab it throw it is your bag and head off to the gig. Another operation is that many players have to travel to gigs and don't have the comfort or lack there of to carry their half stacks and this is something that will do you right in a jam.

This unit is such a great tool for gigging musicians who needs something portable and handy that can go anywhere and even on a plane. I know where guitarists have to rent a Marshall head or something where they make appearance and there is no need for that if you have a pocket amp like this one.

At new they come at around $350 which is great for a little preamp. You could probably find it cheaper on ebay or something. Great buy for the money.

gillou666's review (This content has been automatically translated from French)

Properly hallucinating bonus an effects loop without background noise, speaker simulator poustouflant the best I've heard Until now hard in a killing.
They do not bump with mittens I can guarantee you, even these types -40 l are particularly dous.
but how have they done ??? two size cigarette packs (thickness width) SHEER MADNESS !!!!. concrete and the craft SHEER MADNESS ...
Did you find this review helpful?yesno
»

bromax's review (This content has been automatically translated from French)

Amt Electronics SS-20 Guitar Preamp
5
3-channel guitar preamp (light crunch and lead), tube (Sovtek 12AX7 WA on mine). Equalisation standard (bass, middle, trebble) separate clean and crunch / lead. A small switch to select three types of gain curves for the crunch (in the ear is not super obvious ...); each channel has its own gain control.
The connector has an input, an effects loop (send / return), an output amplifier and a simulation output with HP to directly attack a strip (of a quality to die for, I never heard a something like that out of my monitor speakers !!!). In fact we are left with the equivalent of an amp head without power section to plug directly into the console! Except that it weighs about 200g and is the size of a wallet! (Compared to 23kg rectify my head!)
Power is separated and supplied (12V, 1.25 A) (for the curious), no battery compartment.
Fun for a little sticker "made in west siberia" stuck on the back! It&#39;s not every day!

No on / off: one branch and it turns; settings ultra simple, you turn, you play, you play, you play ... it&#39;s a treat just how this little box makes you want to never stop . It rings with almost all settings, connected to an amp or console (still staying smart: gain in depth and all zero except acute screaming ... it&#39;s weird right?).
The manual does not much ...

Well here is the huge slap in enormous Bought without trying it (trusting extracts found on the web) I was nervous ... That said it was the last of the stores with the seller told me she was going like hot cakes ... so no worries resale to predict.
The guitar is a PRS Dave Navarro with two doubles splittable.
The sound clear enough right, precise but very warm, very reactive, we feel the lamp every time the pick. Good compression natural treble equalization sensitive enough but does wonders (see below). Overall it is ideal for heavy funk, jazz, country, type crystalline arpeggios. At the very end of the race of the gain (between 8 and 10) are emerging a little crunch that is super friendly module in the attack and brings a nice warmth to the sound.
the crunch: the 3 modes of gain curve are still rather obscure to me but who cares, we get a super smooth and silky crunch at will, it drools, it screams, it drips and yet all your notes and all your intentions are quite distinct: a treat!
lead sound: there I no words to describe this thing is sheer madness! A gain incredible, big compression, bass most accurate from beyond the grave, and carved a sharp edge and a medium that You balladent a chainsaw as well Pantera (in much warmer) to the impact his mortal seriously it takes the guts! Harmonics fly from everywhere, just waiting Feedback from ... (you got a bit of slime there, oh yes thank you!)
equalization: it is super accurate and efficient frequency bands affected are special: the work of hyper acute and severe acute hyper-serious, the medium work the whole body of your sound: it is hyper efficient and it allows sounds to be very roots is ultra modern broadband
edit: actually I just realize that the equation works like a filter: you got to 0 is not at all! I had never seen before is super powerful!
PS: the best is that all the configuration silence is royal, not a pet of breath even lead to gain ground (include owners of 5150)

I use it for 4 days but I feel that I will not part with it anytime soon (for I began to look against my head Dual Rectifier funny !!!).
Likes:
Format-foot (fits in a pocket)
The 3-channel, none of which has been neglected (they have not staked everything on the saturation, the light is of equal quality)
-Equalization of madness
Output-offset that ensures (I never heard anything like it): the coup in concert can not repeat or spell the pedal board (exit head and cabinet backs and MIDI which is plenty of room) .. .
-Build quality
Effect-loop quality

I like least: ok let&#39;s go for nit-picking
- The buttons are super close together (given the normal format) and turn very easily hit with my big sausage fingers I change often another knob as described ... and I discovered his other great ... not so serious fact
- They should have it out before
- If they let me go (hard to imagine given the construction type panzer Siberian) I make up a severe depression that I found another! (I will take a second backup)

The price ... € 240 for sure that in times of crisis it&#39;s a little evil, but because it is so unbelievable that it will sell € 700 anyway! So it&#39;s cheap for the sound it makes and the service it provides.
Of course I would do this choice with his eyes closed.
If you find a solution anywhere portable preamp do the impasse on the SS20! I have not compared with the Blackstar HT Dual (one EQ and 2 channels for € 180) or T Rex Spin Doctor (740 € and poorly adapted to the metal) ... but I am filled with filled.

Did you find this review helpful?yesno
»
Read the 11 user reviews on the Amt Electronics SS-20 Guitar Preamp »