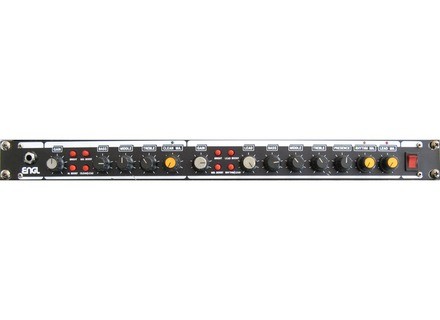 ENGL E520 Tube Preamp
3 channel tube Pre-amp tone=8 plenty of gain on Ch 3=9 Coll feature you can use headphone out as a 1watt stereo amp to drive external speakers=6 only glitch I've ran in to you CANNOt plugh a reg 5-pin or 7-pin midi cable into MIDI In I have been told by LA repair center that he thinks it requires a special cable from engl have gotten a response back from them yet so be aware even though it has MIDI jacks it's not quite that simple=0 hopefully I can figure it out and give an update later!=5

I love that it's light portable Good Recto Sound LOve the Headphone AMP Good value esp for what I paid$400 Wish it would take standard MIDI cable! I don't know if I'd do it again because of weird MIDI In jack as it doesn't fit easily into my rig without hunting down a special cable

hiopoulatos's review (This content has been automatically translated from French)

Yes the config is simple and the sound is excellent on all 3 channels.
In reviewing the three channels, one can go to a beautiful clear sound, responding well to the nuances, the metal to a very aggressive, which really takes guts.
At all good.

I use a Rocktron Velocity power amp 150 of baffle 112 in ENGL V30.
For really cheap, I have a really big sound, but I can also play in most soft records (rock, funk ...) no worries.

The only downside is the headphones completely hp *: the sound does absolutely nothing to the headphone. On the other hand, if it is to play as much to buy a headphone pod ...

I use it for three weeks, I've done 3 repeats and I do not regret my purchase. A very active preamp. I was impressed and I can not imagine what it will when I buy an all-tube power amp.
Very satisfied with my purchase.
I admit to having trouble understanding the previous opinion: maybe did it fall on a bad run or lamps to throw good?