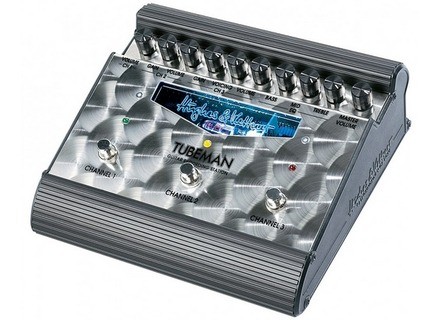 Hughes & Kettner Tubeman MKII
5
I've purchased the unit through Internet from a German distributor of Hughes and Kettner Products /Musik Service Gmbh/. Because Hughes & Kettner are German based company I decided that it will be the cheapest way, besides that I live in Europe and the shipping costs are kept to the minimum as well. The total cost, including shipping and custom duties was around 320$.
Before that I've tried Tubeman as a live preamp directly plugged into a PA system in a guitar shop in Denmark. The tone and feeling was great. And as soon as I came back home I ordered it /Denmark is not the country where you can buy gear cheap/.

This unit has 3 switchable channels. Clean, Crunch and Lead, all of them sharing common EQ with Bass, Mid and Treble controls. Lead channel has a voicing control, which realy changes the tone of the preamp from mild lead to "blow-the-windows" heavy lead sounds, but preserving the character of the guitar.
Clean channel is great - it has awesome dynamics, which can be controlled just with the picking technique /just like with a real amp/. Max the guitar volume and it breaks-up nicely, back it a little and it is godly clean.
Crunch channel on the other side is aimed towards blues,classic rock. It is very full and fat sounding without "over-the-top" gain. Just enough to get early Santana or AC/DC tone, depending on how you set it.
Lead channel is the one that should be used for heavy leads. It doesnt has the massive amount of gain that Messa Triaxis provides, but has just enough to pill the paint off the wall. As a huge Extreme/Nuno Bettencourt fen I can get almost every Extreme sound with Tubeman and my Washburn Nuno Bettencourt signature guitar.

Not noisy at all, except on the Lead Channel, which is easily removable by any Noise Suppresor.


It would be nice if it had some MIDI implementation there. For switching the channels, enabling/dissabling the EQ.

Solid German Craftsmanship- all shiny sturdy metal. It is built to last forever. I own it from a year and it doesnt have a scratch.

Overall this is great,great,great recording preamp. It is primarily designed for a recording preamp and there is where its best. But if you want three big sounding amps in 10"x10"x5" box live on stage, with no doubt it can be used as a very professional sounding unit.

Hughes & Kettner Tubeman MKII
5
The Hughes & Kettner Tubeman II is a guitar preamplifier and 'recording station.' It is designed to be an all in one solution for recording guitarists. The Tubeman is of course as the name states driven by all tube power and consists of three separate channels. The unit has 1/4" connections of all types and isn't rack mountable.

Using the Hughes & Kettner Tubeman II isn't too hard, but it will take a little bit of practice to learn where everything is and what everything does. For setting controls, the first channel only has a knob for volume, while the second and third channels are a bit more in depth. The second channel has parameters for gain and volume and the third has those for gain, voicing, and volume. The Tubeman II also boasts a three band equalizer for all of the channels and a master volume knob. Each of the channels can be engaged with a separate foot switch. I don't think you need a manual for this one, but can't speak to it's make up since I haven't seen one myself.

The overall sound of the Hughes & Kettner Tubeman II is pretty unbelievable. In addition to the basic features I discussed before, it also has amp modeling, so it really is an all in one guitar recording station. However, it can of course be used with an external amp or speaker cabinet, which is what I've mostly done with it. This will definitely work perfectly fine on its own for recording direct as well, as it has a great inherent tone that sounds full all across the board and offers up a whole lot of versatility.

I'm a huge fan of the gear manufactured by Hughes & Kettner, as they offer up only high quality products, and the Tubeman II is no different. While it won't be a cheap purchase, it is certainly a worthwhile one for those looking for an all in one guitar recording port. This definitely doesn't have the cheap sound that you'll get with something like the Line 6 POD, rather it offers up clarity and fullness without needing an external amplifier, and who wouldn't like that!

Very easy to adjust.
A manual? Y has t he REALLY need?
J uses this pedal essentielement for clear and crunch.

Sound in mind h & k.
A beautiful clear, a crunch to cry when the saturation., I like, but do not over ride the gain (although nice on a small bowl).
Its very hot.
The equalization is very effective and can help sculpt your sound to perfection.
Plugged into a Marshall Vintage Modern, it allows me to have several sounds directly to the foot.
A transistor, it adds heat.
The recording output is very good.
I double D also some microphone jack with this case for very pro Reg.

Not below a lamp pedal mesa (actually all depends on the desired sounds).
D also just see how long h & k sells this pedal to its catalog.

I have long hesitated with blackstar ht, but I do not regret my choice.
For "small concerts," I take it Boitie + reverb of a pedal and you're done and it's still much better quality than the small lamps amps, plus the fact that this very compact night, I love it!
You can do anything with this pedal, but it is anyway VESTED to rock and rock that spot, see the metal (but that is not my trip.)

Rodito's review (This content has been automatically translated from French)" Practice"

Hughes & Kettner Tubeman MKII
5
Preamp
1 instrument input
2 outputs: amp or PA
3 channels: clean, crunch and lead
1 Joint EQ (bass, mid and treble)
independent volume for each channel + master volume common
Micro format is very interesting and practical
It is both transportable in a backpack and is used as a pedal, the chassis and the knobs seem solid.

The manual does not say much, but at the same time the use is extremely simple, with knobs rather sensitive. One can easily find his sound.
It was unfortunate that the input and outputs are reversed with respect to any matter not pedal, which can make the connection, but nothing major.
The same for the common equalizer, there is a tradeoff between the different channels.
As a preamp, the Tubeman could have an effects loop.

This is my first toy lamp, I can not compare it with other things (except that I have ever tried in shop), and there is a huge difference. I have a Gibson explore with emg pickups and an amp peavey envoy 110. The difference is obvious between before and after. The volume was multiplied by 4, now I can push my sound much more. To play with me, my two volumes are almost at minimum and it is clearly sufficient. I look forward to push a little more.
I find the sound great, especially the clean channel has a very beautiful clear sound, especially used with a chorus. The crunch is very nice and well being pushed, although I do not use it too. The lead should compete with any distortion pedal hi-gain transistor, the sound is solid, consistent and powerful, and there is a voicing knob more gain and volume that can push a little more in aggressiveness, but we quickly found, however short to play death. I play a lot of thrash and I found to my liking, but I have liked to have a little more. However, I think it is perfect for prog metal, speed, symphonic.
Its great advantage is the versatility and sound quality.

For a very reasonable price, this is a very good option for those who want to spend transistor lamp. The sound quality and versatility really worth it for a modest cost.

This is one that is clearly oriented studio unit, and it is a shame because its ergonomics lent itself to be used live. This does not mean it can not be used live, but it does not seem very practical for this purpose. He could also have a button to turn rather than connect the power supply directly.
However, it is quite portable and does not take place. It lands on the ground directly in front and active.
So despite some flaws, I am quite satisfied. I find the lead a little short in aggression level but it remains powerful and massive and this is largely offset by its versatility.

Did you find this review helpful?yesno
»
Read the 12 user reviews on the Hughes & Kettner Tubeman MKII »