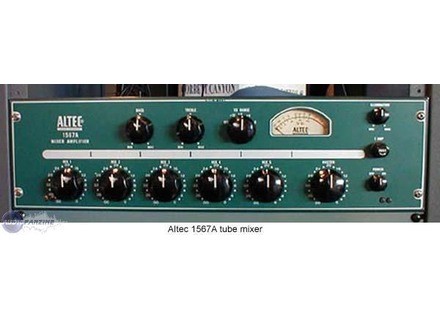 Altec Lansing 1567A
4
The Altec Lansing 1567A is a vintage tube preamplifier. It's a five to one channel mixing amplifier. We've got it in the studio where I work, and most of the time it gets used to get a sort of vintage, garage band type of sound. It is a rackmountable piece of gear and will take up three spaces in a traditional style rack casing.

There isn't all that much to know about using the Altec Lansing 1567A, as it's generally pretty simple. Each of the five channels have their own leveling knobs, and then there is a master volume knob as well. There's also both treble and bass equalization knobs, and a knob for setting the VU range, which goes from 0 to +12. If you want to access the guts of the 1567A, it's pretty easy as the whole front panel can be titled down. I doubt you'd be able to find a manual for the 1567A since it's so old.

The sound of the Altec Lansing 1567A is definitely a vintage sounding one! It's got a lot of grit and bottom end to it, making it great for recording a little drum sub mix or something similar to it. If you're looking for a clean tube preamp, this isn't going to be it, but if you're looking on the opposite ends of things and want something with a really warm and thick tube sound, the 1567A will be right up you're ally. It's definitely a little strange that it's a five to one channel mixer, but if you use it in the right situations, this can definitely work to your advantage...

I don't know that the Altec Lansing 1567A is for everyone, but when it works, there's no denying that it works. It isn't the type of thing that you'd want to use on an everyday basis, but for getting a vintage tube kind of sound, it's awesome. It's definitely most useful in a professional studio where you'd want to have every type of sound possible on hand, just in case a client is looking for it. I don't think you'll find too many of these around anymore since this is from the 1950's, but those who do have it around should definitely enjoy using it.

Altec Lansing 1567A
4
This is a tube pre-amp, one of the best products of its era. The only way this could be hooked up to a modern DAW would be through the patch bay, as those are the only connections. There aren't any effects on this pre-amp, just a simply great tube sound. It is a rackable pre-amp but it works best as part of a console or in a similar position.

The impedance levels for this pre-amp are pretty high, so make sure you know how to solve this problem before you blow something up! Other than that, it's not a difficult pre-amp to use, it has your basic functions. It has an input gain knob, an output knob, and a 3 band EQ. It isn't really the most complex piece of equipment around. You will never find a manual for one of these machines, considering that the machines themselves are almost impossible to find nowadays.

This being an old pre-amp, it is really not transparent at all. I happen to think that this is a positive, rather than negative, trait. The color that this pre adds to vocals is pretty much unparalleled. It grew out of an era where there really wasn't any such thing as a transparent pre-amp. This is part of the reason that rock and roll records used to sound much better. That's really where the best use of these pre-amps comes from. You certainly wouldn't use these on a classical recording, or for foley recording. While the pre is limited in it's applications, there really aren't many better pre's for getting that warm, vintage vocal sound (Think Beatles, Buddy Holly, Elvis). Considering that I love this sound passionately, I am thrilled that the studio I work at owns one of these.

These are probably only worth getting if you are fanatical about vintage tones, like I am. I think that in general, most people wouldn't want something so expensive that is so limited in its application. I'm usually the same way, however, with a good vocal mic, you can't really top the sound that you can get with the combo. It's so warm and dynamic, and even when the instrument clips it still sounds OK. I think that most old-school engineers would find much to love here. Just be careful again with the impedance.