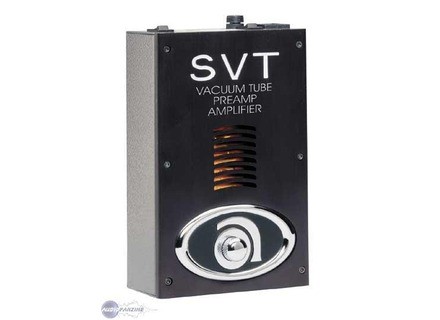 labricox's review (This content has been automatically translated from French)

Gnreux in dimensions, almost as big a di avalon.
- Between combo XLR / Jack between the pramp
Switch pad and phase reversal for between pramp
- An instrument between thru jack that fits with the APRS pramp (therefore no effect lamp) this circuit also has a pad
- A kind XLR with a switch pad ... still
A switch to start and one for the 48V
For the settings is simple ... rgler a knob to gain.
Sight-metre.c is not top
on the other hand, it's tough but can not find cl adquate to see the guts of the monster!

Use, nothing complicated ...
it is
- A basic DI (without lamp)
- Pramp a lamp (which can serve as a splitter)
The big inconvnient is that there is no meter or LED clipping impossible to make a level other than by ear or meter console that connects after.
Against by having an output pad allows you to enter the fort preamp (to saturate the lamp) without an output level unusable.

When they turn on there is just one orange LED that cre the illusion that heat lamps :-(

Not done too much testing.
With an SM58, saw no difference with a console between the preamp end of my costs.
With Rhodes danc registration, saturation of the lamp is not trs ca saturates when music really.
But I still have to test with a guitar and voice live on a good System to give my opinion DEFINITIONS. It is for this use that I bought

It's been barely two weeks that I have, but I wanted to give my first impressions.
I love the look maous tough, but would be even to think it led to a crtage ...
Even when it is expensive for what it is! But this will be my personal color mixes live.
I personally never tried avalon DI.
In gnral I use DI BSS or scv and for pramp, avalon SP737, SMpro TB202, DBX 786, DBX 386.
To know if I would do the same choice .... I expect to hear more before I decide dtails.
I'm back ...
since he served a lot.
For the bass is awesome! we realize the serious rendering when you make a comparison.
A Hammond organ, I rcupr the low end of hallucinatory way.
The frequency band is very well restored.
Compartment or a BSS Klark is like a MP3 and WAV ...