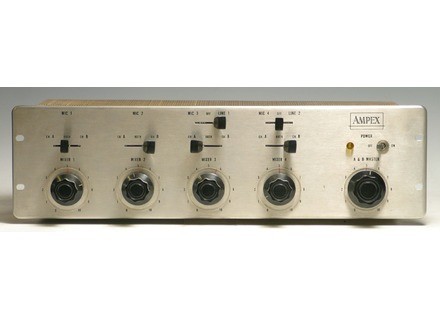 All user reviews for the Ampex MX-10

Ampex MX-10
4
The Ampex MX-10 is a vintage analog preamplifier/summing mixer. It's got six separate channels that are bused down to a single channel. I don't really know the types of connections that it has since the one that I've used is already hooked up to the patch bay at the studio where I work. This is a tube based piece of gear, and we often only use a single channel of it like a traditional preamplifier. It is rack mountable and will take up two spaces in a rack casing.

There isn't much that you need to know about using the Ampex MX-10, as it's simple and easy to understand. There are a series of knobs (six of them in total) for controlling the levels of each of the mic inputs, as well as a master volume knob as well. There are also switches to choose with of the inputs you want to use at any given time. A manual would surely be hard to find for the MX-10...

The sound of the Ampex MX-10 is definitely the type that you would define as vintage, as it's got a gritty sort of feel to it that is certainly lacking some clarity. We use it at the studio where I work for getting this exact type of sound. We don't use it at all really as a traditional preamplifier, and mostly just in situations that really call for a kind of garage band type of sound. When using only a single channel of this it helps to give you a better idea of what a single preamp on here sounds like, but most of the time we send a couple of signals in a once.

You're definitely not going to find many Ampex MX-10's out there any more. I don't know the exact year that these were being made, but it's definitely been a long time since one was. I can't say that this would be something I would recommend seeking out, but if you do have access to one it's definitely worth messing around with a little bit. It can get some really cool sounds that will work when used properly and in the right situations. Sadly, it doesn't see very much use at the studio, but it's still cool to have around just in case some one is going for that garage band kind of sound...