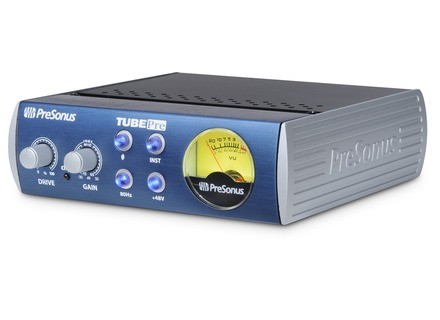 All user reviews for the PreSonus TubePre V2

Hyrius's review (This content has been automatically translated from French)" does its job without! (C it already)"

PreSonus TubePre V2
3
so it is a small analog péampli lamp (1x 12AX7) not rackable.
It contains the basic functions of a preamp:
- A filter to 80hz lowcut
- Phase inversion
- Instrument / mic
- +48 V
- A gain knob
- A drive knob
- And a VU meter for output level
all for a rear connector is in / out jack or XLR

the configuration could not be more simple and basic as described above.
Regarding the manual: not read (and frankly even a big neophyte does not have utility)

this is where it goes bad: the sound is transparent over the nothing to say ... unless this is pretty breath created by this little beast. NEVER exceed 15h/16 (about 30 db) on the gain knob, whatever the source (anyway, unless you have the most rotten mic with a mouse recorded z'aurez not need to climb higher ). Curiously enough, the lamp! She brings a real color! NO kidding! It is useless, I tried with several sources (vocals, guitar, bass, synth ...) nothing. Go I'll be a little less radical, by changing a mesa just for fun, I finally got a slight improvement in harmonics.
The filter is effective as well as phase inversion.
In short, if your goal is just to raise the level, he will make his taf perfectly but for one who wants to buy a preamp will it added harmonics that tape live in Eureka Presonus if he wants at all costs.

I use it for more than a year and the last 10 months just to raise the level of one of my skyscraper whose levels tire (the old lady to 42 years) and that it does its job.

I have tested the Berhinger, Art, Joemeek, SPL, Presonus, Neve, Avalon and is a preamp for beginners 100% (I know it was unnecessary to specify what .... but still) .

its look bioman the Presonus
its simplicity

this lamp is pretty in the machine.

the worst is that I think I do not even regret having bought a Berhinger as compared to the same price, it is really less disgusting (even if it is not hard) so for value for money it is honest.

That is to summarize, a small machine according good that is desired.