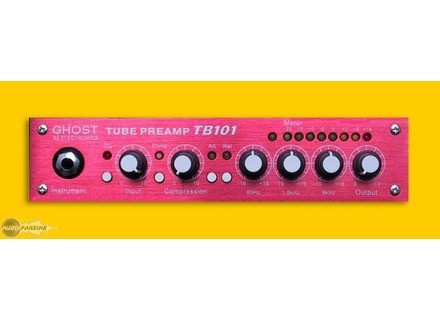 All user reviews for the sE Electronics TB101

sE Electronics TB101
5
The SE Electronics TB 101 is a single channel tube based microphone preamp that has built in compression and EQ.  It is an analog piece of gear that has XLR connections and a 1/4 inch input in the front for plugging your instrument straight into it.  This isn't a rack mountable piece of gear...

The make up of the SE Electronics TB 101 isn't hard to follow at all.  It simply has knobs for input level, compression, output, and three bands of EQ set at fixed frequencies (80 Hz, 1.8 KHz, 8 Hz).  It also has buttons for a -20 db pad, compression in/out, and also for attack and release.  That is pretty much all that there is to this, so I don't think that a manual is needed unless you are new to channel strips.

The sound quality of the SE Electronics TB 101 is quite good overall.  While I'm a bigger fan of the preamp over the compression and the EQ, all of the above sounds pretty good.  I've used the pre with a few different microphones to record a number of different instruments whenever I am looking for a nice and warm tube sound and I find that this definitely does the trick.  This definitely isn't my favorite tube pre, but for a small unit like this that has both EQ and compression built in, this pre sounds pretty darn good.

I've been using the SE Electronics TB 101 for about two years and while at first I didn't expect much from this piece of gear, I have definitely enjoyed using it.  SE Electronics is best known for making microphones rather than mic pres, but they have done a great job here.  While these aren't all that readily available, they can be found and don't cost entirely all that much money, making them great for home studios and professionals alike.  Overall, the SE Electronics TB 101 is an impressive mic pre that has a slew of features that are not often found in this form.