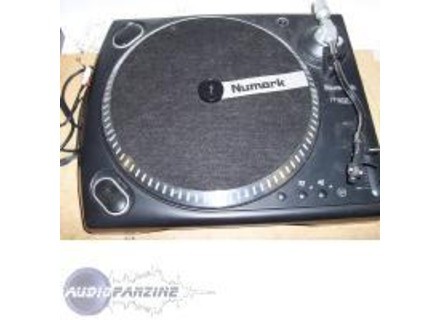 TT1625, Turntable from Numark in the TT series.

It's my first vinyl deck and I had never used one before.

The pros: It's not expensive and it comes with a cartridge (it's an entry-level one, but it's okay to start out)

The cons: Its weak torque, even when you are a beginner you can feel it lacks power, the arm is also very light and has a tendency to skip, while the deck produces a lot of feedback (when you tap the deck with the fingers you can hear noises coming through the speakers).
But I've read even high-end Numark turntables have a very limited lifespan, so I don't recommend this brand.

Its value for money is not bad, even if I would rather recommend beginners the rp 4000 by reloop or a stanton.

I would certainly not buy it again. It was the turntable that helped me when I started mixing vinyls, but now that I have to change my gear, I think I'll go with a Stanton or a high-end CD turntable.
Did you find this review helpful?yesno
»

Numark TT1625
4
The Numark TT1625 would be a great turntable for beginning DJ's, and anyone making the transition from a Digital DJing setup to Vinyl. It's a direct drive model, meaning that the table is turned by a motor instead of a belt. It comes standard with a Numark needle and cartridge, though I upgraded to a better quality one. It's a good deal for anyone who is just starting out with DJing and needs an affordable and functional turntable.

The table is durable and has survived being bumped around and a coffee spill. One thing the table lacks, however is a pitch lock, so sometimes the pitch can fluctuate. It also lacks a target light which could make it harder to read the grooves on the record in a low light setting.

You are able to change the tone arm from a straight model to an S, for different applications like scratching and such, and the built in on is pretty good, nothing special. It's a pretty light unit too, made of plastic, but still pretty durable. I would probably upgrade the tone arm if I were to DJ at a gig with these. If your not a DJ and just need a nice turntable for the house this would be PERFECT, especially because it's well suited to a home environment where things are moving and bumped and spilled.

Overall this is a good deal. I bought a pair of them for 300 dollars and use them in my practice space all the time. They were definitely worth the money. I use them with vinyls and time coded vinyls with my laptop sometimes. If you need a set of starter decks, or a good turntable to play your old records on, these are a great deal, especially considering how durable and affordable they are.

The Acid Life's review"For beginners only"

Numark TT1625
2
How long have you been using it?
I used it one year, it was secondhand. It allowed me to take my first steps into vinyl mixing. After two months I could already mix and do some tricks with it.

Did you try any of other models before buying this one?
Back then, no, it was my first turntable. i currently have a technics sl-1200, so my review will be based on my current experience.

Which feature do you like the most / the least?
I didn't like anything that much, it was sluggish, the pitch lacked precision and, the cherry on the cake, I only used it about a year or so because it stopped working correctly.
The motor was a real pain and could suddenly stop after 10 minutes or one hour of use.

How would you rate its value for money?
It's an entry-level product, so don't expect any miracles, it's OK to learn how to mix but you can move on to something else as soon as you know how to mix two records, in order to learn more technical things.

Based on your experience, would you buy this product again?
No.
Did you find this review helpful?yesno
»

Numark TT1625
I've been using it for over a year now and it seems to be too much for the turntable, it can't handle it anymore.

it's not a turntable for mixing, at worst to listen to your records at home

it was my first turntable (the numark pack, which I strongly advise you against)

I'd rather not say anything about its value for money.

I would never buy it again. I recommend beginners to save a bit more and get a reloop mk6s or a citronic, which aren't much more expensive and have a really good torque and more power than this piece of crap from numark.
I give it 1/10 because I'm nice, but even that's too high a rating.
Did you find this review helpful?yesno
»
Read the 7 user reviews on the Numark TT1625 »