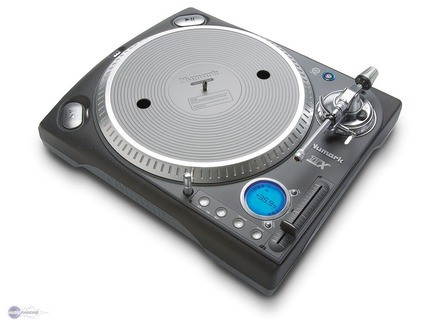 TTXUSB, Turntable from Numark in the TT series.

Numark TTXUSB
5
The Numark TTXUSB is a higher end USB turntable that over shines the previous models from Numark. The TTXUSB is way better built than any other USB turntables that have come out recently. It has a high torque direct drive. You can adjust the pitch, and it comes with a BPM counter and key lock. The TTXUSB is also more expensive than the other models. The TTXUSB cost 400 dollars, which could be a bit overpriced if you are just getting a turntable to convert your vinyl to MP3 with.
Setting up the TTXUSB is simple, and it comes with instruction to install the cartridge. But take note that the cartridge which is a (CC-1) cartridge does not come with the turntable. I am not sure why they would not include one with it, especially at this price. The TTXUSB has a LED screen that will show you the BPM, RPM, and pitch settings. It can play at all 3 speeds including 33 RPM, 45 RPM, and even 78 RPM.

The downfall of this turntable is that it does not come with the cartridge that it needs. The cartridge that it needs is a Numark CC-1 and that cartridge alone cost 70 dollars. That means for the whole set up it will cost you a total of 470. I do think this turntable is great, but it is not for someone who is just using it to transfer files to the computer to get your vinyl into MP3 format. It is more for someone who is an actual DJ and does scratching. It is just a plus that it has a USB connection to it. It is well built and can take a lot of DJ use. If you are a DJ then this turntable is great, it is a plus having the USB connection on it to incorporate it in with your MP3 set up. It also comes with a user adjustable high torque direct drive motor. I have been using this since 2010 and it still looks brand new!

dj remy's review (This content has been automatically translated from French)" Reference on the market today!"

Numark TTXUSB
4
I have two TTX, including one with the USB that I bought last year.

I actually like a lot of old DJ'S a pair of TECHNICS SL 1200 MK2 that I kept for over 25 years and I sold because I was using more, preferring to mix with CD.

No longer able to listen to my old vinyl so I bought there six or seven years one of the first TTX that has served only to read my vinyls I encoded. I'd be satisfied until it fails.
In fact this board has "tight"! Yep!
Its central axis directly dependent on engine is off while I was cleaning a disc rotating hand set! A shame when I think!

This is a priori a known incident and recognized users of the plate (frequent cases in my dealer).
I finally! ... So I do repair (250 Euros change this part of the engine anyway) and in the meantime trying to encode discs and not being on the deck would be repaired so I bought a USB TTX.

This plate became the reference in place of the legendary TECHNICS SL 1200 works well.

The BPM display is clear and precise and double buttons on / off, arranged angle are very convenient.
In short it's solid and it has become the reference in my deserved.

If you own TECHNICS you will not regret the change especially that TTX has no breath parasite, which was far from the case TECHNICS!

For USB, nothing to say, it is convenient but personally I do not use this function preferring encode my vinyl records directly to my computer without going through the little software that came with the board. I used it for SOUND FORGE.

Personally I wish it has a cover (as formerly the TECHNICS) that would prevent it from gathering dust that tends to become embedded in the rubber coating of the plate and pretty dirty too quickly quickly (hello hassle to clean it later).

Numark TTXUSB
4
- How long have you been using? About 1 year

- Did you try many other models before buying it? Reloop and technics (non-proprietary)

- What is so special that you like most: Ability to change the position of the pitch, the line output, torque and engine speed variable pitch, right arm or S

- The least? The aesthetics of the plate

- How would you rate quality / price ratio? This is a very good turntable I bought Technics wanted but the price is downright abuse of the new and the opportunity especially since the cessation of production. One day I came across the Numark TTX USB from a dealer hand and I do not hesitate. And I do not regret since.
Did you find this review helpful?yesno
»

nak'ma's review (This content has been automatically translated from French)" Impressive but exploding:)"

Numark TTXUSB
4
for quite some time, Good turntable, a compact, but very good features in all!
Did you find this review helpful?yesno
»
Read the 8 user reviews on the Numark TTXUSB »

See all 203 photos of Numark TTXUSB »