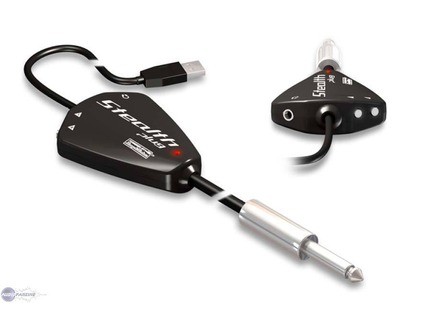 All user reviews for the IK Multimedia StealthPlug

Average Score:3.0( 3/5 based on 6 reviews )
Not satisfied with those reviews?
Our members also liked:

IK Multimedia StealthPlug
4
good product; strong enough. I wanted a simple interface walkthrough without a big Becane a plug on the sector; there is USB; plug and play; ca start immediately.

Not tried with other apli that AmpliTube; but the whole is very convincing.
on the other hand it is very noisy especially distortion. Fortunately there is a great noise adjustable gate.

It took me some time to realize that the program was designed really well because initially I was very skeptical about Amplitube.

Installation not so simple with lots of customer codes to fill .. it's painful.

The basic program comes with; namely AmpliTube is anyway quite genial..sinon the best time ..
The sound quality is top ..to work at home or on the backing track is perfect.
Did you find this review helpful?yesno

kawas's review (This content has been automatically translated from French)

shame!
Did you find this review helpful?yesno

francoisqueinnec2's review (This content has been automatically translated from French)

IK Multimedia StealthPlug
1
I bought this stealth plug to have a good connection between my guitar and my PC for testing and modeling software such as Amplitube ...
And eventually, to complete my palette of sounds when recording ...

Installation without any problem
However .. impossible to play on top of another application .. because the stealth plug comes out the sound of the guitar in his headphones and not the other sounds ...
Clearly video to play on a pedagogical or an MP3 over, connect the output of the stealth plug to the audio input of the PC ... Feedback and hello to boot :-(

It is the breath we hear when we do not play and that is connected with the stealth plug on AmpliTube 2 Live (which comes with) ...

If the amp models 'clean' ca remains almost discreet ... Any 'gain pushed a little' or any stompbox overdrive bring this horrible blast unbearable levels ... (like, a breath half the volume of the guitar) ..
There is a noise gate ... but with this level of noise, you are playing, you can clearly hear what was blowing very hard ...

I test several guitars, including one with EMG81 (famous ultra-quiet) .. always the same!

In short, useless for something serious ..
To train when you have a PC at hand .. ok ...
No way to record anything with an unparalleled

And if not, to top it off .. even on a PC powerful enough all the same (a 2.2 GHz dual core!), latency very 'sensitive' even in the set to the minimum

always the problem of latency can be set in the Control Panel stealth plug the number of buffers: The more, the more stable CEST (no unwanted clicks), but the more delayed latency ( lag between the time that we play and hear the sound o) .. 512, the sound is stable, but the latency is really important and feels great .. to 300, the latency starts be acceptable, but is paid well for ticks that come spoil the sound Jai performed this test on 4 PCs (the mini-notebook as the big quad processor Atom 3Ghz), including 2 that are really powerful trs on XP, on Vista 48Khz, 44.1Khz in, jai tried everything possible to reconcile and correct latency stable

Concerning the problem of breath .. jai tried everything .. still the same problems: the breath, the breath of the breath and let this breath is highly amplified by the simulations dampli .. Unfortunately, no need to push the bottom to gain quil become invasive with a good simulation of JCM800 and a good gain reasonable style ACDC, cest dj too
Oddly, with software quAmplitube else (guitar rig 3 and jai ReValver that could be tested in demo version), the problem is much less! and ca is almost usable (except with respect to latency issues / plays)

So I maintain: this thing is a toy and can not do anything serious enough to sentrainer Cest with the headphone if you have nothing else but the asarrete!

No, I will not repeat that choice!
clearly! It is a toy that thing!
Did you find this review helpful?yesno

-Installation niquel
-No incompatibilities
-Very easy to use

-6 Months of use
-Assets: price and if you want to test an effect before you buy a pedal, it's ideal
-Cons: cheap cable a little, very slight lag, not comparable with a real foot in the
"I have a rack with a few boss pedals and I was a bit tired of all these cables

so I tried the cable but in the end, the pedals are in their places and trailing cables in a box. So no, I will not repeat that choice.
Did you find this review helpful?yesno

aokle's review (This content has been automatically translated from French)

IK Multimedia StealthPlug
5
What motivated me during the purchase of StealthPlug is the price, ease and content of the box. Let's say I used Virtual Intruments level, while I Top quality, except the guitar. So I bought this little tool to save myself.

No problem during installation. It runs very well with FL Studio 5, Cubase etc.. In the manual (I opened it anyway:]) you have instructions for use with Acoda, Cubase and other apps. For FL Studio, nothing in the manual but it's really not complicated.

The drivers seem to me stable, at least, it did not crash at my place. No upd expected, finally, if it works, I do not see the point, especially when you have a latency of 0 ms.
In fact, I hallucinated that the latency is zero ... In short, we can record as many tracks as you wish, as long as it does not row:]

I put 8 / 10 because the use is almost perfect, but not very ergonomic. Note also a slight difference between listening via the headphone output of the machine, and listening with my old 4.1 that restores the sound to perfection. I have yet to find aps with the Amplitube LE, and sometimes it's frustrating.

It's been almost two weeks now I have my home, and I appreciate more and more perfect for the return of the light. You can play with Amplitube, Trash, Legend Rocks Amp, or its own amp. Nan's great ^ ^

I think I will remake this choice, especially when we see a ton of software they offer with ^ ^

9 / 10 because the saturation of AmpliTube Live are sometimes loud.
Did you find this review helpful?yesno

Goodvibz's review (This content has been automatically translated from French)

- For what purpose?
To use the standalone version of AmpliTube 2 and Guitar Rig 2.

- Which instruments or Systmes (console, prampli, DTD ...) you use it and how connections? ...
Electric guitar and bass.

No problem for installation.
No need for manual, quickstart guide only.
The control panel is simple (latency, Volume Input, Output and Direct Output.)

For that I use is stable.

I use it for about two months, what I like least is its low flexibility, I AIM it can be declared as the Windows sound card and the output used for monitoring, This is not the case. To remdier I exit the loop StealthPlug between the Line of my other sound card (Fortissimo II).
View the use that I made, I regret my purchase but a little j'aurrai the SAVE and buy Guitar Rig 2 with its pdalier that can do the same thing.
However the report is qualitprix trs good
Did you find this review helpful?yesno
Cookies help us improve performance, enhance user experience and deliver our services. By using our services, you agree to our use of cookies. Find out more.