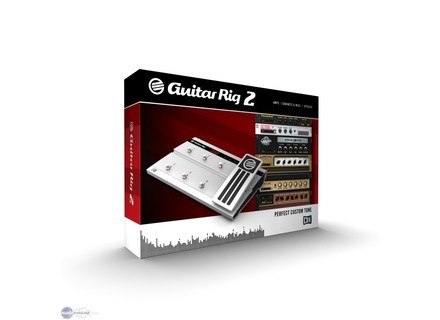 Native Instruments Guitar Rig 2
4
Installing Native Instruments Guitar Rig 2 was easy and was done without any problems. It is easy to install on either a PC or Mac systems, as I have done it on both. I haven't had any compatibility issues running it with both Logic and Cubase, as well as stand alone. I haven't had access to a manual so I don't if it would have helped me learn the program better or not.

I run Guitar Rig 2 with a Mac Book Pro that has 2.2 Ghz Intel Core 2 Duo processor and 4 GB of RAM. I use this mostly as a stand alone program, but also use it a lot in Logic and used to use it Cubase SX 2.0 a lot. Except for a little latency sometimes, I have never had a problem using this in any of those situations. Running a few of these at once will undoubtedly make your computer run a bit slower, but when used in moderation I have never had a problem with it.

I've been using Guitar Rig 2 for about two years, and I used Guitar Rig 1 for awhile before using this one. Overall, I think Guitar Rig 2 is a very useful program. The sounds range in quality as I think the delay and modulation effects are much better than the overdrive ones. I'm not a fan of digital distortion, and as good as Guitar Rig 2 is, it is no exception here. The price is somewhat reasonable as it is an extensive piece of software. It is more in depth than other guitar modeling programs like Amplitube, and is comparable to some of the other ones in its price range. You can get almost any type of guitar sound you can think of - overdrives, delays, reverbs, phasers, and everything else. The quality of the effects ranges, but overall Guitar Rig 2 is a great piece of software which plenty of practical applications.
Did you find this review helpful?yesno
»

Native Instruments Guitar Rig 2
4
It installed on my computer with no problems. I didn't have any issues with compatibility, because Sonar accepts VST as well as DX versions of plug-ins. Guitar Rig is very easy to set up, the installer doesn't take very long and you are walked through it every step of the way. The only thing that could be confusing is the serial key entering, which is a little different from most companies, but it's not really hard to handle. The manual is pretty detailed, so I think it's all good there.

I have a custom built audio computer from Sweetwater which is about 6 months old, so it is a pretty top of the line system. Guitar Rig works very nicely on it. It doesn't use too processor power so you could definitely run a bunch of these if you wanted something like a wall of guitars effect, or just a lot of lead guitars playing at once. It seems to be very stable, it hasn't caused any problems that I remember.

I have had Guitar Rig 2 for years. I haven't gotten the upgrade to version 3 because honestly I think GR2 sounds great and I am perfectly satisfied with it, so I don't see the point in spending more money. You have a huge choice of different kinds of amps and amp heads, all kinds of different rack effects and stomp boxes, you can tune your guitar with it, and the samples of presets that they give you are killer. You can really pretty much create and guitar tone you could dream up with Guitar Rig, and then you'll find some in the presets that will blow your mind. It's true that it doesn't sound quite as good as a real amp, but it comes very close. In a dense mix, it would be very hard to tell the difference. I really like this plug-in and I think it's a great value. I would get it again.
Did you find this review helpful?yesno
»

evoly's review (This content has been automatically translated from French)

Native Instruments Guitar Rig 2
5
No prob, I found the demo version on the site while native Amplitube 2 is still pending. The following notice is therefore on the demo.

Exemplary stability but guitar rig 2 consumes CPU! But what else seen the wealth effects and possible configs?

After the demo of Guitar Rig 1, I waited to see what native propose as serious update:
First, what was the strength of the version 1 is still there: TapeDeck, hyper interface intuitive, clear sounds unbeatable, split over two independent channels ....
The pedal was very cheap though has been redesigned (not available in demo version

)
The number of presets is quite big at last! .. And they are widely usable.
Section distortion is much decried as compelling, rich timbre available seems endless, the grains are well defined on large tearing ... GR 2 is modeling at a level impressive.
Finally guitar rig 2 can be used beyond its intended strictly guitar (knowing that a bottom section was added but this one seems a little cheap): Voice, delirium effects of all kinds with an FX section that rocks! (Addition of the filter) etc ...
Short of any good, I buy. Native Congratulations!
Did you find this review helpful?yesno
»

duchnouk's review (This content has been automatically translated from French)

Native Instruments Guitar Rig 2
5
The installation is done it without problems?
Installation without any problems. No problem. Everything is very well done

I have a powerful PC x2 4400 2GB RAM, stable under win xp pro. Emu 1820 M
Cubase SL 3
Voilala
Everything is perfectly stable
I drooled before you get here but well worth it. make music in these conditions it's cool. Remains for me to learn music theory and find the "do" on my piano!

Joking aside, I will test on my laptop I have to buy in a few days. You then say

I received this morning, tried two hours hours
I had a guitar rig. Mmmmm. The two is much better for distos, and the rest too. The content is pretty crazy, y 'is something for all tastes. The rig Kontrol 2 is very ergonomic. I tested the integrated sound card. few options but no breath. latency inexistent. Effects are incredible. I will explore to get some nice sounds with my guitar electro acoustic nylon. With the AC power while tears. and yet I only used the presets so far. Do not hesitate. This is an incredible value for money. If you need inspiration, she comes alone!

A +
Did you find this review helpful?yesno
»
Read the 16 user reviews on the Native Instruments Guitar Rig 2 »